A Minneapolis city council committee has rejected a neighborhood appeal of the approval for an apartment and office complex at the Sons of Norway site in Uptown.

The city’s Zoning and Planning Committee made the decision at its regular meeting Thursday, and while much of the testimony about the project was in opposition, the proposal also drew supporters. In fact, some of the same elements that drew concerns from neighbors attracted praise from supporters, including the size, the height, and the density.

The committee vote wasn’t unexpected. Neighborhood opponents, including the East Calhoun Community Organization, had made similar arguments at the Planning Commission Jan 22 — and met with a similar lack of success.

The project, led by Ryan Companies with Wiedner Apartment Homes, is for 317 apartments, restaurant space plus a new home for the Sons of Norway. It would also have 320 parking spaces and a 10,000 square-foot green space with a water feature that will be called The Fjord and be available to the public.

The project would be built on property now holding a handful of buildings plus lots of surface parking that is bordered by Lake Street, 31st Street, Humboldt Avenue and Holmes Avenue. The site sits one block from the commercial intersection of Lake Street and Hennepin Avenue and just four blocks from Bde Maka Ska.

That makes the project something that the city sees as important, part of an effort to further densify one of its densest, most-urban neighborhoods. But it is also represents what neighbors fear is an encroachment of multi-family housing into what has been an area of single-family homes and duplexes.

While many of the opponents spoke of traffic, high rents, corporate exploitation of the neighborhood and pedestrian safety, the issues before the planning and commission and council were legal and technical. Ryan was asking for land use permissions, including the rezoning of part of the site for more-intense multi-family development and the issuance of a variance to increase the amount of the available land it could build on.

The leader of those seeking to halt the project, Lara Norkus-Crampton, kept mostly to those issues. That the project needs so many land-use changes indicates just “how far out from the intention of the underlying zoning that this project is and how many exceptions to the zoning have to work to make it happen.”

Much of the concern was about how the project will affect 31st Street, which is shared with many single-family homes. The city’s 2008 small area plan envisioned buffers to ease new developments into the existing neighborhood.

Erika Brask, who lives with her family near the project, she said she worries for her daughter’s safety on streets that are already busy. “I stand here today despite being told how hopeless it would be,” Brask said. “How my voice wasn’t going to be heard. But nevertheless, I will persist.

“This is so far out of proportion,” she said. “I hope that you truly can look beyond parcels and zones and lots and masses and density and buildings and see the buffer that we really need between the commercial corridor and legitimate, real families.”

Dane Stimart, who also lives near the project site, said the council action would set a global precedent. “I have no doubt that if this current Sons of Norway project is approved, that your decision will signal to these global profit-driven development firms looking to laugh past our thoughtfully created community zoning and density balance,” he said. Approval would send the signal that “our community and our city are for sale to the highest bidder.”

But many supporters of the project also showed up for the hearing. One, Joe Huber, pointed out the project was initiated by a longtime local institution, the Sons of Norway, and that Ryan is locally based as well. Huber complimented both organizations on their community outreach and said the project fits in with a dense, urban neighborhood.

“A lot of people discussed the traffic that this development will cause and, yes, there is traffic in Uptown,” he said. “We live in the city and that is the price you pay to live in a vibrant area.”

Huber also looked more broadly at how the region will accommodate population growth, saying he prefered it in dense areas of the cities rather than as part of suburban sprawl.

When it came time to vote, Council President Lisa Bender, whose Ward 10 includes Uptown, said the underlying zoning would have only allowed 38 units on the parcel that reaches to 31st Street while the Ryan plan places 155 in that section.

“This is probably one of the most-desirable neighborhoods in Minneapolis,” she said, complimenting it for the amenities and walkability. 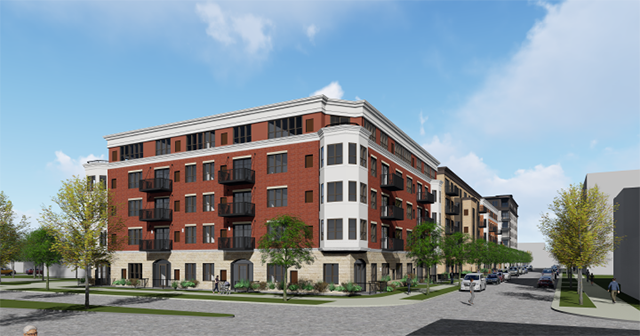 Weidner Investment Services
A rendering of the Sons Of Norway south building.

But she also noted that the site is large and underused. “It’s a surface parking lot in the middle of the city. We knew it was going to redevelop,” Bender said. “The big question is how many people get to live here.”

At the previous density, a project would likely have been one of fewer but far-more-expensive homes, she said. “I can’t in good conscience as an elected official of the city of Minneapolis force a developer to build multi-million dollar homes in this location,” Bender said.

Single-family homes are getting more expensive but many of the units in the proposed building are two-bedroom and could accommodate families. “This will allow some more options in a neighborhood with so many amenities,” she said.

Council Member Lisa Goodman opposed the project, not for its size and density on Lake Street but for how it treats 31st Street. Yes, Goodman said, 38 units there is too few but 155 is too many based on the small area plan. The proposed building is five stories, and across the street from houses.

“I don’t think it is really open to interpretation that five stories stepping down to two is not a graceful stepping down that the small area plan suggested,” Goodman said.

She called those small area plans a contract with the neighbors. “If this building was one story less I probably would support it,” Goodman said.

The final decision is made by the full council on Feb. 23, but it is rare that the council reverses a decision made by its zoning committee.

At the same meeting, the zoning committee upheld another planning commission decision: the denial of changes sought by a developer of apartments and an ALDI grocery store at Lyndale and 26th. The developer had sought a larger floor area ratio — essentially the amount of usable space in the structure — in order to add 11 apartments to the building named for a former hardware store on the site.

The council agreed with the commission, which felt the developer sought to return to a project that had been rejected earlier. The need for the additional apartments was driven by economics rather than practical or site-specific considerations. That is, changes in design for ALDI increased the building’s cost making additional rental units necessary.