If St. Paul City Council members weren’t already inclined to support a city minimum wage ordinance, they received a whole batch of reasons Wednesday to push them in that direction.

Citing a recent report by the Metropolitan Council, the head of the Citizens League told council members that St. Paul has the region’s highest percentage of people living in poverty at 40.8 percent. The same report found that the number of Census tracts in the city identified as being areas of concentrated poverty increased from 32 in 2006-2010 to 38 in 2011-2015.

Other calculations show that living costs are higher in Ramsey County than in the state, and council members already are wrestling with an ongoing shortage of affordable housing — especially for those at the lowest incomes. All make the elected officials sensitive to calls for higher wages and all were the starting points for the Citizens League study of the potential impacts as well as the likely concerns posed by a higher wage within city limits.

The report was based not just on statistics but on listening sessions and interviews conducted by league staff with workers and employers, unions and industry associations, nonprofits and advocacy organizations.

Without trying to resolve often irreconcilable differences of opinion — that’s what the seven council members are for — the study led by Executive Director Pahoua Yang Hoffman pointed out the bumps in the path. For example, some Hmong-American merchants with very small businesses — sometimes simple booths at markets — asked for more distinctions among employer size than the over-100 workers/under 100 workers used in Minneapolis.

Health care services that are reimbursed by state and federal funds worried that they won’t get a corresponding increase in rates just because the city they are in has a higher wage. Food franchises and even small bookstore owners said their prices are set by others — the fast-food companies and publishers respectively.

Those who employ disabled workers and youth workers told the league they might not be able to employ as many if they too are covered by a higher wage. And some business owners said they are facing regulation fatigue from federal, state and now local mandates that increase their costs. There was the Affordable Care Act, the state minimum wage, the city paid leave ordinance and now a city minimum wage.

“Many small businesses felt that over the last four or five years they’ve had to accommodate for these changes,” Hoffman said. “Four years might feel like a long time but for them it was yesterday … they were very disappointed that the city of St. Paul may be considering a minimum wage increase.”

Who benefits, who doesn’t?

The report also looked at employment data to gauge how many residents of the city would benefit. The Roy Wilkins Center for Human Relations and Social Justice reported to the league that of the 129,232 working St. Paul residents, just over 40,000 worked in the city and could benefit from a higher wage. Another 25,000 worked in Minneapolis with its higher wage level. The rest would remain under the state minimum wage. 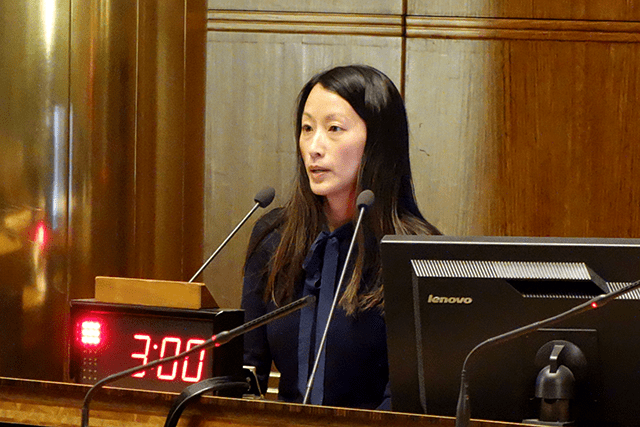 By contrast, of the 176,000 people who have jobs within the city, only 40,000 are St. Paul residents. The rest are nonresidents who might see pay benefits from a higher local minimum wage.

St. Paul will also have to resolve the issue of how to treat tipped workers, with advocates in attendance at the council study session Wednesday calling either for a tip credit or “one fair wage.”

While many of those in the room were representing minimum wage advocates such as $15 Now and Centro De Trabajadores Unidos En Lucha or CTUL, there were also some restaurant workers who support having a tip credit. Under that system, restaurant owners can use tips to make up the difference between the state minimum wage and whatever level the city sets. Tipped workers would be guaranteed at least $15 per hour and could earn more if tips are taken in in excess of the minimum wage. Nontipped workers such as cooks and dishwashers would be paid the city minimum wage.

But what advocates call a tip penalty was the primary point of contention in Minneapolis and will likely be in St. Paul as well. Minnesota is one of seven states that does not allow a tip credit for tipped workers in the state minimum wage and “one fair wage” has become a rallying slogan for $15 Now and national groups like the Restaurant Opportunities Center.

Catherine Olsen is a tipped worker who attended Wednesday’s meeting. “I’m here today to ask the city of St. Paul to pass a $15 minimum wage with no exemptions — no tip penalty and no youth wage.”

Matt Gray is a server at W.A. Frost in St. Paul and he said he worries about the economic impact on restaurant and bars in the city of a non-tip-credited minimum wage.

“I know personally a lot of local restaurant and bar owners who are working on narrow, thin margins right now,” Gray said. “A more than 50 percent increase in labor costs is going to cause them to have to shut their doors. These are the people who make St. Paul what it is.” Jeffrey Crandall, a bartender on W. 7th Street, said he worries that owners will shift from tips to a service charge. While tips stay with the server, a service charge is kept by the owner.

Minneapolis did not include a tip credit in its final ordinance and has a relatively limited provision for youth employment programs. Only employers participating in a city-approved training or apprenticeship program may pay workers under age 20 a training rate no less than 85 percent of the municipal minimum wage. That wage can only be paid for 90 days.

It is not a surprise that nearly all of the issues facing the St. Paul council were played out when Minneapolis took the lead last year. Minneapolis has so far defended the wage from court challenges, winning rulings that cities do have authority to act independently from the state. That provides some legal cover for St. Paul.

But Council President Amy Brendmoen told those who crowded the council chambers Wednesday that even though many of the issues are the same, St. Paul will conduct its own examination and its own process. 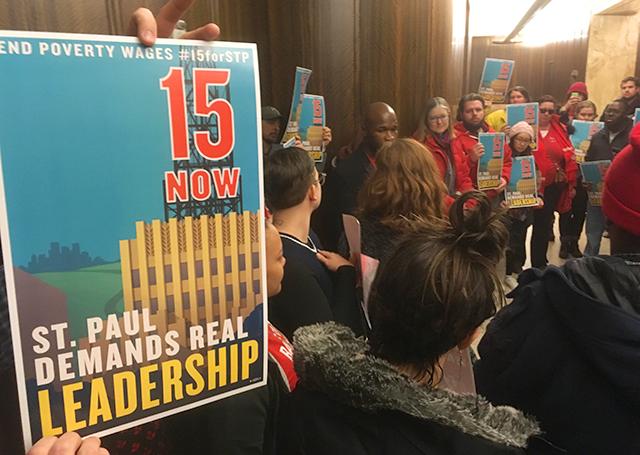 MinnPost photo by Peter Callaghan
Many in the council chambers were representing minimum wage advocates such as $15 Now and Centro De Trabajadores Unidos En Lucha or CTUL.

“Sometimes our neighboring city Minneapolis takes progressive action, sometimes a few months before we do and the advocates go through all the work in Minneapolis and they come to St. Paul and say ‘we’re ready,’ ” she said. “We need to take the time to pause and ask questions and understand it in the context of St. Paul. I appreciate people’s patience as we’re asking these questions.”

Brendmoen said she expects the council to take up an ordinance in the fall, calling that schedule a “pretty fast track.”

“We’re all going to get to know each other a lot better over the next few months and see a  lot of each other,” said Council Member Rebecca Noecker to those attending. She said she hopes the conversation will go beyond passions and reach into a discussion of the city’s values.

“We have to dig into the details when making policy, but it is important to keep in mind that this is ultimately about our values in the city,” Noecker said. “It’s not whether or not we should have a minimum wage … but what should that minimum wage reflect. What should it be and what should the outcomes of having one be for people.”

Hoffman stressed that many of those she spoke with saw the higher minimum wage as just one piece in a campaign to resolve issues related to poverty.

“They know and they realize that an increase in the minimum wage does something but not everything,” Hoffman said. “They want a more-comprehensive and  holistic approach to lifting people out of poverty.” That would include affordable housing, better transit and child-care assistance.

The work so far has been paid for with a grant from the St. Paul Foundation. The city and the league could ask for additional help to conduct more work answering questions raised so far and in getting more comment from residents.

In report on effects of St. Paul minimum-wage hike, echoes of Minneapolis debate