The 2018 election unofficially kicked off in Minnesota Tuesday evening, as tens of thousands of Minnesotans piled into their local school gymnasiums, cafeterias and community centers to signal their preference in the open race for governor and debate the core values of their chosen parties.

It was precinct caucus night across the state, when the Democratic and Republican parties organized gatherings to start the process of selecting candidates in the upcoming election, which will feature an open governor’s race, two U.S. Senate races, three constitutional offices, all eight congressional seats and the Minnesota House on the ballot.

But the governor’s race was the star of Tuesday night, with attendees at both parties’ caucuses casting ballots in a statewide preference poll. As the results trickled in late Tuesday evening and early Wednesday, DFL U.S. Rep. Tim Walz emerged the victor on the DFL side, with more than 30 percent of the vote, and State Auditor Rebecca Otto came in second place with more than 20 percent of the vote.

“A straw poll isn’t everything, but we’re so encouraged to see support for our positive message from across the state,” Walz said in a statement. “I’ve coached enough to know that we can’t take anything for granted — these results are no exception.”

“Though just a snapshot in time, Republican voters across the state made their feelings extremely clear,” Johnson said in a statement late Tuesday. “By every indication we are uniting the party and winning over the large majority of Republican voters in Minnesota.”

But both sides of the race are far from settled. All told, nearly 16 percent of Republican caucus goers said they were undecided on a gubernatorial candidate, while more than 12 percent of Democrats said the same. The results of the preference ballot are not binding, and all candidates still have a shot to take the lead at the parties endorsing conventions, which will be held in June.

In 2014, the last governor’s race, Marty Seifert won the Republican caucus preference poll but went on to lose the endorsement to Johnson. In 2010, the last open governor’s race in the state, Minneapolis Mayor R.T. Rybak won the DFL caucus preference poll but lost the endorsement to House Speaker Margaret Anderson Kelliher. From the conventions, endorsed candidates must also still face off against potential primary challengers. In 2010, Kelliher lost the DFL primary to Dayton, who went on to defeat Republican Tom Emmer in the general election.

Whatever the results, Democrats were bolstered by their turnout numbers. With 72 percent of precincts reporting, party officials estimate 27,447 Democrats came out to caucuses Tuesday night, up from about 14,585 in the last midterm election, in 2014, when Dayton was the incumbent and the party didn’t hold a preference poll. In 2010, the last time the DFL had an open race for governor during caucus, 22,532 people voted in the party’s preference poll. 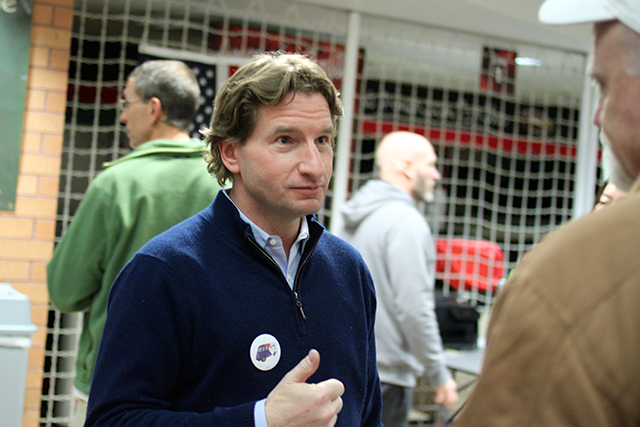 Republicans currently control the Legislature, and with an open governor’s seat, the 2018 election gives them their first shot in years at taking full control of state government. That possibility, plus the chance for Democrats to register their opposition to President Donald Trump, contributed to the high turnout for the DFL.

“Between this strong showing and our record-breaking fundraising numbers, it’s clear our party is heading into this pivotal election year with the energy it needs to create a blue wave across Minnesota,” DFL Party Chair Ken Martin said in a statement.

It was a much different story in the GOP caucuses. Republican turnout was at an all-time low, with 10,909 people showing up Tuesday night, down from about 14,109 caucus attendees in 2014. Both years featured an open contest on the GOP side of the ticket. In a statement, Republican Party Chairwoman Jennifer Carnahan said caucuses are the “first opportunity” for the public to get involved in the 2018 election.

“Tonight’s process gave the gubernatorial candidates an early gauge on public opinion,” she said. “We look forward to strong Republican performance in November and are excited to turn Minnesota red.”

In Eden Prairie, Republicans and Democrats were caucusing at the same location — the high school — and so many people showed up that the parking lot was full, with cars lined up and stretching along nearby streets. The suburban swing district has long been a target of both parties in legislative and statewide races.

On the side of the school where Republicans were caucusing, Woodbury Mayor Mary Giuliani Stephens walked around and shook hands and introduced herself. A late entrant into the race, Stephens emphasized her credentials as a suburban mayor and the importance of Republicans turning out in districts like Eden Prairie. “If we do not win suburban communities, the DFL advantage in St. Paul will be too strong,” she told the crowd.

Jack and Anne Roberts have been going to caucus in Minnesota every cycle since the 1980s. Children of the 1960s, Anne said they both grew up knowing it’s important to participate in government at all levels. “We like caucus because it allows us to get involved.”

This year is no different, but they didn’t walk in the door supporting any particular candidate for governor. They didn’t know much about anyone in the Republican field, and in particular, they were waiting to see if former Gov. Tim Pawlenty might jump into the race. On the same day as caucus, Pawlenty announced he was leaving his lobbying job in Washington, D.C., increasing speculation that he will run for governor. “Until we hear what he’s going to do we are undecided,” Jack said. “I think I would support him again. I liked him when he served as governor.”

On the Democratic side, volunteers were busy pointing caucus attendees to their corresponding precinct classroom. Two Democratic candidates for Congress, Dean Phillips and Brian Santa Maria, mingled around the room, greeting people as they walked in the door. Both are running for the chance to take on Republican Rep. Erik Paulsen this fall, but at one point in the evening, they embraced in a hug in the middle of a cafeteria.

DFL Rep. Laurie Pryor, who was elected in the district last cycle, said the last time there was an open governor’s race in 2010, the high school caucus location was almost empty. She thinks Democrats are more motivated this year by all the races on the state ballot and by Trump. “You look around here tonight and you think, there really is something happening here,” she said. “It’s exciting.”