It was less than 24 hours before a key deadline — and six weeks into the 2018 Minnesota legislative session — when Scott Newman finally got his bill in front of lawmakers for the first time.

But that’s often how things go with amendments to the Minnesota Constitution, Newman said. They’re a big deal, and it takes time to get people on board.

“Frankly, I didn’t know that the coalition was going to come forward in time to move on this year,” Newman, a Republican senator from Hutchinson, testified Wednesday infront of the Senate Transportation Finance Committee, where the bill was being heard. “It’s hard to get a lot of people organized and in agreement on any given issue.”

Newman’s proposed amendment would ask the voters this fall if they want to dedicate sales tax revenues generated from auto parts and repairs toward fixing roads, bridges, highways and other transportation projects. Currently, that revenue goes into the state’s general fund, where it can be used on anything from roads to health care and education programs.

Last year, as part of a transportation funding deal, lawmakers passed a law that dedicated sales tax dollars from vehicle leases and rentals toward transportation projects. But future legislators can still move those dollars back into the general fund if budgets are tight. By dedicating funds for transportation projects via a constitutional amendment, the money could only be redirected by putting the question back in front of voters in the form of a ballot initiative.

“This is a bill that conceivably, if it goes forward, is going to affect every person in the state of Minnesota and all of our constituents,” Newman said.

Newman’s sentiment was echoed by the 20 people who testified on the bill Wednesday, half of whom enthusiastically favored the measure, the other half opposed.

The coalition supporting the bill includes business groups like the Minnesota Chamber of Commerce, contractors and some labor unions, including the International Union of Operating Engineers Local 49 and the Northern States Regional Council of Carpenters. “This is the biggest job creating bill you can pass this year,” said Jason George, the legislative and special projects director for Local 49, noting that the total spending would amount to dedicating less than 1 percent of the state budget toward transportation. 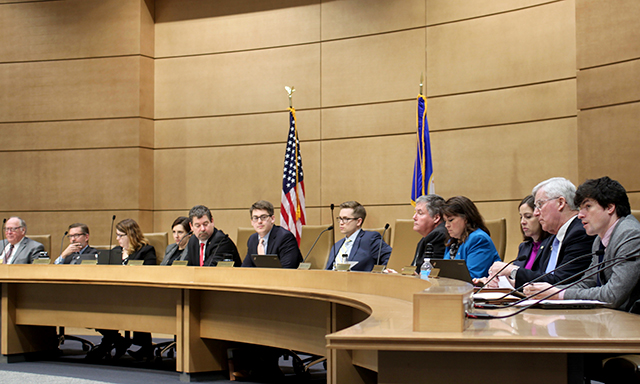 A group, Vote Yes 4 Roads, has already formed to push a potential ballot initiative if the bill passes at the Legislature. Polling that the group commissioned, conducted in January by Public Opinion Strategies, showed 76 percent of people support an amendment to dedicate in the constitution auto parts sales taxes for roads and bridges, with high support from people who identify as Republicans, Democrats and Independents. “We look forward to having that conversation with the public, and we would hope that the Legislature would give them that opportunity,” George said.

Not a new idea

Much of the state’s transportation network is funded through automatic revenue streams generated by the gas tax and other transportation-related fees. Only a small fraction comes directly out of the state budget.

To pay for transportation projects, Gov. Mark Dayton has proposed increases to the gas tax, which currently sits at 28.5 cents per gallon. But that idea has faced pushback from Republicans in the Legislature over the last several years. The last time the gas tax was raised was in 2008, after legislature overrode a veto from former Gov. Tim Pawlenty.

Abbey Bryduck, who works with the Associated General Contractors of Minnesota, a highway construction industry trade group, said the constitutional amendment would raise the equivalent of nearly a 9-cent increase in the gas tax. “The reality is in the past 30 years we’ve had two gas tax increases,” she said. “In 1988 we added 3 cents, and in 2008 we added 8.5 cents. It’s become pretty politically difficult to pass it.”

Lawmakers have also passed similar constitutional amendments before. In 2006, voters overwhelmingly approved a ballot initiative to dedicate the sales taxes generated any time someone purchases a car to roads and bridges. 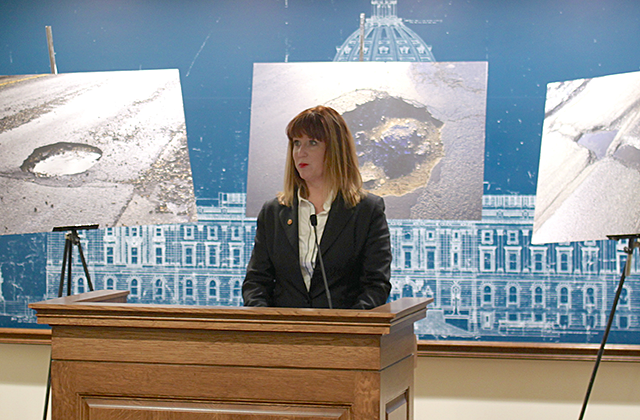 MinnPost photo by Briana Bierschbach
Abbey Bryduck, who works with the Associated General Contractors of Minnesota, a highway construction industry trade group, said the constitutional amendment would raise the equivalent of nearly a 9-cent increase in the gas tax.

“Since that time, we’ve seen an increase in the overall general fund budget, we’ve seen increases in funding for education, and health care and other areas of state government,” said Margaret Donahoe, executive director of the Minnesota Transportation Alliance. “We know that we can do this and not hurt other areas of state government. This is a small amount of money that we believe it makes sense to invest in our roads and bridges.”

But others who testified Wednesday were already firing back at claims made by the measure’s supporters, noting that several proposals from lawmakers this year would divert large amounts of money away from the general fund, including possible tax cut proposals and a fix to the state’s growing pension liabilities.

“There are two things we should be treating with the utmost caution, and it’s our general fund and our Constitution,” said Bradley Peterson with Greater Minnesota Cities. “Putting a constitutional amendment on the ballot for potentially $300 million per year is premature.”

School groups and other labor unions, including SEIU Healthcare Minnesota, testified that the bill would limit the pool of funds available for education and health programs across the state, which don’t currently have any dedicated funding streams.

Sen. Nick Frentz, DFL-North Mankato, said the constitutional amendment should add a line that says, “if this passes, the funds directed to transportation will be cut from other general fund uses,” he said. “That’s the truth of it, right? That’s what’s happening.”

Some Republican legislators are also wary of amending the constitution, especially after Republicans moved to put two amendments on the ballot in 2012. The amendments, one to ban gay marriage and the other to require photo identification to vote, both failed and Democrats swept into control of both chambers of the Legislature.

Newman’s bill passed out of the Senate Transportation Finance Committee on a close vote late Wednesday night, but on the House side of the Legislature, there’s still no companion bill to Newman’s proposal.

Putting a Constitutional amendment question on the ballot requires just a simple majority of support in both chambers — and does not need the governor’s signature. Republicans, who control the Senate by a single vote, could need DFL votes to pass the bill, however. For his part, Dayton doesn’t want legislators to pass the amendment, saying he’s worried it will blow a major hole in the state’s budget in years to come.

But Associated General Contractors’ Bryduck said the group is working with legislators who are uneasy about the cost to the general fund, including creating a phase in for the new funding over several years. “The reality is, we don’t know what will come up and what the demands will be on the general fund in the future, but we know that transportation has been neglected.”