It’s an ambitious plan: Convert the Twin Cities’ most popular bus routes to a newish-to-this-region form of transit. Eleven different routes have been identified as good candidates for arterial bus rapid transit — rubber-tire vehicles and enhanced stations with some of the features that make light rail so popular with riders.

St. Paul was the first to get such service with the A Line that started running in June of 2016. Its distinct buses pick up passengers along Snelling Avenue and Ford Parkway every 10 minutes between the Rosedale Mall and the 46th Avenue Blue Line station in Minneapolis.

Now comes BRT No. 2 — its construction, at least. A ceremonial groundbreaking Tuesday will kick off building of the C Line, which, once completed, will begin at the Brooklyn Center Transit Center and travel down Brooklyn Boulevard, Penn Avenue and Olson Memorial Highway before terminating at Hennepin Healthcare (formerly HCMC).

Service to begin in late spring of 2019

The route is now served by one of the most used Metro Transit bus routes, the 19. Construction will begin once the ground thaws and will progress through the fall. After a winter lull, work on stations will be completed during the spring, with service beginning sometime in late spring of 2019.

While the C Line is part of Metro Transit’s broader regionwide plans for high-capacity and more-rapid transit lines, it has a unique story. After planners and the Metropolitan Council arrived at the alignment for the Bottineau light rail project — Olson Memorial Highway and the BNSF right of way through Golden Valley rather than on Penn or West Broadway — North Minneapolis advocates pushed for equity enhancements in North Minneapolis.

Analysis has shown that investment in neighborhoods of color was below that of whiter neighborhoods and suburbs. Yet riders in North Minneapolis were some of the systems’ most plentiful.

‘This was a big lift’

“If we were in business, these would be our premium customers because they take the bus the most,” Cunningham said. “They are our most dependable riders.” Among them over the years were his grandmother, his mother, his neighbors.

“That was like seven years ago,” Cunningham said of the timeline for the process. “Think about that, from when we started on this journey of even contemplating the C Line to now, when the resources are there to finally do the line itself. 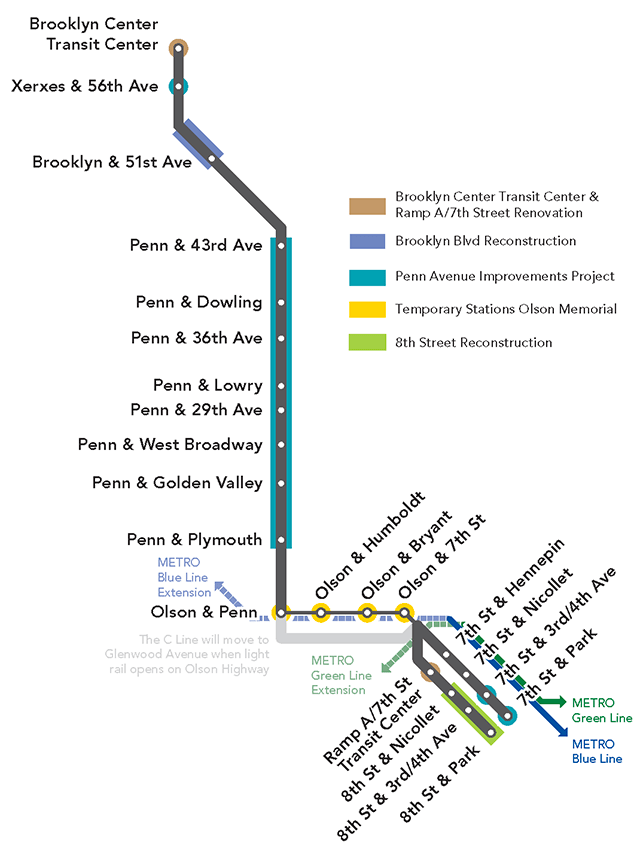 The C Line has a $37 million budget and includes the construction of stations and purchase of new buses, including eight electric buses, purchased with a federal grant. For riders familiar with the A Line, these buses will be different in other ways as well. Because ridership on the Route 19 bus is higher than what had been serving the A Line corridor, 60-foot articulated buses will be used in Minneapolis. That will not only bring more capacity but feature three doors instead of two to make loading faster.

BRT service attempts to provide a light-rail-like rider experience but with rubber tire vehicles instead of steel wheels on steel rails. Start with the stops. BRT stations are distinguishable from bus stops in both size and design. Most have heat and higher-levels of security. Display boards identify the route and the next bus arrival. The platform is nearly the same height as the bus entry, so boarding is step-free. Riders purchase tickets at the station and can use any door to speed boarding.

And the frequency is better for riders: every 10 minutes during busy times.

Katie Roth, Metro Transit’s arterial bus rapid transit manager, said Route 19 currently averages 7,000 daily riders. That is projected to increase to 9,300 by 2030 with the C Line. The Route 84 that the A Line supplements had 4,000 riders before the new service began. The daily rider count is now 5,600 daily, and projections are that it will reach 8,700 by 2030.

Roth said the agency estimates that travel times on the C Line will be 20-25 percent faster than on the current bus line. Faster boarding helps. BRT buses permit exiting and boarding from all doors because tickets are purchased at the station, similar to light rail ticketing. Also helping speed up travel times are the station bumpouts that not only create more space for station amenities but allow buses to remain in the traffic lane for boarding. That takes away the need to move back into travel lanes after stopping. 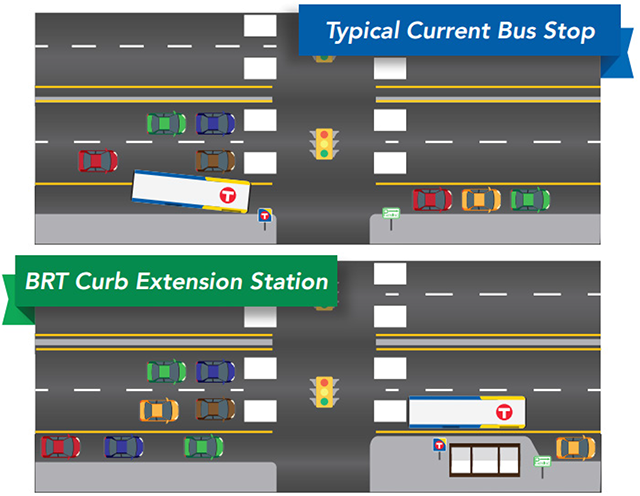 Metro Transit
Top image: Today, buses stop in the right-turn lane, with delays caused by merging back into traffic.

And the buses are equipped with automated signal priority systems that communicate with traffic light controls and might either keep a green light shining longer or get a red to change sooner than it might otherwise.

“On the A Line that’s a really important part to keeping us on schedule,” Roth said. “We’ve had upwards of 94 percent on-time performance in recent months on that corridor.”

And unlike regular bus service with stops every few blocks, stations are more widely spaced for BRT lines — up to a half-mile apart.

The C Line project will bring with it some construction challenges as it tries to dovetail with three other projects. The Met Council is partnering with Hennepin County and Minneapolis to rebuild Penn Avenue from Lowry to West Broadway [PDF] as well as make other lighting and pedestrian improvements along much of Penn. (A community meeting is set for Thursday to brief neighbors on that project beginning at 6:30 p.m. at 2001 Plymouth Avenue).

Metro Transit has identified 11 potential BRT corridors, mostly along the system’s most traveled bus corridors, but in alignments that are too narrow or too developed to accommodate light rail. Next up could be the D Line — a lengthy corridor now served by Route 5 that would run from Brooklyn Center through North Minneapolis into downtown Minneapolis and then continue to the Mall of America mostly along Chicago and Portland. 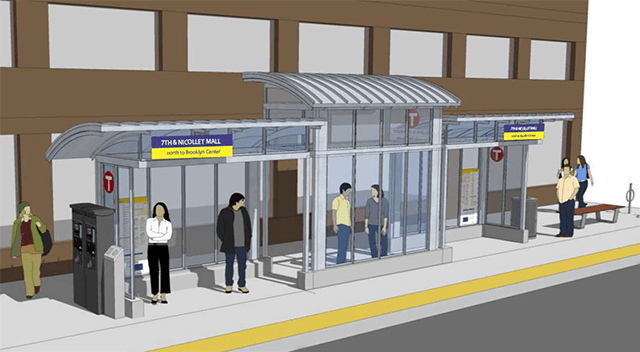 Metro Transit
A rendering of the proposed large shelters on the C-Line.

That project attracted some controversy at the end of 2017 when backers led by the city of Minneapolis protested what appeared to be a downgrading of the project. The Met Council pointed out that as it updates the Transportation Policy Plan, the line was not included in a list of projects with secured funding because it doesn’t yet have a funding plan. That could change soon if Gov. Mark Dayton’s construction bonding request of $50 million to expand transitways is approved.

After that, depending on funding, could come the B Line,  which would run on Lake Street in Minneapolis and Marshall Avenue in St. Paul, linking the Green Line at Snelling and University with a proposed Lake Street light rail station. The E Line would run on Hennepin Avenue along the Route 6 bus route.

There are also transitway projects in planning, including the Gold Line in the East Metro and the Orange Line between Minneapolis and Burnsville as well the Rush Line linking St. Paul and White Bear Lake and the Red Rock Corridor between Hastings and St. Paul.