On the face of it, lawmakers should have seemed happier.

Just three months ago, budget officials warned of a projected $188 million shortfall in Minnesota’s two-year budget, the first time in nearly five years the state was facing any kind of a deficit at all. On Wednesday, those same officials had much better news: The budget deficit had transformed into a $329 million surplus in the updated February budget forecast, a far rosier figure for lawmakers, who are now in the thick of the 2018 session.

DFL Gov. Mark Dayton and all four state legislative leaders expressed relief that the deficit had swung more than $500 million in the opposite direction, giving the state a surplus.

“We’ve had one of the largest turnarounds in a state revenue forecast in modern history,” Republican House Speaker Kurt Daudt said Wednesday, responding to the forecast.

But, they admitted, they all expected the number to be even higher — and they’re already trying to rein in expectations about what can be accomplished this session.

Even with a projected deficit last fall, Dayton and most legislative leaders have been anticipating some kind of budget surplus for months.

That’s in part because Congress passed a massive federal tax bill that President Donald Trump signed into law in December. The package has created a short-term stimulus and increased spending from consumers, state budget officials said. All told, the state has collected about $353 million more in revenues from “all major tax types” than they’d expected by this point, according to the forecast.

Another reason for the projected deficit last fall: Congress’ failure to reauthorize funding for the Children’s Health Insurance Program. In February, though, Congress voted to fund the program into the next decade, effectively wiping out the deficit figure the state was projecting to fund the program. “The federal government has helped us out some with these numbers,” Senate DFL Minority Leader Tom Bakk said.

Given all of those things, some lawmakers were predicting a surplus somewhere between $600 million and $1 billion for this session. “I actually believe this forecast to be somewhat pessimistic,” said Daudt. “I think it could be more optimistic based on the kind of growth that we are seeing. I wish that it was, but what great news that we’ve had this turnaround.”

This year’s legislative session is a short one, with a deal already in place to balance the state’s $46 billion, two-year budget. But even for the non-budget year, a large number of issues have cropped up that lawmakers need to deal with. The biggest one is the federal tax cut, which is creating a complicated mess for lawmakers and tax preparers.

The state must figure out a way to bring the state’s tax code in line with the federal code this year, a process known as tax conformity; either that or prepare Minnesota taxpayers for an extraordinarily complicated tax season next year. But given the way the federal bill changed the definitions of taxable income and eliminated certain exemptions, simply conforming the state’s code could mean a big tax increase for many Minnesotans. Revenue officials are projecting the state will collect $464 million more in taxes from Minnesotans for the current two-year budgeting period if the state completely conforms to the federal law and about $1.168 billion over the next two-year biennium.

Lawmakers are trying to figure out a way to make taxes for Minnesotans less complicated while limiting some of the increases incurred under the federal law. A larger surplus would have made that job easier this session. “More is always better, of course,” Republican Senate Taxes Chairman Roger Chamberlain said. “We are going to work with the numbers we have.” 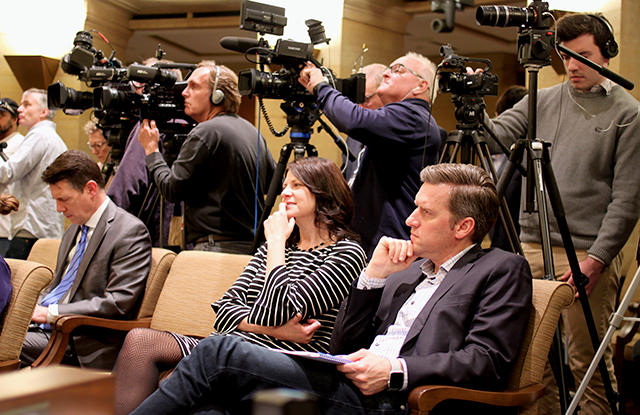 But there are also other things lawmakers in both parties would like to spend money on this session, including a proposal to increase funding for school safety initiatives and a package of construction projects around the state, known as the bonding bill. Lawmakers are also dealing with the state’s problem-plagued licensing and registration system, which could need up to $43 million in emergency funding to get back on track. There’s also a desire to shore up the state’s obligations to its pension plan holders. A pension bill currently under consideration will cost $30 million this year and even more in the next state budget.

But the $329 million figure is already tempering those expectations, particularly since lawmakers are working under such a short timeline. The Legislature is constitutionally required to adjourn by May 21, and with a busy election year ahead, most don’t want to head into an overtime special session.

“I think the fact that now we clearly have very little revenue will probably take a little bit of excitement out of people coming here looking for additional funding,” Bakk said.

The state’s next budget forecast was also on the mind of many lawmakers Wednesday, especially because footnotes in the forecast predict a slowdown in the state’s economy.

Laura Kalambokidis, Minnesota’s state economist, said the economic recovery has been driven by consumers, and they are spending more than most anticipated at this point. But she doesn’t expect that to last forever; spending increases will eventually slow, as more people start to save money. The nation is also in the midst of the longest single economic expansion in history, and budget officials warned that it cannot last forever.

Dayton was light on details about his plans for the surplus or for how he thinks the state should approach conforming to the federal tax changes. He plans to release his supplemental budget bill on March 15, one day after his State of the State address to lawmakers.

It’s Dayton’s final year in office, and while he still has unfinished priorities — clean water initiatives, education funding and a proposed $1.5 billion bonding bill — his biggest concern is leaving the next governor with a fiscally sound state budget, he said. When Dayton came into office eight years ago, the state faced a $6.2 billion budget deficit.

“Like the Legislature, I will have to compress what I would like to do into what I believe we can do, given these limiting fiscal realities,” he said. “Not setting the state up for another fiscal cliff down the road has to be everybody’s priority.”