That the 8th Annual Minnesota Congressional Delegation Hotdish-Off — by now, a Washington institution and a fixture on the social calendar for Minnesotans in the capital — even happened at all this year was no sure thing.

The idea to bring the 10 members of Minnesota’s congressional delegation together each year for a good-natured competition in celebration of the state’s most enduring starchy staple began in 2011 thanks to then-Sen. Al Franken.

But Franken stepped down in January over allegations of sexual misconduct. Tina Smith, the lieutenant governor of Minnesota, was selected by Gov. Mark Dayton to fill his seat. A longtime presence in DFL politics, Smith has sought to chart her own course during her four months in Washington.

But to the relief of D.C.’s Minnesotans — along with hotdish and Hotdish-Off fans everywhere — Smith preserved the tradition her predecessor started, announcing in April that she would be picking up the cherished Pyrex mantle of Hotdish and convening the competition for its eighth straight year.

Count me among the relieved: I’ve covered the Hotdish-Off for the past two years for MinnPost, and I’ve found it to be a delightfully quirky and unique tradition. Most of the time, Minnesota’s politicos really do set aside their politics to talk shop and ‘Sota over hotdishes — which, notably, have grown increasingly inventive in recent years.

But this year, parsing the politics of the competition was not my charge: I was asked by Smith’s staff to emcee the event and, if such a result were to occur, break a tie to determine the winner of the competition.

That meant, for the first time ever, I’d have to try every hotdish on the table. In the name of competition, journalism, and Minnesota, I attacked that task with gusto. I’ve found over the past few years that readers often love the Hotdish-Off as much, if not more, than I do. Having survived sampling 10 cheesy, starchy, meaty hotdishes, I’m humbly offering up my takes on each of this year’s entries, plus photos and recipes, to bring the contest home for you.

Oh — and I did break that tie, thus handing the 8th Hotdish-Off title to 6th District Rep. Tom Emmer, the first Republican to win the prize outright on the strength of his bold, breakfast-themed entry. In second was 8th District Rep. Rick Nolan’s traditional Tater Tot Hotdish, and in third was 4th District Rep. Betty McCollum’s even-more-traditional SPAM Good Hotdish.

You can see all the recipes for this year’s Hotdish-Off entries here. 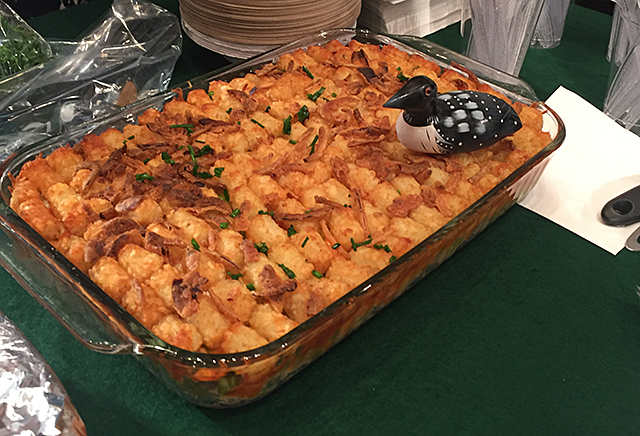 This is a final entry for Nolan, the 8th District Democrat who will be retiring from Congress at the end of this year. And it was a crowd-pleaser, especially among some of the judges: Phill Drobnick, coach of the gold medal-winning U.S. Men’s Curling Team and an Eveleth native, felt it was clearly the strongest entry.

Ultimately, I picked Emmer’s dish over Nolan’s, and it wasn’t a close call. In a Hotdish-Off era that prizes sometimes-wild ingredients and unorthodox pairings, Nolan’s was a paean to tot traditionalism: The crispy taters rested on a bed of ground beef, cheese, and mixed carrots and peas — evocative of the best, not worst, of school lunch.

I liked Nolan’s dish, but in a strong field, there were just better options. In a defiant runner-up speech — which I think is a Hotdish-Off first — Nolan asked the crowd: “Was that not an authentic Minnesota hotdish? You just can’t beat cheese, potatoes, a little bit of hamburger, and some of that good, old-fashioned tater tots. That be the secret, guys.” 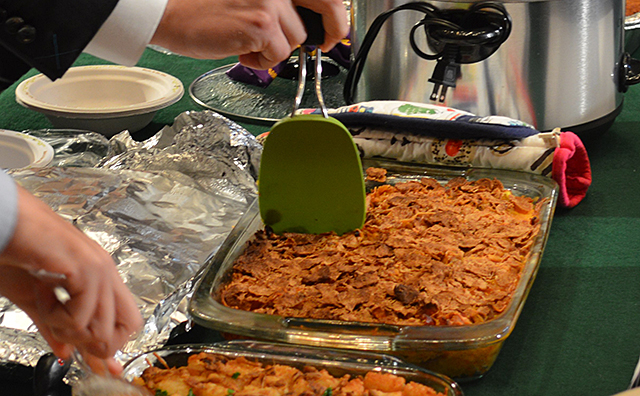 Courtesy of the Office of Rep. Tom Emmer

Turns out, though, you can beat cheese, potatoes, burger, and tots, and Emmer’s Hotdish of Champions did. If you’re breakfast-biased like me, this is a real winner: This was the closest thing to a hearty breakfast at the Hotdish-Off, and surely the eggiest, cheesiest dish I’ve encountered at this competition.

Emmer’s winner mixed tots, cream of mushroom soup, eggs, bacon, and sausage, all topped with crisped cereal — General Mills mix, to be clear. Like a good hotdish, this tasted great. But like a great hotdish, it was more than the sum of its parts — this was a hotdish with vision.

Alas, the 6th District Republican left before he could collect his Pyrex trophy — Rep. Jason Lewis did in his stead — but he earned it. 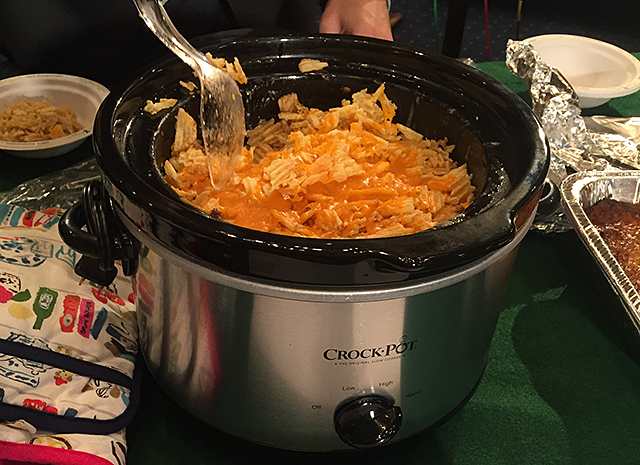 The Minneapolis Democrat’s past dishes have been visually splashy — see his “Solidarity Kugel” from last year, and the world-famous Prince hotdish from 2016 — but have failed to curry favor with the judging panel.

Ellison’s entry this year, however, was a personal best. Based in beef, cheddar cheese, and tots — the upper crust was made up of crushed Ruffles potato chips — this hotdish was unafraid to be tater-forward, offering a satisfying initial crunch backed up by a rich, beefy stew. That refreshing crispiness faded, however, with each bite, as the chips grew soggy under the weight of thick sauce. More than one judge told me that was a dealbreaker for this creative hotdish, and I’d have to agree. 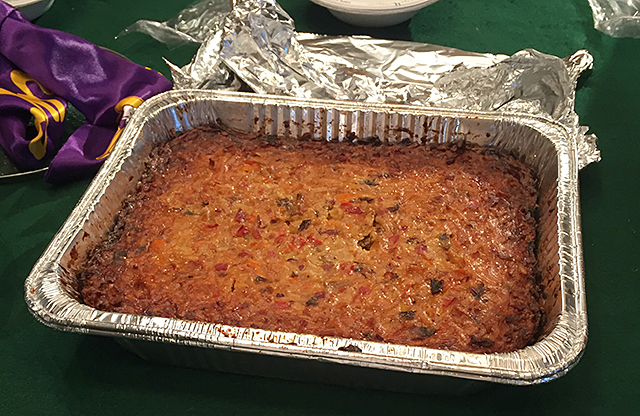 Paulsen offered the second breakfast-themed hotdish of the day, but this entry didn’t hold a candle to Emmer’s: Though it included egg, hash browns, sausage, cheese, mushrooms, and peppers, the ingredients didn’t play well together, creating a kind of meh, bland breakfast loaf. 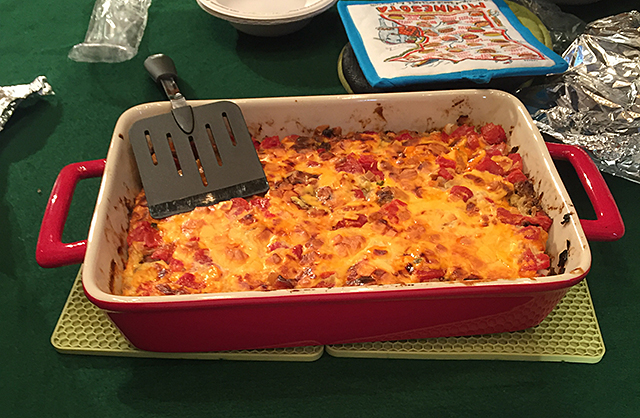 Surprise, noted an attendee, is not always what you want in a hotdish. But Smith’s first entry into the Hotdish-Off, I found, was a pleasant surprise: It was, in the best way, what a cheeseburger would look and taste like in hotdish form.

It was meaty, cheesy, and one of the few entries to eschew the dominant tater tot. Instead, the starch base was made of potato hamburger buns. It was a nice touch, and the “secret sauce” — seven combined tablespoons of ketchup and mayo, per Smith’s recipe — made this dish evocative of a fresh burger at a summer cookout. For me, this was a top-three hotdish, and the newest member of the Minnesota delegation should be proud. 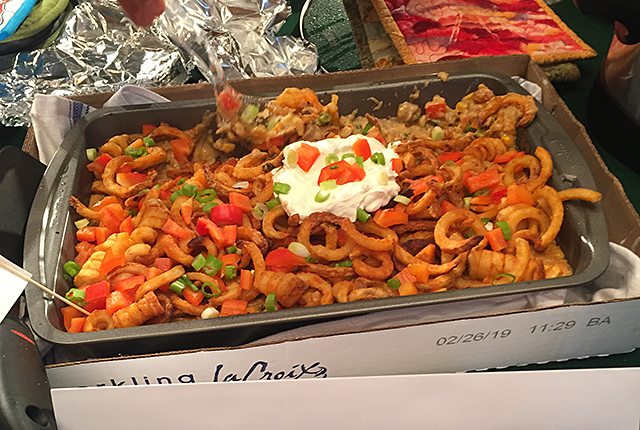 Minnesota’s senior senator, the first winner of the Hotdish-Off, has failed to recreate that winning magic since 2011. 2018 wasn’t Klobuchar’s year either — this hotdish, while solid, didn’t work for me as well as other entries. The sirloin steak was a little much, and the dish felt heavy. (Relatively speaking. I know this is a Hotdish-Off.)

But Klobuchar had some fun with Drobnick, the curling maestro, and his presence on the judging panel, leaning hard on curling wordplay. To her credit, that led to the first time I’ve seen curly fries on top of a hotdish. Points for finding a tot substitute — especially one as tasty as crisp, bright-orange curly fries. 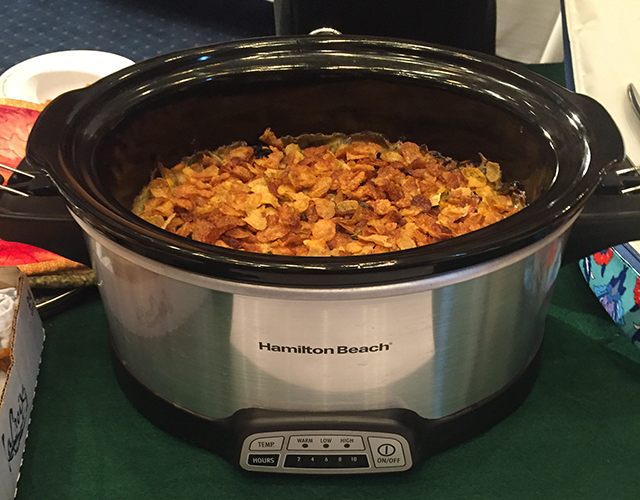 A bit of election-year telegraphing here from Peterson, of western Minnesota’s 7th District. The 14-term “Blue Dog” Democrat is widely known as the most conservative member of the House Democratic conference, and often votes with Republicans on a lot of key issues.

But Peterson’s hotdish title is working overtime: There is, indeed, some buck in this dish — venison, in fact, is the meat base, accompanied by pork breakfast sausage, potato patties, green beans, and cheeses from cheddar to gorgonzola.

This was a strong follow-up to Peterson’s winning hotdish last year, dubbed the “Right to Bear Arms,” which, uh, also worked on several levels. If I were a judge, Peterson would have been a repeat winner: These flavors were subtle and savory, working together in concert. The venison was stellar, and the green beans were a welcome touch of green in a sea of starch and meat. In substance and spirit, this one embodied what hotdish is all about. 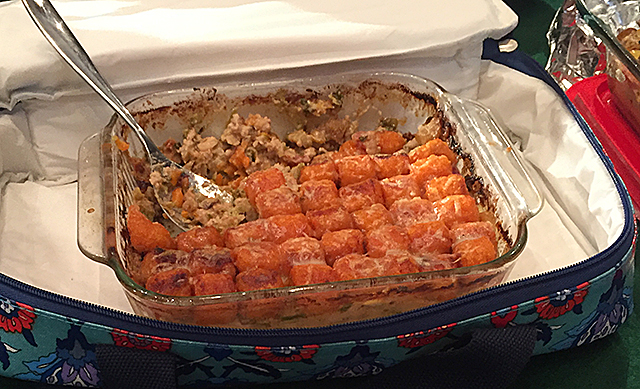 This was also the final Hotdish-Off for Walz, who has assembled for himself a bona fide Hotdish Dynasty: the 1st District Democrat, who is leaving Congress to run for governor, is a three-time winner of the competition.

And Walz entered the room with confidence, trailed by aides brandishing his three Hotdish trophies. This year’s, too, was a confident Hotdish: It was topped with sweet potato tots, putting a simple spin on a classic, if overused, hotdish staple.

Major points on creativity: Walz’s 1st District is an agricultural breadbasket, and it stands to be significantly hurt by any trade war with China. Ingredients in this entry included pork, sweet potatoes, Minnesota apples, cheddar cheese — all of which could potentially be penalized with foreign tariffs. If you’re gonna politicize hotdish, this is how to do it. 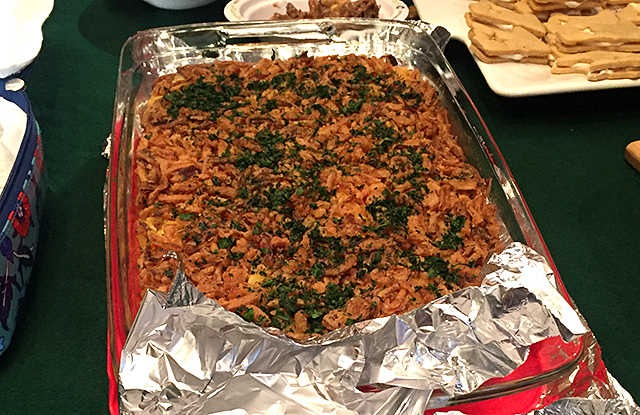 McCollum is an avowed hotdish traditionalist, and prefers the stuff of her childhood — notably, a noodle base — over the current tater tot trend. The 4th District Democrat told me tots were too expensive when they first came out, only becoming popular recently.

Her entry this year is a tribute to the humble, no-frills roots of this culinary creation: egg noodles, cream of mushroom, and that Minnesota staple, SPAM. Not a standout for me, but it was important to have an entry steeped in hotdish history and, clearly, that won over the judging panel, putting her in 3rd place. 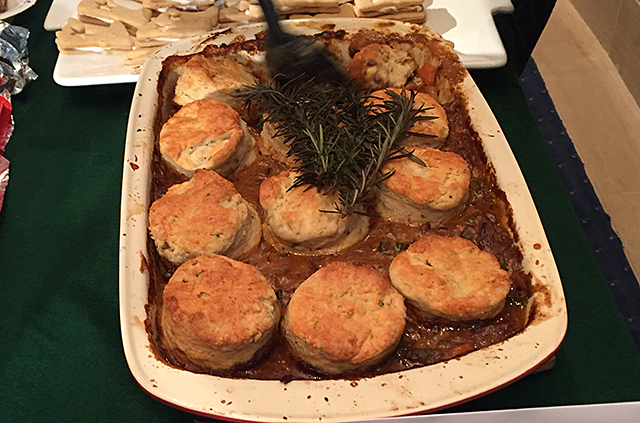 As he did last year, Lewis, the freshman Republican of the 2nd District, used his hotdish to celebrate Minnesota’s beleaguered sports teams. And it was certainly game on for this year’s entry: The meats were rabbit, wild boar, venison and bison, presented in a rich, Surly Darkness-based sauce.

Topped with biscuits — a nice and inventive touch — this was a good cold-weather hotdish with strong flavors, evoking a rich, flavorful beef stew. Good, but not enough to push Lewis into my top three.

For another year, Minnesota’s congressional delegation came together over hotdish. I tried them all.