That changed February 14, when 17 students were shot and killed at Marjory Stoneman Douglas High School in Parkland, Florida. Now, Lewis is an activist, leading her fellow students on marches out of the classroom and meeting with her local congressman to talk about gun issues.

Frustrated with lack of progress on the issue, the high school sophomore is also now a campaign organizer, working to vote out lawmakers this fall who don’t support changing the state and nation’s gun laws — a group that includes her congressman, Republican U.S. Rep. Erik Paulsen.

“Adults, we took to the streets, now it’s your turn to take to the polls,” Lewis told a group of more than 300 people gathered in a Brooklyn Park high school auditorium on Saturday.

The event was a part of Town Hall For Our Lives, a series of meetings held in cities across Minnesota and the nation on Saturday where students aimed to take their frustrations on the gun control debate and use it to increase turnout at the polls this fall.

The size and sustained momentum of the movement in the wake of the Parkland shooting has surprised some political pundits, but many are wondering if the sense of urgency can continue for another eight months, when Minnesota will have an open governor’s race on the ballot, all eight congressional seats, two U.S. Senate seats and more.

“I think that’s the million dollar question,” said University of Minnesota Political Science Professor Andrew Karch. “Historically there has been overwhelming support for a lot of these actions but these supporters tend not to vote on the gun issue.”

“I think that the attention that the Parkland survivors have been able to maintain has been unusual from the perspective of previous events, which seemed to have a moment of salience but not much of a lingering impact,” Karch added. “It seems like the high school students in particular are very savvy and seem to be quite skilled at organizing events that keep the issue front and center.”

For years, lawmaker’s decisions on guns were often influenced by an assumed apathy, at least on one side of the issue. While there was often a majority of voters who supported gun-control measures, people didn’t necessarily get out and vote on them. That was countered by a smaller but much more politically active group of gun owners who came out consistently to vote on the issue of preserving gun rights.

Rob Doar, the political director of the Minnesota Gun Owners Political Action Committee, said supporters of gun control measures spent at least $900,000 in the 2016 election compared to $60,000 from his group and the National Rifle Association. He expects that number will only increase this fall. “Even with that much spent, they only flipped two seats,” Doar said. “We expect that we will continue to have success engaging Minnesota’s law abiding gun owners at the polls in 2018.” 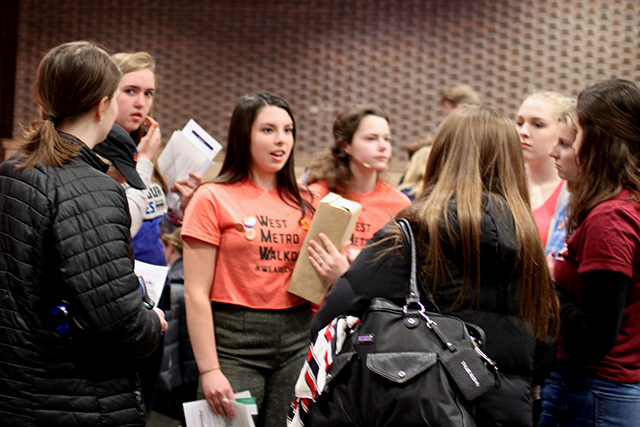 MinnPost photo by Briana Bierschbach
The students, and members of the local chapter of Indivisible, were cognizant of the hurdles on Saturday as the met at the town hall.

Past movements to change gun laws haven’t led to big changes. In 2000, activists organized the Million Mom March in Washington, D.C. and in 70 other locations across the country after a shooting in a Jewish Community Center in Granada Hills, California. But that didn’t necessarily translate to more activity at the polls that year — or in the cycles that followed.

The youthfulness of the Parkland movement has also lead some to dismiss how much of an impact they can have on the ballot in the fall. Many the most motivated activists not yet old enough to vote, even if they’ve come of age during one of the most politically divided moments in the nation’s history, in the wake of the election of President Donald Trump. Still, in past elections, the youth vote has been consistently low compared to older voters, who tend to hold more conservative views on gun ownership.

“I think for a long time young people were seen as this slumbering giant,” said Ian Feagler, a student at Hopkins High School who spoke at the town hall. “But now we’re waking up.”

‘Thoughts and prayers don’t save lives’

The students, and members of the local chapter of Indivisible, a Trump resistance group that cropped up in chapters across the country, were cognizant of the hurdles on Saturday as the met at the town hall.

The groups coordinated to put on the town hall, and there were booths set up to register voters for the upcoming midterm election in Minnesota. Candidates for office were on hand to answer questions about gun control legislation. Groups like Moms Demand Action said they were flexing their political muscles and making endorsements for candidates in some of the major races in Minnesota. Paulsen was invited to the event but had a scheduling conflict, organizers said, so they propped up a cardboard cutout of him where attendees stuck Post-it notes with comments for him.

“It seems like there is a stronger attempt to create an infrastructure that is more lasting,” said Karch. “The goal, of course, is to make it so that these events are not one time affairs.”

Richard Carlbom, who is working with Democrat Dean Phillips’ campaign against Paulsen in the 3rd District, said their campaign went from 25-30 student volunteers to nearly 100 after the Parkland shooting, calling themselves the #DeansList. Both Phillips and another DFL candidate, Adam Jennings, were on hand to answer questions from the audience about the issue.

“That cardboard cutout of Erik Paulsen is the closest I’ve come to seeing the man,” Phillips said. “Thoughts and prayers don’t save lives; actions save lives.” 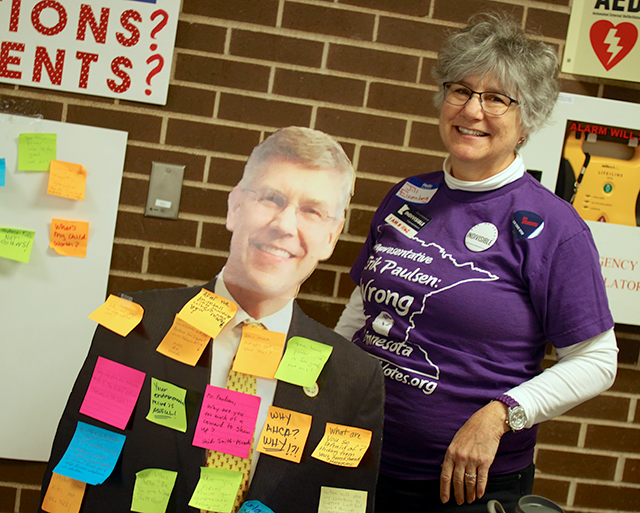 MinnPost photo by Briana Bierschbach
CD3 candidate Dean Phillips: “That cardboard cutout of Erik Paulsen is the closest I’ve come to seeing the man. Thoughts and prayers don’t save lives; actions save lives.”

Lewis knows that turning protest energy into success at the polls isn’t going to be easy, but she pushed back on the notion that teenagers like herself can’t make a lasting impact on the system. Many of the young activists coming out of the Parkland shooting will be eligible to vote this year, or in the 2020 presidential race.

“Anyone who tries to silence or disregard our action because we are teenagers, look at this history books,” Lewis said. “Every movement has started with young people. Look in the history book again in 15 years, and you will see us, we are the upcoming voters.”