For over 10 hours, Democrats met in a basement ballroom of a downtown Duluth hotel working to endorse a candidate to carry the party banner in Minnesota’s 8th Congressional District, an open-seat race that both parties consider a must-win in November.

Ultimately, DFL delegates couldn’t reach a consensus: none of the five candidates in the running reached the required 60 percent threshold of support needed to clinch the party’s official endorsement.

Now, it’ll take an August primary to determine which of these Democrats earns the chance to compete in the general election — and that primary has the potential to showcase the party’s rifts on issues like mining and immigration, which were on full display at Saturday’s convention.

According to the convention rules, if no candidate reached 60 percent by the 10th ballot, delegates could vote to not endorse anyone. By 7:30, the majority of the 170 delegates in attendance had voted not to endorse after a lengthy stalemate between two candidates with the most support, Leah Phifer and Joe Radinovich.

Phifer, a college professor who previously worked at the Federal Bureau of Investigation and federal Immigration and Customs Enforcement, initially entered the race to challenge incumbent DFL Rep. Rick Nolan.

When Nolan announced his retirement in February, Phifer had the advantage of a five-month head start over the four candidates who jumped into the race afterward. It showed on Saturday: her blue-shirted supporters were a vocal presence in the convention hall, and she got the most votes of any candidate on each of the 10 ballots.

But Phifer’s background as an ICE employee revealed a deep rift on immigration: members of the Latino DFL Caucus protested her candidacy and urged delegates to reject her in a speech from the floor, one of the convention’s most dramatic moments.

The first ballot, sent out just before noon, saw Phifer take the plurality of delegates, with just over 44 percent. Radinovich was behind her with 26.5 percent, and state Rep. Jason Metsa, of Virginia, took 20 percent.

Two candidates — Kirsten Kennedy and Michelle Lee — failed to even break five percent on the first ballot, which dropped them from the next ballot. Kennedy, the mayor of North Branch, thanked her supporters in a brief address, while Lee, formerly a veteran TV news anchor in Duluth, said in a defiant speech that she would not abide by the party’s endorsement and would move to a primary, prompting boos and jeers from the crowd.

Later in the afternoon, Radinovich — a former state representative from Crow Wing County who left his job as chief of staff to Minneapolis Mayor Jacob Frey to run for this seat — got what his campaign hoped would be a boost: an official endorsement from Nolan, who was not in attendance but weighed in on the race from afar. (Radinovich managed Nolan’s successful 2016 re-election.) 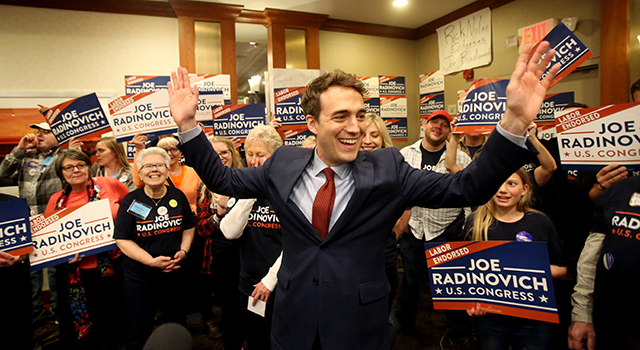 MinnPost photo by Paul M. Walsh
Later in the afternoon, Joe Radinovich — a former state representative from Crow Wing County who left his job as chief of staff to Minneapolis Mayor Jacob Frey to run for this seat — got what his campaign hoped would be a boost: an official endorsement from Rep. Rick Nolan.

Frey, who traveled to Duluth to work the floor for Radinovich, got on top of a chair with a hand-written sign broadcasting Nolan’s endorsement to the delegates. But ultimately, Nolan’s support was not enough for Radinovich to eclipse Phifer.

Looming large over the convention was a candidate who wasn’t even in the room: Republican Pete Stauber, who is a lock to earn the CD8 Republican Party endorsement. Democrats are concerned that a bitter and drawn-out primary will give Stauber time to raise money and consolidate support, boosting his campaign to win this seat in November.

National Republicans like Stauber, a St. Louis County commissioner who formerly served with the Duluth Police Department, and they view CD8 as one of their best pick-up opportunities in the entire country. President Donald Trump won here by 15 points in 2016, and Republican candidates are making inroads in places like the Iron Range, which has been a DFL stronghold for the better part of the century. Nolan’s retirement, in the eyes of the GOP, only increased their chances of flipping CD8.

“If we let this division continue,” one delegate said on the floor before the decision to not endorse, “Pete Stauber is going to take this seat from us.”

Addressing delegates earlier in the afternoon, Minnesota DFL Chairman Ken Martin urged delegates to unite behind a candidate. “If we come out of here divided, we’re not going to win,” he said.

Nevertheless, CD8 Democrats cast their inability to endorse as a symptom of the party’s strength, not weakness, and most remained confident the DFL can hold this seat even after a tough primary.

State Rep. Mike Sundin said a primary is “not a doom and gloom thing by any means… There’ll be a robust contest with a strong finisher, ready for the ultimate contest with Pete Stauber. This might be our opportunity to engage more people and keep them engaged through the whole process.”

Other delegates were uneasy at the prospect of a protracted DFL battle while Stauber glides toward the fall election. Jacob Littler, a DFL delegate from Virginia, said all five DFL candidates have a chance to compete in the primary. “A lot of it is going to come down to money,” he said.

“Unfortunately, that’s going to have to be a part of the decision for DFL primary voters. Who can raise three to four million dollars in the race against Pete Stauber? It sucks, but that’s the system we built.”

“The one thing,” he added, “is if we can keep it from becoming too negative.”