Minneapolis has instituted yet another update to its police body camera use policies, with officials saying the new rules are more specific as to when cameras are to be turned on — and more punitive when officers fail to follow the rules.

At a press conference Wednesday in North Minneapolis, Mayor Jacob Frey and Police Chief Medaria Arradondo released the updated rules and expressed confidence they would make a difference. The policy, Frey said, “is designed to maximize the times it is turned on when it is needed most.”

Cameras, for example, must be turned on when officers are two blocks from the scene they are dispatched to or immediately if that scene is less than two blocks away. Those who fail to follow policies will face suspensions of one day to one week and could be fired for aggravating circumstances.

Officers will face discipline not just for failure to activate cameras but for failing to properly document footage and for not informing supervisors when cameras aren’t working.

The latest changes result primarily from two recent embarrassments for the city: the lack of camera footage when Officer Mohamed Noor fatally shot Justine Damond in Southwest Minneapolis last summer; and a subsequent city audit in September 2017 that found that many officers were not following department protocols with regard to the cameras, including failing to turn them and failing to properly categorize footage.

Latest rules would not have changed anything in Damond case

While the new rules are much more specific as to when to activate cameras and how to store data, they would not have changed the camera circumstances surrounding the Damond shooting. Then, as now, cameras could be deactivated by officers once “an event has otherwise concluded.” Noor and Officer Matthew Harrity had completed their alley search for evidence of a possible assault that Damond had reported to police. As such, they had ended the call and likely would not have been required — even under the new rules — to have cameras still collecting audio and video.

Both the old and new rules require that cameras be activated for any “use of force situation” and say that if the camera is not activated prior to use of force “it shall be activated as soon as it is safe to do so.” Both Noor and Harrity activated their cameras once they got out of the their squad car after Noor had shot Damond.

Chief Medaria Arradondo, who was appointed interim chief just days after Damond was killed, would not respond directly to questions about whether Noor’s and Harrity’s cameras would have been required to be on had these rules been in place last July.

“There is still a criminal case in progress with that,” Arradondo said. “I want to focus on what we can do moving forward to enhance the service needs to our community and to enhance the capability to deliver the best rules for our officers.”

When asked if the new rules would have required Noor and Harrity to have their cameras on, Frey said they require activation two blocks from a scene and therefore said the rules were clear. When Frey was asked to comment on the language that would have permitted deactivation once a call had ended, police spokesman John Elder intervened and said it would be inappropriate for the city to answer that question.

Frey Wednesday made his pitch for the rules as way to be as specific and detailed as possible. “Public safety, by its very nature, is imprecise,” he said. “The calls our law enforcement officials answer are hardly ever clear cut. Officers are tasked with entering situations rife with ambiguity. That’s the job. But when it comes to our body worn cameras, that can’t be the way we do policy.

“We need to be as precise as possible in delineating expectations for our officers, their supervisors and yes for the entire city that depends on them to keep us safe.” Frey said. “Done right, cameras are a critical element in effectively delivering justice and enhancing transparency.”

Among other items, each officer will be required to keep cameras charged and to test them before going out on their shifts. If they find that cameras are not working while on a call, they must tell supervisors immediately and that supervisor can decide whether to withdraw the officer from the call. 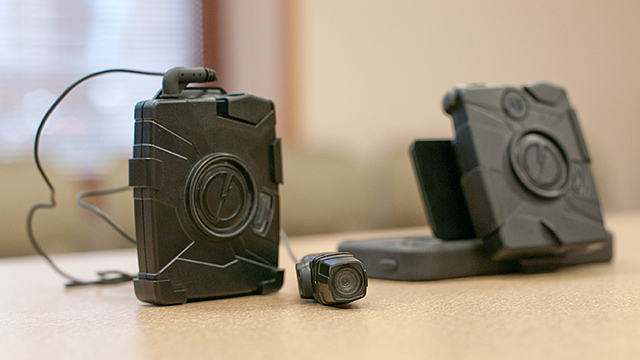 MinnPost file photo by Bill Kelley
Cameras must be turned on when officers are two blocks from the scene they are dispatched to or immediately if that scene is less than two blocks away.

Desk officers who deal with walk-in visits from the public must record those encounters. And officers are responsible for making sure video data is properly downloaded, properly coded and that case numbers are accurately included.

Failure to follow the rules will result in progressive discipline, starting with suspensions and leading to termination for the most serious violations: failure to activate cameras or deactivating them prematurely when involved in use-of-force situations and during pursuits “involving injuries or significant property damage.”

“Any body camera policy worth its salt must have consequences,” Frey said. “This one does.”

No officers have been disciplined under the previous policies. Imani Jaafar, the director of the Office of Police Conduct Review, said most cases involving failure to activate cameras have resulted in officers being sent through a process the department calls coaching, which she said is an effective tool.

“Before officers had a lot more discretion about when to turn on the cameras,” Jaafar said. “This both narrows the discretion and makes the disciplinary consequences clear. Now, when a case comes forward about body camera activation, it will go straight to the highest level of investigation which is caled administrative investigation because of the level of severity. There’s definitely a shift here in how the cases can be handled.”

This time is different?

These are the second set of new rules since Damond was killed. Last July, Arradondo and then-Mayor Betsy Hodges announced new rules that required officers to activate cameras when they begin to travel to a call for service or a traffic stop and as soon as possible when “self-initiating” public contacts.

In announcing those changes, Arradondo said: “What good is a camera if it is not being used when it may be needed the most. From this day forward in the Minneapolis Police Department, we want to add strength to our expectations.”

At the time of the September audit, police leadership claimed the updated rules of engagement had not been in place for very long and their impact may not have been captured in the audit. Though the audit did reveal that more hours of video were captured after the rule change, officers were still not routinely filming their activities. And many were not keeping records, as required, as to their reasons for not activating cameras.

In the wake of that report, the city council ordered quarterly reports on camera use. But the department said such a report would be too time consuming and has instead offered to sample a small percentage of officers.

Frey was asked why this set of rules should be viewed differently from previous promises made by city leaders that officers would be held accountable. Critics of the initial rules had argued for more stringent requirements regarding when officers were allowed to turn off their cameras. But it was only after Damond was killed that the city reduce officers’ discretion, though officials claimed the rule changes were in the works before the death.

“They may have been different personal but they are different words,” Frey said. “This is a different policy. It has been extensively amended. We’ve been exceedingly transparent. You have the discipline matrix. We have a policy now. The proof is in the pudding at the end of the day.”

One significant change came not as much with the words in the policy but in the process used to write them. Ryan Patrick, the legal analyst for the city Office of Police Conduct Review, said the new update involved civilian oversight officials early and often.

“This time was very different,” Patrick said. “We were included right from the get go.” That included being provided with a draft of the new policy and being able to go through it line by line. Suggestions, he said, were taken seriously with much of it implemented in the final policy.

Also appearing at the press conference was Justin Terrell, executive director of the Council for Minnesotans of African Heritage, who praise the efforts of both Minneapolis and St. Paul on police accountability. But Terrell said they should be viewed as one tool toward the more-important work of providing economic and educational opportunities to people of color.

“Ironically, it is not cameras or guns or use of force policies,” he said. “It’s the stuff that we do in our communities.”