Gov. Mark Dayton often resorts to a football metaphor to explain how he thinks negotiations with the Republican-controlled Legislature ought to work.

They way he describes it, he starts in his end zone; they start in their end zone. Once each side has moved some and they are both approaching the 50 yard line, a deal can be done. “I recognize they need to get some of what they want. … I have my priorities, and they have theirs,” the DFL governor said after vetoing a GOP tax conformity bill at an elaborately staged event last week at St. Paul grade school library, where a few dozen second- and third-graders looking on and shouting “Veto” as he applied the red stamp.

“We’re co-equal branches of government, and we need to both acknowledge each other’s priorities,” he said.

But it’s not clear the governor and Republican leaders at the Capitol are even playing on the same field these days. When the Legislature adjourned just before midnight Sunday — their deadline for passing bills this year — lawmakers were left hoping Dayton wouldn’t follow through on his threat to veto a massive omnibus bill as well as an attempt to bring state tax law into conformity with the new federal tax code, a disconnect that may be traced not so much to differences of political philosophy but disagreements over what constitutes compromise; what “halfway” looks like — or even it it exists at all anymore.

‘They say that’s a compromise?’

After Dayton issued his veto on the tax conformity bill last week, he complained about what he saw as a lack of good faith on the part of Republicans when it came to address his problems with the measure.

“They took two things out and they say that’s compromise?” he said. “They didn’t talk to me about it. There’s a lot more in that bill I find objectionable. Some of it I’ll swallow for the sake of reasonable compromise, but it’s not compromise when they do their own thing behind closed doors.”

By Saturday evening, it was Republican legislative leaders’ turn to contemplate the meaning of compromise, saying they found little give-and-take in what Dayton had termed his “global compromise” on spending and taxes.

Speaker of the House Kurt Daudt noted that of the list of 116 objections to the omnibus supplemental budget bill that Dayton had provided them, Republicans had accommodated the governor on 71 of them. “Sometimes around here we think if we can get to the 50 yard line, that sounds great,” Daudt said. “We’re beyond the 50 yard line, we went beyond the 60, you know, we’re beyond 60 yards closer to the governor.”

So, facing the threat of vetoes, Republicans went ahead and passed bills anyway. Their massive supplemental budget bill (it came in at almost 1,000 pages) was passed by the Senate and House as Saturday night bled into Sunday morning.

Nicknamed the Mega-Omnibus, it contains about $150 million in new spending (the two-year budget is $46 billion)  and is mostly a collection of disconnected policy bills that are bundled to gather votes and make the bill harder to veto. Included is what the Legislature could come up with on opioids; elder care; school safety; fixes to the troubled MNLARS computer systems; and authority to spend federal money on election security.

Given that Dayton had vetoed a bunch of bills that were sent as separate legislation, putting a bunch of stuff in individual bills couldn’t hurt, Republicans figured. “Maybe there’s one or two things here or there that one of us doesn’t like but there’s 10 or 20 things here that all of us like,” Gazelka said. “But compromise means we get some of what we like too.”

Senate Minority Leader Tom Bakk, DFL-Cook, said the Dayton threat is real, and that the Senate could salvage the session by taking it back to negotiating committee and finding a way to make it into something the governor would sign. “To send it to a certain veto wastes everyone’s time,” Bakk said. “I don’t know why we would do that.”

The same disconnect between the parties — on what constitutes a compromise and what give-and-take looks like — played out again Sunday when the House debated a new bill combining school funding and tax conformity.

House Minority Leader Melissa Hortman, DFL-Brooklyn Park, described the GOP approach toward the governor like this: “We’re going to shove it at you and we’re going to see how much you’re willing to take. … If this session ends in a heap of nothing, it will be because this Republican majority didn’t learn the lesson that you have to listen to the governor if you want bills to become laws.”

But House Majority Leader Joyce Peppin, R-Rogers, said the GOP gave a lot after listening to Dayton. “A lot of things he wanted to get rid of were priorities for Republicans,” Peppin said. “But it’s not fair that we would throw away all of the concerns that the House and Senate have identified as priorities.”

House tax chairman Greg Davids, R-Preston, listed a series of items Dayton objected to  — including the tax-cut triggers, the estate tax and restrictions on expansion of MNsure — before saying: “What did Uncle Greg do? He listened and pulled them out.”

Early Sunday evening, House GOP leaders once again said they hoped Dayton would sign the bills, even though Gazelka complained that Dayton had — wait for it — “moved the goalposts” when he came up with his demand for more school money.

Though he said his contacts with Dayton senior staff “had gone dark” Sunday afternoon, he said leaders were still trying to make the supplemental budget bill even less objectionable by removing two more troubling sections. “In the end, I think the governor will sign that bill.” Daudt said of the omnibus. “I’m also hopeful on the tax bill.” 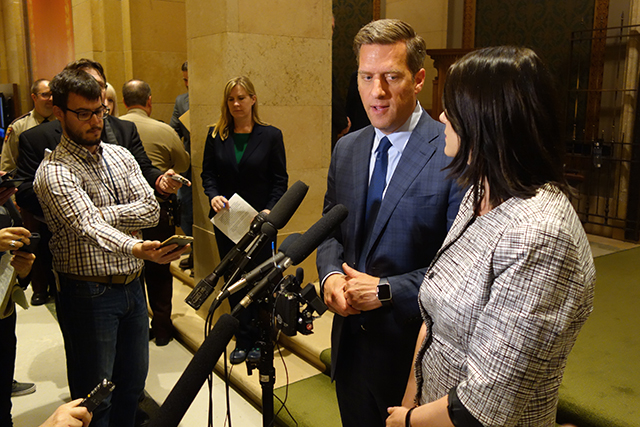 But by Sunday night, Dayton had all but killed any hopes that he might come around on any of it. He repeated that he would veto the spending omnibus and the new bill that addressed tax conformity and school funding. “I’ve seen nothing that would indicate to me that I would sign it,” Dayton said.

And he accused Republicans of putting measures he likes in with stuff he hates just to set him up. “They know I’m not going to sign it. So they can say, ‘Dayton vetoes school safety,’” he said. “It’s really appalling.”

‘This session has been a shambles’

One reason for the end-of-session drama this year is that nobody involved has forgotten last year. In May of 2017, Dayton signed budget bills that included a set of items he loathed: a tobacco tax cut ( including on premium cigars); an expansion of the estate tax exemptions; a commercial property tax freeze; and provisions to block undocumented immigrants from getting driver’s licenses.

There were other issues, too, but those four were on a list that he insisted be reversed or changed in exchange for calling a special session. A session that was needed because Dayton had used his item veto powers to zero out funding for the Legislature itself.

Dayton and the GOP Legislature fought over the move in court and eventually called a truce. But it might have left Dayton reluctant to go through that process again. “The chances of a budget bill are pretty much slim,” Dayton said Saturday night, and putting school safety money into the same bill as the tax conformity language he already vetoed meant he couldn’t sign that either, he said.

Even so, he says he’ll take all the time the state constitution allows — 14 days — to consider any bills that come his way. “After what happened last year, I’m going to have staff go through the budget bill before I would even consider signing it,” he said.

Yet he already had a epitaph for the 2018 Legislature. “I think this session has been a shambles,” calling management of the final days “the worst I’ve ever seen.”

In fact, Dayton even appears ready to pass on a chance to declare victory on emergency school funding. The governor’s late-in-session request was for $138 million from the state surplus, money that would be sent to every school district in the state based on the per-student formula. When he first made the call, GOP lawmakers said it was too late, that they weren’t sure that some districts hadn’t mismanaged themselves into deficit, that most districts don’t need the money.

Gazelka, even called it “next to impossible” because of the late request. But then Dayton linked it to the tax conformity bill, and by Saturday night, GOP leaders had made a proposal to shift some money from a set of funds that could be used to get districts through the 2018-2019 school year. When lawmakers tackle the next two-year budget, during the 2019 session, they could make permanent fixes if still needed.

School boards would be allowed to use money set aside for staff development to fill budget holes. Under current law, diverting that money required agreement from the teachers union. School boards could also dip into money that is now for community education programs. Finally, there would be $50 million in money that should have flowed from the state for use of state school trust lands.

Dayton didn’t like it, saying it simply shifts money around rather than giving  new money to schools. It also exists inside the tax bill, which he has within his veto sights. School safety money is included in the same bill, but also in a bonding bill, which could face a better fate given some late support from Democrats in both houses and Hortman said early Monday she thought Dayton would sign it.

The lack of checked-off accomplishments at the 2018 session is stark given the limited list of must-dos with which lawmakers started the session.

Mostly, the session was supposed to be for issues that have emerged since adjournment last spring, including responding to the scourge of opioid addiction and overdoses; the scandal of abuse and neglect at elder care facilities; and the federal tax overhaul that could have substantial negative implications for Minnesota taxpayers if adjustments aren’t made.

After a string of sexual harassment allegations toppled two incumbent legislators and forced consideration of better protections for harassment victims both inside and outside of government, that issue was also expected to be addressed, as was student safety in the wake of school schools in Parkland, Florida and — on Friday — in Santa Fe, Texas.

For various reasons, many if not all of those issues transformed from must-dos to  must-don’ts, going from legislative issues to campaign ones. That became clear with Dayton’s parting shot at Republicans during the governor’s final legislative press conference.

“Their objective is to sign up with every monied interest, every special interest available to them: the big drug companies, the big multinational corporations, the NRA, the nursing home chains — everyone who has something they want for next fall.”

End-of-session drama raises larger question for Dayton, GOP leaders: What does compromise even look like anymore?