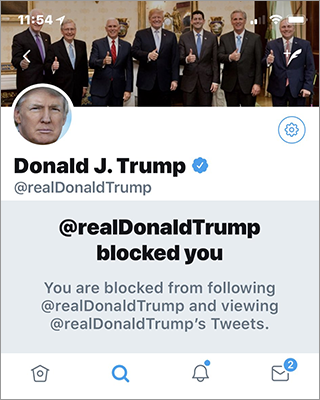 This week, a federal judge ruled that President Donald Trump’s habit of blocking people who disagree with him on Twitter is unconstitutional.

In a 75-page decision, New York federal District Judge Naomi Reice Buchwald wrote that Trump’s Twitter feed, @realDonaldTrump, constitutes a public forum, and that Trump doesn’t have the constitutional right to block people, based on their viewpoints, from that public forum.

When Trump blocks another user, it bars that user from interacting with Trump’s account altogether, including seeing the president’s tweets, responding to them, or reposting them on the blocked user’s own page.

Trump may be a notoriously prolific Twitter user, but he’s far from the only elected official who employs the platform — or who blocks people from viewing his account.

Which raises the question: What, if any, are the implications of Buchwald’s decision for elected officials in Minnesota who block people on Twitter?

It’s not uncommon, on Twitter, to see a dust-up that results in some official or other blocking some person or other for something they said on the social media site. In March, Minnesota Rep. Ilhan Omar blocked a local reporter after the reporter said she expressed support for another journalist’s work. After people replied, criticizing the move, Omar said it was her personal page and she reserved the right to block whomever she chose.

Officials in local city and county government replied, debating the decision. Some admitted to blocking people for things like offensive language, and spreading misinformation.

Crystal city council member Jeff Kolb replied that there’s a difference between blocking someone for harassment and blocking a reporter for stories you don’t like.

Kolb himself was blocked by Rep. Keith Ellison, whose district he lives in, after the two squabbled on Twitter in 2012 over voter ID. So was Joshua Warren, also a constituent, after he said he asked Ellison, over Twitter, about a board role he’d held. Ellison’s office did not respond to MinnPost’s request for comment on this story.

The Trump case came about when the Knight First Amendment Institute at Columbia University, on behalf of seven plaintiffs who Trump blocked on Twitter for expresing criticism, sued.

Judge Buchwald applied the public forum doctrine, arguing Trump’s Twitter account constitutes a public forum, just like a public park or government building, because it is owned, or in this case, controlled by the government. Both Trump and assistant Dan Scavino tweet official government business from it, and the administration has declared that his tweets represent official statements.

Under the public forum doctrine, it’s unconstitutional to restrict people from expressing First Amendment-protected speech — which political opinions are at the core of — from a public forum based on their viewpoint.

For example: you can’t restrict Socialists from a public park because of their political affiliation. That’s different from other restrictions, such as restricting everyone from the park after dark, which would be considered a time, place or manner restriction.

Maybe not. Consider these facts in the Trump case, wrote Jane Kirtley, the Silha professor of media ethics and law at the University of Minnesota, in an email: Trump is the president, the leader of the executive branch of the federal government. His administration has declared that his tweets represent official statements. He has White House staff manage the account sometimes, and the Department of Justice defended him in the case. “Change any of those facts, and the result could be different,” Kirtley wrote.

Kirtley said she could see the ruling applied to the executive branch at other levels — mayors, governors — if they’re using their Twitter account for official statements.

Experts disagree over whether members of Congress, like Ellison, may block people on Twitter. Prof. Eugene Volokh, a University of California at Los Angeles constitutional law professor told ProPublica that because a member of Congress is one of many, they aren’t the government. Others say if the member is using government resources to post, it could be considered a government account.

Technically, it can be a violation of Minnesota’s open meetings law for members of city councils, county boards and school boards to block people, said Minnesota Department of Administration spokesman Curtis Yoakum, in an email.

“The use of social media by members of a public body does not violate this chapter so long as the social media use is limited to exchanges with all members of the general public,” the statute reads.

But in other situations, whether or not people can be blocked is a little less clear.

The section of open meetings law that applies to social media accounts does not apply to members of the Minnesota Legislature. Nor does the Data Practices Act, a public records law that makes most information from most government agencies public.

When it comes to state legislators, though, Kirtley said things could be viewed differently.

In addition to being exempt from the state’s Data Practices Act, Kirtley said legislators “rarely have unilateral authority to do much of anything, so their tweets may not constitute ‘official’ action.”

Perhaps the most interesting facet of this case is that Buchwald chose to apply the public forum doctrine rather than invoke public records law, said Christopher Terry, a professor at the University of Minnesota’s journalism school.

“If there’s anything notable about this decision it’s the declaration that Twitter, and by extension, other forms of social media, (can) constitute a public forum,” he said.

Terry said he expected the ruling to fall more along the lines of whether Trump’s tweets are or are not public records, so people do or do not have the right to access them.

But by invoking the public forum doctrine, Buchwald leaves open the argument that other public officials’ Twitter accounts are public forums, too, Terry said.

If Trump’s Twitter account is a public forum, Terry said, you could argue other electeds’ accounts that contains official business could be considered a public forum. By that logic, it’s possible to argue that even officials who are exempt from public records law — like Minnesota’s legislators — can’t block people on Twitter.

Terry said it will be interesting to see, in the wake of this ruling, whether more officials start posting personal and official business on separate social media accounts — already a practice among some.

For officials who don’t want to potentially run afoul of the ruling, Buchwald suggested another practical solution.

When a Twitter user doesn’t want to see another person’s tweets on the platform anymore, there are two options: blocking and muting.

Whereas blocking prevents people from accessing what may constitute a public forum, muting allows the owner of an account to hide tweets so they don’t see them.

That’s perfectly constitutional, because, while it’s not permissible to block people from expressing opinions in a public forum — mentions and replies on Twitter, according to Buchwald, count — elected officials are under no obligation to see or respond to tweets.

“I think the muting and blocking distinction is going to be big in future cases,” Terry said. “They’re saying it’s not that you, in the case of being Donald Trump, have to listen to these people, but you also can’t, at the same time, shut them off from access to what constitutes an official form of communication from the government.”