As it turns out, failure might be an option.

It’s not just bills for which there was no agreement that are falling away in the last days of Legislature 2018. Gun safety bills such as universal background checks lacked majority support from the day they were introduced. So too for the measures to require hands-free devices for cell phone use in cars.

But also going away are issues that seemed to have broad agreement — at least when they were general concepts and not black and white legislation. Responding to the abuse of opioids and the overdoses that are too common; making changes to the state income tax to have it conform with last year’s changes to the federal code; a bonding bill to pay for repairs to existing buildings and infrastructure and to build new; coming up with ways to police elder care centers following a scandal of abuse.

All were given good chances. All are fizzling in the last hours, taken down by details or by linkage to other issues that have far less consensus.

That bonding bill? While Dayton wanted $1.5 billion worth of projects, House and Senate Republicans preferred to spend $825 million instead. That meant projects that some wanted did not make it into the final plans.

Yet in the House, enough Democrats supported the bill to give it the supermajority it needed to pass. Minneapolis DFLers Karen Clark and Susan Allen voted yes because it contained $5 million to improve the American Indian Center in Minneapolis.

The Senate version, however, faced a unified Democratic minority. None voted for the bill and it died.

It could live again. It is an election year, as Senate Minority Leader Tom Bakk, DFL-Cook, pointed out. And with all House seats on the ballot, and with the fact that lawmakers do like to list popular local projects on their campaign brochures, there are incentives.

That said, senators are safely in the midst of their four-year terms and have no brochures in sight.

And that tax bill? Absent a change in the state code, Minnesota taxpayers will pay a lot more because the state code no longer meshes with the federal code. Everybody wants to hold most taxpayers harmless and both Dayton and legislative Republicans want to give some cuts to some taxpayers. But they haven’t agreed which taxpayers, and Dayton thinks the GOP bill helps the wealthy and corporations more than lower income people. The GOP takes issue with that, saying that nearly every taxpayer will pay the same or less under their plan.

Regardless of those differences, Dayton vetoed the tax bill for other reasons — that the GOP has yet to deliver $139 million to send to the state’s school districts, some of which are having budget woes.

As of Friday afternoon, Republican leaders were softening a bit, saying they are looking for some ways to send some districts some money. But they haven’t been much into making across-the-board increases, whether districts are in need or not.

The Friday morning shooting at a high school in Santa Fe, Texas gave new impetus to pending measures to help “harden” school buildings against bullets. By happenstance, GOP legislators stood with a manufacturer of ballistic glass who demonstrated its effectiveness. They then used it to say that they want to get money to districts for these types of improvements.

By day’s end Friday, GOP leaders and Dayton seemed close to an agreement to send such a bill to Dayton as stand-alone legislation.

“If nothing else happens this session, I want to make sure the school safety legislation gets signed into law,” said House Speaker Kurt Daudt, R-Crown. He then quickly recognized how that sounded, given the general pessimism of the mood.

“Now don’t read into what I just said that I think nothing else is going to. But it’s my way of saying this is our No. 1 priority,” Daudt said.

Dayton agreed that there is agreement on that issue. But he then tied it to his gun safety bills — universal background checks for purchases and a way of “red flagging” people who shouldn’t be allowed to acquire guns. Those are unpopular in the GOP-controlled Legislature. 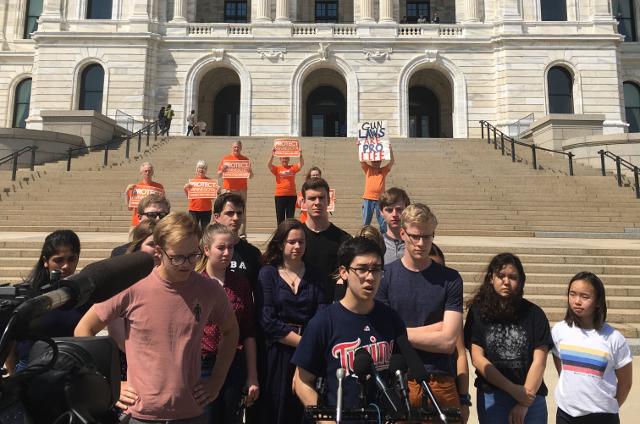 MinnPost photo by Peter Callaghan
Jorge Esparza, a student at Sibley High, called on the Legislature to take action on gun safety bills.

“It’s one thing to prevent someone coming into a school, which is vitally important,” Dayton said. “It’s another thing to prevent them from getting their hands on a gun when they shouldn’t have it.”

One secret to negotiations is to convince the other side that you don’t really want anything. Dayton certainly wants the emergency school funding and tied it to the tax conformity bill. But he keeps repeating that he can live without that bill, leaving it to the next governor and the next Legislature to hustle into session in January and try to fix it quick.

For his part, Senate Majority Leader Paul Gazelka, R-Nisswa, has said the same about the tax bill. That is, Dayton’s linkage to the school funding issue might not be that powerful. Gazelka, however, remains the optimist among the political leadership of the state, saying again Friday he thinks things can work out.

Not even Gazelka can stop the clock. Midnight Sunday is the last point that a bill can be adopted. And Dayton says no special session to finish what isn’t finished by then.

“It’s like making sausage,” he said. “You just have to move it all together and figure it out in the end. I think some things will drop off, but I’m not going to comment about what that is at this point.”

Opening days of the election

“They have to go back to their constituents and show how they’re qualified to run state government,” Dayton said. “They have the majorities of both the House and Senate. How can they not get their work done in time?”

Bakk took some glee in describing the House Republicans’ election dilemma: “What are they gonna tell their voters? Send me back so I can do nothing again?”

Dayton, also not  on the ballot this year, plays some role in end-of-session time crunches. Yes, the Legislature has yet to deliver a supplemental budget measure and it hasn’t reached a deal with Democrats on the bonding bill. But that hasn’t stopped the governor from delivering a list of problems he has with the budget — 116 of them.

Gazelka said they are working through each of them and had actually accomplished that on 24.

But then it was Daudt’s turn to search for silver linings.

“One hundred and sixteen is less than usual,” he quipped. “So we’re doing good. We’re making progress.”