Two of the supposed must-dos at the 2018 session of Minnesota Legislature were undone in a single day — five days from session’s end.

Within an hour of the Senate adopting the House-Senate tax bill on Wednesday, Gov. Mark Dayton said he planned to veto it, which he did Thursday morning. Also on Wednesday, Democrats voted against the Senate bonding bill, which pays for public construction projects, denying it the super majority vote needed for new state debt. It was too small, they said, echoing a complaint Dayton has been making for weeks.

Soon after, the Senate GOP staffers had prepared a poster listing projects that might be popular in DFL districts that went down to defeat, at least temporarily. When a reporter commented on the quick turnaround, Senate Majority Leader Paul Gazelka joked: “We’re just that good.”

Yet the optimism Gazelka expressed at noontime was soon replaced by a darker mood, one that spoke to a realization that time is running out to get anything substantive done this session.

“Hearing the tax bill might go down; hearing the bonding bill did go down. It’s just difficult,” Gazelka said Wednesday. “I don’t know what we’re going to do at this point. I think we can still get there — it’s just that the timing is starting to run out.”

GOP: Dayton’s demand ‘next to impossible’

The drama surrounding the tax and bonding bills started Monday, when what appeared to be a routine press conference by Gov. Mark Dayton quickly became something else. At the time, it was expected that Dayton would make another impassioned request for emergency school funding, something he announced two weeks ago in response to news of budget cuts in at least 59 school districts across Minnesota.

What wasn’t expected was an ultimatum, though that’s what happened. Dayton said he would not accept any tax legislation unless Republican leaders agree to his school funding call. With one week to go, and with the governor reiterating his promise not to call a special session this year, Dayton had suddenly changed the dynamics of a session that already presented a difficult path to completion.

“My position is I will not engage in any negotiations on the tax bill or signing the tax bill until we have an agreement to provide emergency school aid,” he said. “There’s plenty of money in the tax bill, more than enough to keep teachers in front of school children.”

Dayton already had many issues with the tax bill, which began life as a way to sync Minnesota’s state tax code with the federal one after sweeping changes were made by Congress last year. The bill has since become more than that, and that was before the DFL governor decided to link it to any other issue.

Dayton appeared frustrated that his attempt to light a fire under lawmakers on the issue of pending school cuts had been met with, well, not much response at all. GOP leaders said that they didn’t have time left in the session to address the issue, and they didn’t share the governor’s urgency for sending $138 million to the state’s school districts. House Speaker Kurt Daudt, a Republican from Crown, had sent Dayton a letter suggesting that if the issue were to be taken up at all, it would need to happen in a special session.

Dayton’s ultimatum came as part of his first public comments since that letter. After the governor’s pronouncement, GOP leaders were at the ready to respond, and neither Daudt nor Gazelka appeared ready to give in. “One hundred and thirty eight million dollars at this late place in what we are doing is next to impossible,” Gazelka said. 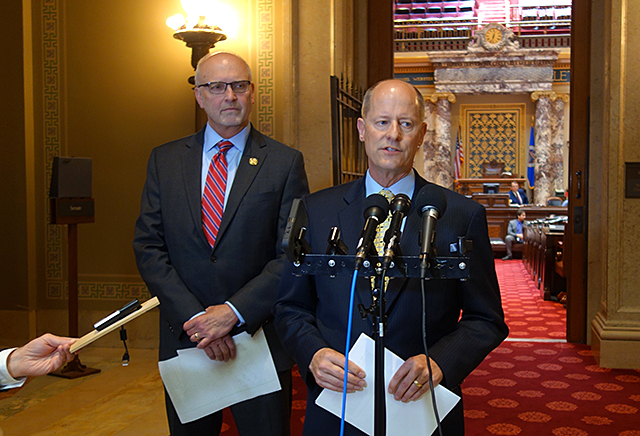 Gazelka then quoted from the governor’s own early April letter that listed what needed to be done — a list that didn’t include supplemental school funding. “We got that at such a late date that I don’t see how that possibly can happen and do all the other things that we agreed to,” Gazelka  said.

But as part of the end-of-session dance, leaders have to express confidence that they can complete the work on time. Daudt said he thought things were “progressing nicely” and would be meeting with Dayton shortly, a meeting Dayton had already said he wouldn’t attend. Daudt and Gazelka even left a press conference shortly before the appointed time to make sure they were on time for the meeting that wasn’t to be.

By Wednesday, however, it was harder to cover the stresses. Gazelka said he didn’t think Dayton should hold the tax bill “hostage” to the school funding issue. The GOP leader said the House and Senate had already given in on several aspects in response to Dayton concerns, such as a “trigger” that would reduce future tax rates should the economy improve and an expansion of tax exemptions under the estate tax.

“This bill should stand on its own,” Gazelka said. Linking it to school money is “a major shift from his April 9 list of what he wanted. Even then, we’ll try to figure out if there’s something we can do to accommodate the governor. I don’t know that we’ll find a solution, but we’re gonna give it our best shot.”

Dayton’s position on emergency school aid is part pique and part realpolitik. He remains angry that GOP leaders don’t see pending budget cuts in many school districts as an emergency. But he also contends that divided government means no side gets all that they want, but that everybody gets something.

“If they are willing to compromise and provide emergency school aid, I’m willing to concede some matters on the tax bill,” Dayton said. “I recognize they need to get some of what they want. … I have my priorities and they have theirs. We’re co-equal branches of government and we need to both acknowledge each other’s priorities.”

After vetoing the bill at Bruce Vento Elementary in St. Paul, Dayton sent a letter to the Legislature. While he cited the failure to act on the school funding issue, he also took issue with the bones of the bill itself.

“I am vetoing this bill because of its misguided priorities for corporations and the wealthy over the education of our children,” the letter stated. “Yet I remain hopeful that we can come to an agreement in the final days of the Session to fund Emergency School Aid and provide tax cuts that better serve our Minnesota families.”

On Thursday morning, the two GOP leaders sent Dayton a letter saying it is “imperative” they meet with him today. The same letter asserted that the Legislature has boosted school funding over the last two budgets and said that most of the state’s school districts are managing their budgets with money already available. That funding, they wrote, will be revisited in the next budget cycle starting in 2019.

“Despite our differences, we know there is a path to work together this year to make progress on issues that are important that are important to Minnesotans,” they wrote before asking for a meeting Thursday afternoon. Dayton earlier said he had spoken with Gazelka on the phone the previous evening and said the Senate leader is “sincerely trying to work things out.”

On Wednesday, Gazelka had conceded that perhaps the next Legislature would have to hurry into session in 2019 and take up meshing the state tax code with the federal rules before people and businesses start filing their returns.

Of course, that will be after an election that both parties hope will advantage their position on the issue — and many other issues. A Republican governor, for example, might be easier for GOP leaders to work with than Dayton. But a DFL Senate and another DFL governor would do much to weaken the Republican position.

It’s also worth noting that tax conformity and the bonding bill are just two of the big things still pending. There is some thought that a response to the opioid crisis could pass, with or without assessments on the drug industry to pay for it. And there is still a need to shore up public pensions. A supplemental spending bill that contains much of the rest of the legislative agenda for Republicans is still hanging around, as is a legislative response to reports of abuse in private homes for the elderly.