Then there were three.

With only a few weeks left in the 2018 legislative session in Minnesota, the governor and the House and Senate have all finally unveiled their plans to tackle the issue of tax conformity this year. The final piece of the puzzle came Tuesday morning, with the rollout of the Senate tax proposal, and both chambers are expected to pass their tax bills off the floor by the end of the week.

It’s taken months to get here. In December, Congress and President Donald Trump passed the biggest overhaul to the nation’s tax code since the 1980s, making major cuts to corporate tax rates while doubling the standard deduction for individuals and families and limiting personal and dependent exemptions. Unfortunately, those changes don’t line up neatly with Minnesota’s tax code, and the usually simple task of syncing the two has become one of the most complex tax conundrums state lawmakers have dealt with in years.

In shaping their plans, DFL Gov. Mark Dayton and Republican leaders in control of the Legislature have applied their own political philosophies on who should pay more or less in taxes, resulting in dramatically different plans. Ideally, all three sides want to come together and pass a single plan by May 21, the Legislature’s constitutional deadline to adjourn. Here’s a breakdown of all three tax plans; who will see tax increases and tax cuts under each; and what pieces could get bipartisan support.

The big picture: Since his first campaign for governor, Dayton has been talking about putting more of a tax burden on the state’s wealthiest residents. Now in his final year in office, his tax conformity plan continues that philosophy. His proposal would establish a new tax credit for Minnesotans who make less than $140,000 per year, or $280,000 for married filers. It would also apply a working family tax credit to more people. His plan pays for that credit by proposing a number of changes that would mostly impact businesses and corporations. Dayton also proposes delinking Minnesota’s tax system from the federal government by using federal gross adjusted income as a starting point to calculate deducations instead of the current system, which uses federal taxable income.

Winners: According to estimates from the Department of Revenue, Dayton’s new tax credit would cut taxes an average $117 for more than 1.9 million Minnesotans, and the expansion  of the working family credit would mean $160 more for 329,000 others.

Losers: Mostly businesses and wealthier residents. About 1,000 individuals would be impacted by a proposal from Dayton to reinstate a cut to the estate tax he signed last year, and he also wants to reinstate an automatic inflator on business property taxes that was eliminated last year. Dayton’s proposal would also hit companies that have stored their profits in foreign subsidiaries with a one-time tax.

What critics are saying: Republicans argue Dayton’s plan is too complicated and would actually raises taxes on all Minnesotans because next year he wants to continue a tax on health care providers that would have otherwise sunsetted. Dayton has said that analysis is “dishonest.”

The big picture: House Republicans said they took a simpler route to conforming state and federal tax code. Like Dayton’s plan, the proposal moves the state to a gross adjusted income system and lets Minnesota set its own rates and exemptions. But from there, bill author Rep. Greg Davids included an income tax cut for the second tier of individuals and families, lowering the rate from 7.05 percent to 6.75 percent over a two-year period. If passed, the proposal would mean the first rate cut in the state since 2000.

Winners: Those two provisions would provide a tax cut to about 2.1 million Minnesotans, Davids said. Corporate rates would also go down under the House plan from 9.8 to 9.06 over the next two years. 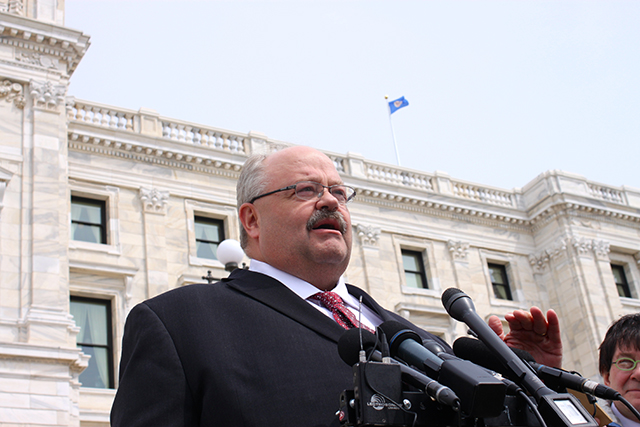 Losers: About 148,000 Minnesotans would see an increase in their taxes under the proposal, Davids said, particularly those in the so-called “shock losses” category: people who experience a sudden disaster at home, like a fire, but don’t have homeowners insurance, or someone dealing with a sudden and major health issue without insurance. Previously, Minnesotans could write that off on their taxes, but those deductions were eliminated in the federal tax bill, and the House bill conforms to the change.

What critics are saying: During a debate on the House floor this week, Democrats argued that the cuts in his bill are tilted toward wealthier residents and corporations, and Dayton has said he’s worried about the fiscal impact in future budgets.

The big picture: The third and final piece of the tax debate came down Tuesday morning with the Senate proposal. The key features of the bill include an income tax cut for the lowest-income families and individuals in the state, reducing the first tier rate from 5.35 percent down to 5.1 percent. The bill would also require the state to cut the state’s income tax rate and corporate tax rates by one-tenth of 1 percent if the November budget forecast show a surplus of more than $127 million and other indicators show economic growth in the state. The Senate bill, like the House and the governor, also would move the state toward the federal gross adjusted income system.

Winners: According to Senate Republicans, the proposal means 2.1 million Minnesotans would get a tax cut next year of up to $150. 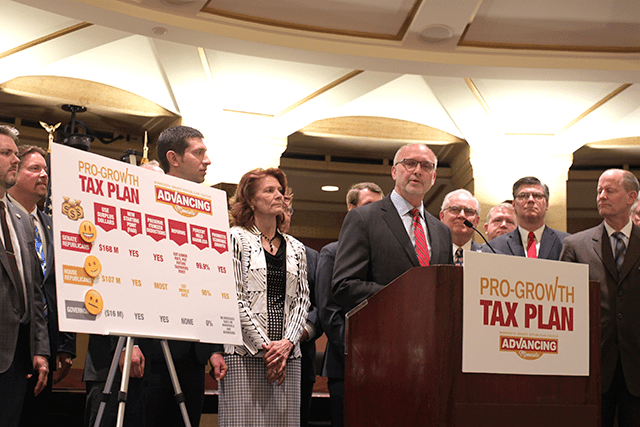 What critics are saying: Some testifiers, including the Dayton administration, have criticized the automatic tax reduction piece of the proposal, particularly in terms of the long-term stability of the budget. They say automatic income tax cuts could reduce the amount of money in the state budget for things like education or health care.

Who pays, who saves under the three tax plans being proposed at the Minnesota Legislature