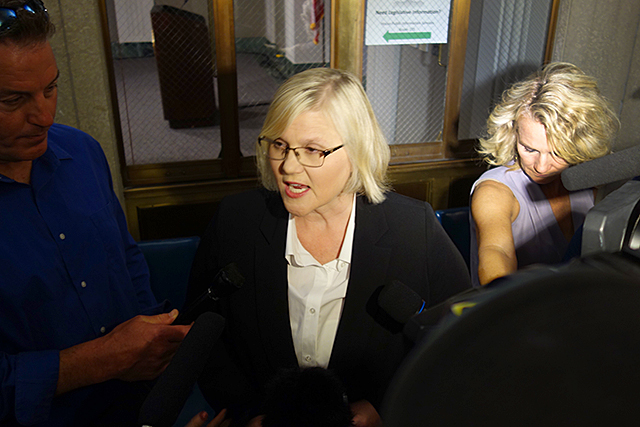 It might be a stretch to say that Matt Pelikan was ever the frontrunner to be the next attorney general of Minnesota — or even to be the leading DFL candidate for the office.

In the one test of his strength as a first-time candidate, Pelikan, an attorney from Minneapolis, finished second among delegates at the DFL convention, people who already tend to occupy the left end of the party’s spectrum.

But it turned out to be a significant second-place finish. Shortly after three-term incumbent Lori Swanson captured 52.2 percent of delegate votes, she announced that she was withdrawing from consideration for the party endorsement. Soon after, Pelikan, who had received 47.7 percent, was endorsed by an overwhelming voice vote.

In his convention speech and after, Pelikan presented a reason why progressive Democrats should oppose Swanson. On issues ranging from gun control to fighting pharmaceutical companies to enforcing antitrust laws, he said, she hasn’t done enough.

After the convention, one of two things could have happened, neither especially good for Pelikan. Swanson could have stayed in the race, a contest in which she would have been a formidable candidate, having won more votes than any statewide elected official in 2014. Or she could not stay in the race — and turn the attorney general contest on its head.

She chose the latter. So on a day when Pelikan stood with other endorsed DFL candidates at a press conference, a line of DFLers rushed to sign up to run against him in the August 14 primary. They include: 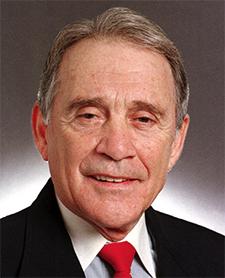 Waiting for the DFL primary winner will be Republican candidate Doug Wardlow, who has been endorsed by the Minnesota GOP and has been running undisturbed by the kind of political musical chairs that have swirled on the DFL side.  Wardlow is a former state House member from Eagan who currently works with the Alliance Defending Freedom, a national conservative legal group that defends what it sees as unconstitutional attacks on speech, assembly and religion.

Also filing this week was Bob Lessard, a longtime state lawmaker who filed as a Republican but who has been elected to other offices as a DFLer. Minnesota has not had a Republican attorney general since 1971.

‘Not fair’ to hold to DFLers to endorsement pledge

With Swanson out, the shape of the AG race didn’t so much take form but retake form. When the current AG was first considering the governor’s race earlier this year, a handful of DFLers planned their own campaigns. Among them were Pelikan, Rothman and Hilstrom. At the time, Ellison also acknowledged that he was giving the office serious consideration.

On Tuesday, all four were in again. The difference between then and now is that two other potential candidates — former state Rep. Ryan Winkler and former St. Paul city attorney Sam Clark — did not jump back in. Winkler has since endorsed Ellison. 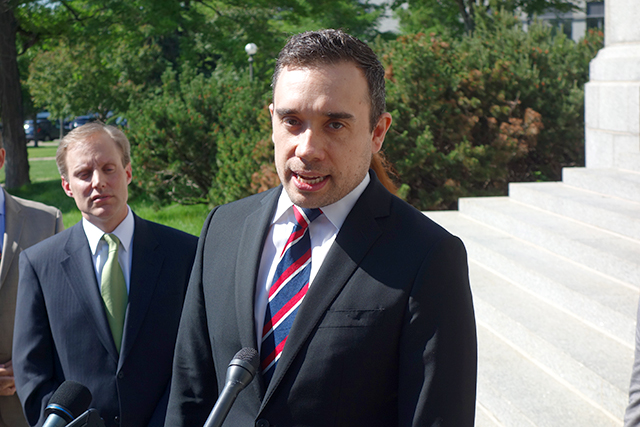 Pelikan has always said he would be in the race regardless of Swanson’s decision — and he still is, he said Tuesday, adding that he will still try to be the campaign’s most progressive candidate.

“I am asking you to make a change,” he told delegates at the DFL convention. “It’s hard. I get it. So I’m going to speak the ugly truth for a moment”: that Swanson hasn’t been as aggressive as other attorneys general in taking on opioid makers; or in fighting Trump administration moves on net neutrality or the immigration ban.

Pelikan does have a significant endorsement. Rev. Nancy Nord Bence, the executive director of Protect Minnesota, a gun-control advocacy group, endorsed and introduced Pelikan at the convention over what she perceived as Swanson’s weakness on gun safety issues.

Pelikan’s reward for having the gumption to stay in the race when Swanson shifted political gears? The DFL endorsement. But when she shifted gears yet again, he was the first casualty of the rush to the filing window. Pelikan said he planned to stay in until November, even as many DFLers — even those who claim to respect the endorsement — backed away from him.

Gov. Mark Dayton — who has endorsed the DFL-backed candidates for both governor and state auditor — opted not to back the DFL’s official choice in the AG race. Instead, he went with Ellison.

Pelikan’s endorsement win is not without its benefits: party organization, voter lists, some money. But Ellison is a serious campaigner who has used his time during his often uncompetitive re-election campaigns to organize beyond his district. And it isn’t as though Rothman and Hilstrom are in need of jump-starting their efforts. Both had already begun assembling campaigns in the winter, after all. “It’s a ten-week campaign to the primary,” Hilstrom said. “I don’t think we’ll have any trouble getting up and running.”

Ellison said he doesn’t think it is fair to hold DFLers to honor an endorsement when the seat had an incumbent in place until after the convention. He said he would have asked for the endorsement “if I had not heard from the attorney general herself” that she wasn’t running for governor. “The chance to let the primary electorate decide is fair,” Ellison said.

The office of state attorney general was created by the state constitution and its duties are outlined both in statute and in common law. Despite the title, the holder does not actually need to be an attorney but only a registered voter and at least 21 years old.

The office provides legal counsel to state agencies, and currently includes divisions that enforce laws governing fraud, health, housing, veterans services and consumer protection. It also has the authority to assist in criminal prosecutions, often for smaller counties without the resources or expertise to prosecute complex crimes. 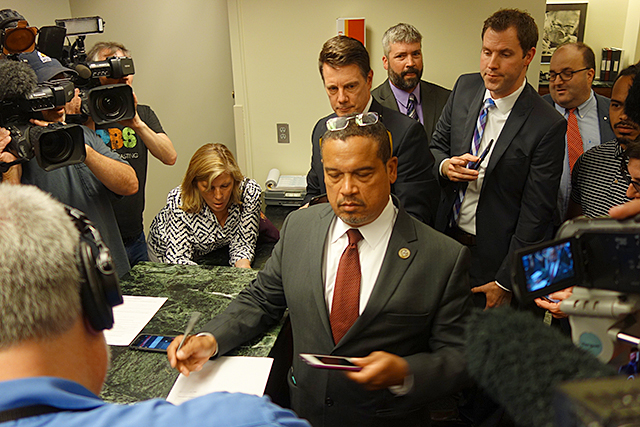 It hasn’t worked out that way in Minnesota, but the office can be a major player in state and even national politics. Attorneys general from other states have taken the lead in the last two administrations to challenge acts of the president. It was Republicans who led challenges to President Obama’s health care law and immigration policies just as it is Democrats who have taken on the Trump administration on immigration, net neutrality and even the emoluments clause (which prevents presidents from accepting payments, gifts or titles from other nations). 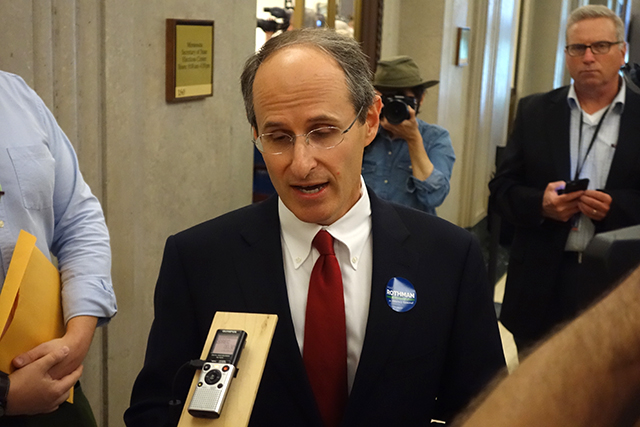 MinnPost photo by Peter Callaghan
Mike Rothman being interviewed after filing the paperwork to run in the AG race.

Pelikan complained that Swanson hasn’t done enough with this power. And without pointing to Swanson directly, Ellison said he wants the office to be more assertive.

Said Hilstrom: “Attorneys general are the front line of defense against what’s happening in Washington, D.C.” 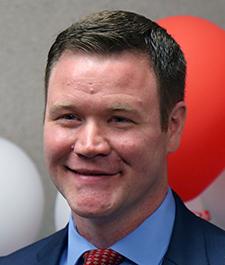 That’s one of the places where Wardlow aims his criticism at the entire DFL field. He said Swanson was too active in taking legal action against the federal government and said she did so for political, not legal reasons. The field of candidates to replace her will continue that, Wardlow said.

“The states need to get involved in litigation against the federal government only when it’s in the best interest of the state and when it’s absolutely necessary to preserve important constitutional rights or state sovereignty,” he said. “It shouldn’t be for political reasons.”

For now, he said he’ll keep building his campaign and await the results of the DFL primary. While he expects Ellison to be the winner, he said the others have similar views on the role of the attorney general. “Each one of those candidates is already pretty far to the left and I don’t know if they can really move much farther,” he said. 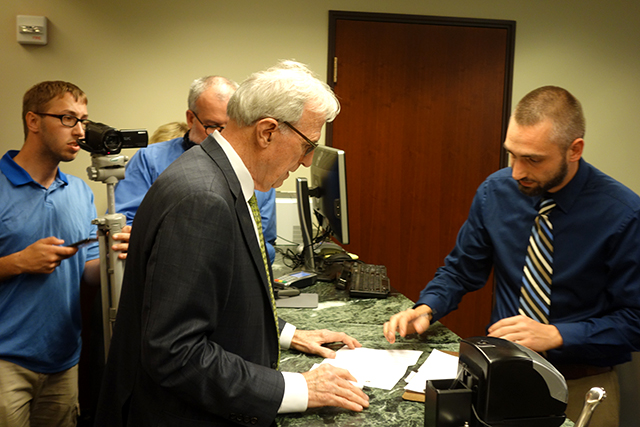 Attorney general state of confusion: How one Minnesota political race went from boring to bonkers in 48 hours