It’s a popular stunt for a politician who’s running or holds office statewide to visit every county in his or her state.

That’s easy in some states where there aren’t that many counties, but it’s kind of tough in Minnesota. Two years ago, Gov. Mark Dayton failed an attempt to visit every one of Minnesota’s 87 counties in 86 days. According to the governor himself, stuff kept popping up, throwing off what must have been a tightly-planned schedule: four score and seven counties.

A reasonable Minnesotan, or a weary politician, might ask: Why so many counties? Strap in, dear reader, for answers to that question and more in this very brief history of Minnesota’s counties.

Have we always had 87 counties in Minnesota?

Nope. When parts of what’s now Minnesota were part of Wisconsin territory county, they were part of a large county called St. Croix. When Minnesota became its own territory, residents clambered for more counties. After all, critical functions of government, like courts, were centered in county seats and traveling long distances was no easy task in the nineteenth century.

Soon, the territory had several counties on its eastern side, and others that formed bands across, which at that time included parts of present-day North and South Dakota. 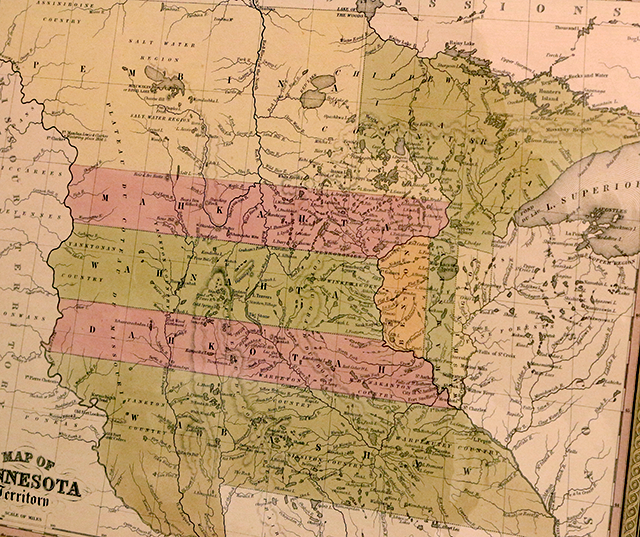 MinnPost photo by Greta Kaul
A 1851 map of Minnesota Territory courtesy of the Minnesota Historical Society.

Look closely at some of these maps and you’ll notice quite a few counties that no longer exist. Toombs County, on the state’s western border didn’t survive under that appellation long once its namesake, a U.S. senator, turned out to be a Confederate, said David Lanegran, a geography professor emeritus at Macalester College. It was renamed Andy Johnson County, after President Andrew Johnson, and finally renamed Wilkin, after a territorial secretary who died fighting as a Union soldier in the Civil War. 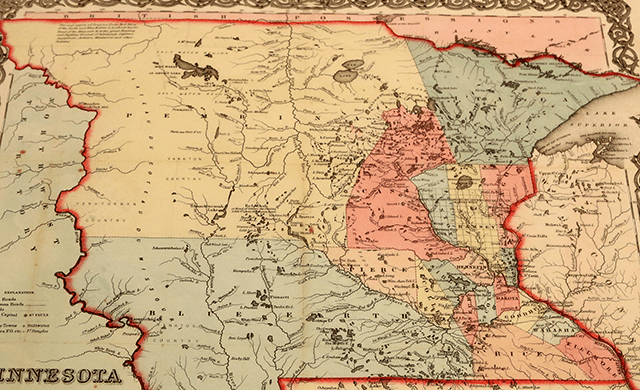 MinnPost photo by Greta Kaul
An 1854 map of Minnesota courtesy of the Minnesota Historical Society.

Other county names you won’t find on the map anymore? Monongalia, Mahkato, Wahnahta, Doty, Davis, Pierce, Newton, Big Sioux, Buchanan and Pembina (check out this colossus in the northwest corner of the state in the maps above), among them. Perhaps the state’s most ephemeral county was Doty, which existed for less than a month near Duluth. Despite its short tenure, it nonetheless made it onto at least one map: 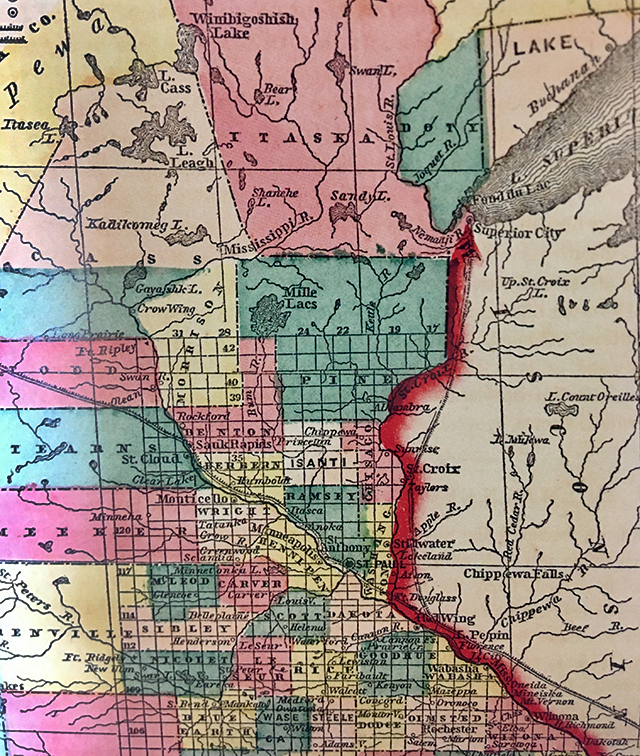 MinnPost photo by Greta Kaul
An 1857 map of Minnesota courtesy of David Lanegran.

(Aside: Most of these maps come from atlases, which were popular among middle-class families — even sold by subscription — in Minnesota’s early days. At that time, people’s thirst for information about the expanding country was insatiable, Lanegran said, so they were updated frequently.)

Minnesota became a state in 1858, and counties changed boundaries and names often for a few decades thereafter.

Detailed online maps of different iterations of counties can be found at the website of the Newberry Library. 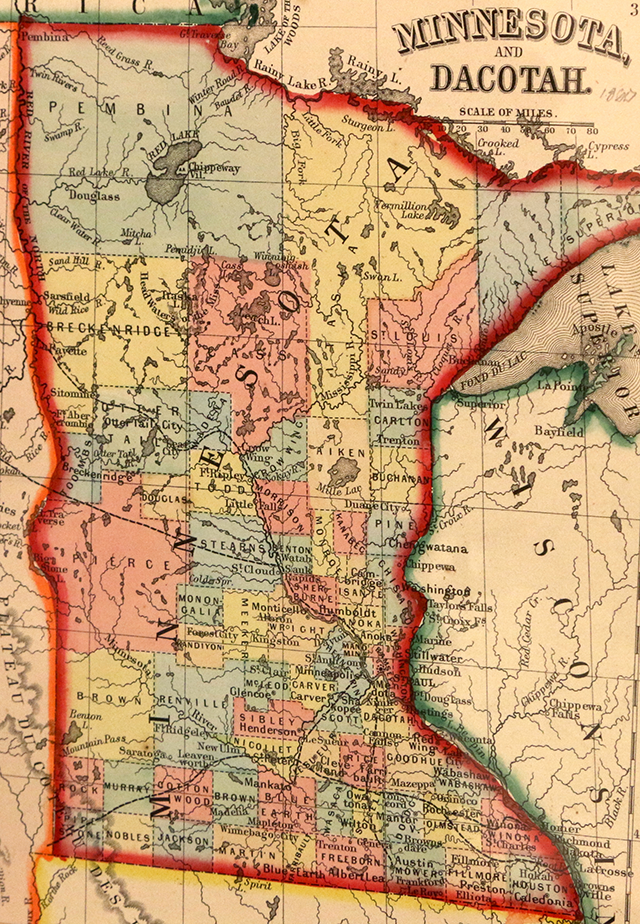 MinnPost photo by Greta Kaul
An 1860 map of Minnesota courtesy of the Minnesota Historical Society.

Who decides where the county lines should be drawn?

The Legislature has that power. Per the state’s 1857 Constitution:

The Legislature may from time to time, establish and organize new counties but no new county shall contain less than four hundred square miles; nor shall any county be reduced below that amount; and all laws changing county lines in counties already organized, or for removing county seats shall, before taking effect be submitted to the electors of the County or Counties to be affected thereby at the next general election after the passage thereof and be adopted by a majority of such electors. Counties now established may be enlarged, but not reduced below four hundred (400) square miles.

In Minnesota, county lines follow two things: private property lines from the federal survey, which blocked the land out in east-west, north-south lines, and natural boundaries, i.e. waterways, said Roderick Squires, a professor of geography at the University of Minnesota. Lots of Minnesota county boundaries are funky-looking because Minnesota has lots of water.

While creating a new county is a legislative process, changing the boundaries of existing counties requires approval of a majority of residents, according to the modern state Constitution. So in cases where the Legislature split large counties into smaller ones, a vote would be required.

Minnesota has 87 counties because, as residents moved across the state, they kept petitioning the Legislature to make them new counties.

“Although the state created the counties, it was the local residents who kind of demanded counties,” Squires said. “For example, Brown County, that is now on the western margin, there was a huge county for a long period of time, and then it was slowly broken up as people moved in.”

People wanted to be close to county seats because that’s where the services — the law, the courts, etc. — were. And landowners wanted a county seat in their town because it increased the value of their property.

“You can watch the agricultural settlement move across the state with the formation of the counties,” Lanegran said.

Apparently, Minnesotans are satisfied with 87: Minnesota’s counties have been pretty stable for about a century. None have been created since 1922, when Lake of the Woods was added.

The legislature still has the option of creating more counties, though since doing so would necessitate changing the borders of one or more of the existing counties, a vote of residents would have to be taken.

What are Minnesota’s counties named after?

According to the Association of Minnesota Counties, which compiled the origins of county names from a Minnesota Historical Society source, most Minnesota counties were named for people. Many of them Minnesotans,  like Henry Sibley and Alexander Ramsey, and others — like Sam Houston and George Washington — not.

One, Winona, was named after a woman, and an American Indian woman at that.

Some counties have American Indian descriptions a little more broad than the previous category or are named after tribes. They include Anoka, Dakota, Isanti, Kandiyohi Koochiching, Mahnomen, Waseca and Watonwan.

Look at a map of counties across the country, and you’ll probably notice eastern states tend to have a lot more of them. In the West, there are fewer.

Considering Minnesota’s total area, roughly 87,000 square miles, 87 counties isn’t a ton, proportionally. For comparison, Rhode Island’s five counties (tied with Hawaii for having the second-least amount of counties of any state, after Delaware, with three) average 309 square miles, and Alaska’s 29 average 23,000 square miles (we’re including county equivalents, here, which include cities that are considered counties for Census purposes, plus Alaska’s boroughs and Louisiana’s parishes).

When it comes to packing people in, Minnesota falls near the middle too, with about 63,000 people per county on average. Of course, the counties vary wildly in population. Hennepin has 1.2 million people. Traverse, Minnesota’s least populous county, has about 3,400.

Eighty-seven still seems like a lot of counties. Can’t we get rid of a few?

It’s been proposed. Not everyone has always been excited about Minnesota having 87 counties. Former Minneapolis Rep. Phyllis Kahn once floated a plan that would merge Minnesota’s counties into 10 mega-counties.

That didn’t happen, and it’s not likely to at this point, Squires said.

Counties have formed the backbone of how things work in this country. Political units, like legislative seats are often based on them. They administer services. And, besides, with different IT systems, combining them would be a nightmare, Squires said.

The number of counties Minnesota has does present some challenges: for counties, especially those with small tax bases, it can be difficult to cost-effectively provide services, such as corrections and medical examiners or  to a relatively small number of people spread out over many miles. That’s why we see things like Tri-County Community Corrections, which serves Norman, Polk and Red Lake counties, and the Midwest Medical Examiner’s Office, which serves many counties.

Maybe, in the internet age, people don’t need to visit their county seat as frequently as they once did. But on the other hand, how far do people want to drive to get a new driver’s license or to court or the hospital? What about seniors or people with certain disabilities, who often rely on county programs but don’t always drive?

Plus, there’s the matter of pride.

“There’s such great pride in the counties — a sense of ownership of the counties,” Squires said.