The Minnesota Republican Party has had its share of charged, nail-biting moments at its state conventions.

The first day of the 2018 convention in Duluth wasn’t one of them.

After a long spell of downtime while convention organizers were forced to switch from faulty electronic ballots to paper balloting, the nearly 1,700 delegates endorsed state Sen. Karin Housley to run against DFL incumbent Tina Smith and state Rep. Jim Newberger to run against DFL incumbent Amy Klobuchar. Both Housley and Newberger faced endorsement challengers, but both won easily on the first ballot.

Housley’s race against Smith is expected to be more competitive than Newberger’s challenge to Klobuchar. Smith, appointed by Gov. Dayton to replace Al Franken, has limited experience on the campaign trail and will face Housley, a state Senator since 2010, on relatively equal footing. Former George W. Bush administration official Richard Painter is also running for Senate on the DFL side.

In her endorsement speech, Housley was greeted with a standing ovation and delivered the delegates what they wanted: broadside attacks on Smith, who Housley called a member of the “metro area liberal elite… a senator who has done nothing but stand in the way of President Trump… a self-proclaimed member of the resistance [with] a do-nothing mentality.”

Housley and Smith will facing off amid an election year when a record number of women will be on the ballot. “This is the year of the woman across the country,” Housley noted in an interview. “I hope it can encourage more women to stand up and not always have a man encourage them to run but to actually just jump in and run on their own. If it does that one thing, that we have a woman running against a woman, it would be a success.”

Newberger faces a more challenging race, against two-term incumbent Klobuchar, who won her last race, in 2012, with more than 65 percent of the vote. In his endorsement speech, Newberger vowed to “upend the neo-socialist DFL.”

“The 12-year reign of ultra-liberal Amy Klobuchar must come to end,” he said.  “Minnesota needs to send Senator Klobuchar packing. For nearly a decade she has fed the swamp.”

The real meat of the convention comes on Saturday, with the party’s endorsement of a candidate for governor. Hennepin County Commissioner Jeff Johnson, the party’s gubernatorial candidate in 2014, holds the delegate lead, but some delegates may be quietly supporting a candidate who isn’t making an appearance. Former Gov. Tim Pawlenty bypassed the convention and the endorsement process and will challenge the Republican endorsee in the August 14 primary. 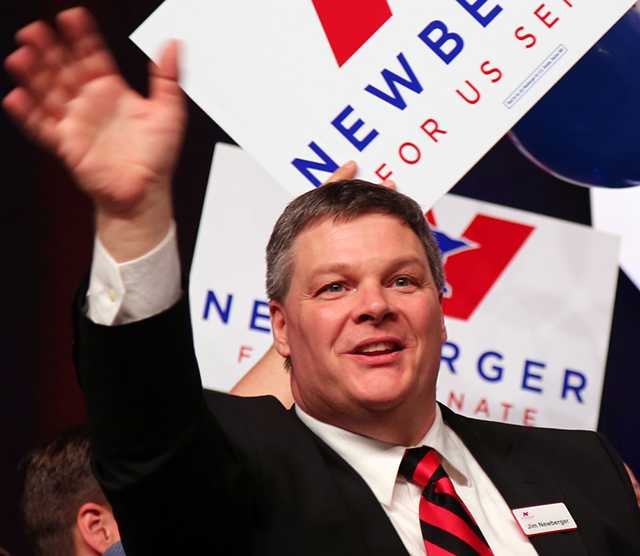