At one point during the 5th Congressional District DFL’s special convention on Sunday, the candidates in the running to succeed Rep. Keith Ellison were asked that inevitable question: Will you suspend your campaign if you are not endorsed?

At normal endorsing conventions — where die-hard activists convene and deliberate over who should receive the party’s official stamp of approval — answering this question in the negative makes a candidate a pariah, at least in that moment, and guarantees him or her boos and heckles.

But Sunday’s gathering was no ordinary convention: With the incumbent Ellison filing to run for attorney general on June 5, following current Attorney General Lori Swanson’s last-minute bid for governor, 5th District Democrats had no obvious opportunity to endorse any of the five candidates who filed to run for the seat after Ellison’s announcement.

With a week’s notice, then, leadership of the 5th District DFL announced they’d hold a convention so delegates could endorse a candidate. But with the filing deadline having come and gone, the five candidates in the race were guaranteed to appear on the ballot in the Aug. 14 primary.

So, the two leading candidates at the convention — state Rep. Ilhan Omar and state Sen. Patricia Torres Ray — both answered that they would not suspend their campaigns if they failed to get the endorsement. Instead of boos and shouts of disapproval, they were met with a few scattered groans. A man got up from his chair and walked to the door, but not before yelling: “Motion to adjourn!”

Though the convention ultimately completed its business — Omar was endorsed on the second ballot, earning 68 percent of support — that wayward delegate summed up a viewpoint and mood held by no small number of 5th District Democrats: Why was this convention happening, and what would its endorsement really mean, anyway?

When the CD5 DFL executive committee announced the special convention on June 7, they wrote in a Facebook post that Ellison’s decision to run for attorney general created “confusion and interest” over how the party would handle the primary.

“The elected delegates of our party unit deserve the chance to express their opinion in the primary race, and if they so choose, endorse a candidate,” the post read. “It is also in the best interests of the DFL to hold a convention as soon as possible in order to give any potential endorsement the most weight.”

The post said the decision for a special convention was supported by an “overwhelming majority” of the CD5 DFL’s executive committee. But many Democrats, from rank-and-filers to prominent activists, blasted the decision. That the convention was so hastily arranged — and that it was scheduled on the afternoon of Father’s Day — made them question the fairness and legitimacy of the process.

“On a summer weekend when I would imagine most of the 700,000 people who live in the district have no idea it’s happening, a few hundred people will put the full weight of the overwhelmingly dominant party behind one person,” wrote former Minneapolis mayor R.T. Rybak on Facebook.

Other critics shared concerns that the delegates who would attend the special convention were selected when there was no prospect of a CD5 primary. Because candidates traditionally work to cultivate support through the various stages of the delegate selection process — from caucus night to district conventions and onward — Sunday’s convention would be particularly unusual.

Two candidates in the CD5 race, former Minnesota House Speaker Margaret Anderson Kelliher and activist Jamal Abdulahi, opted not to compete for the endorsement at the convention, citing concerns about the entire process, from the truncated timeline to it taking place on Father’s Day.

In a statement, Kelliher said that the convention “needlessly limits discussion and debate and does not represent our Democratic values. … This primary is for the 700,000 Minnesotans of the 5th Congressional District and should not be decided by a small group of people.”

Abdulahi, who founded the DFL’s Somali Caucus, said in a statement that “I find the hastily scheduled ‘convention’ for Sunday 6/17 is antithetical [to] everything I have worked for.”

Two of the leading candidates in the race, Omar and Torres Ray, backed the endorsement process, and they packed the auditorium at south Minneapolis’ Clara Barton Open School with their supporters, clad in blue shirts for Omar and white for Torres Ray.

A significant portion of the 187 delegates who participated in the process, however, didn’t necessarily endorse the convention. Jeff Gonzalez, a delegate from north Minneapolis’ Senate District 59, said “it’s too soon to be making this kind of decision. We’ve had very, very little time to actually be able to research the candidates… To be fully transparent, let candidates make their case to the voting population.”

Gonzalez said he planned to vote “no endorsement” when it came time to cast his ballot. Neal Kelly, a delegate from Minneapolis, said he had planned to do the same — but changed his mind after the candidates addressed the convention.

Both Omar and Torres Ray gave passionate speeches that touted their immigrant backgrounds and emphasized their voices as essential in the era of Donald Trump. Torres Ray drew loud cheers when she told delegates to “tell President Trump you are sending a wise Latina to Washington;” Omar got a similar response for her calls to abolish the federal Immigration and Customs Enforcement agency and to end private prisons. (Frank Drake, who challenged Ellison in 2016 as a Republican but is running this year as a Democrat, also attended the convention, but appeared to have very little delegate support.) 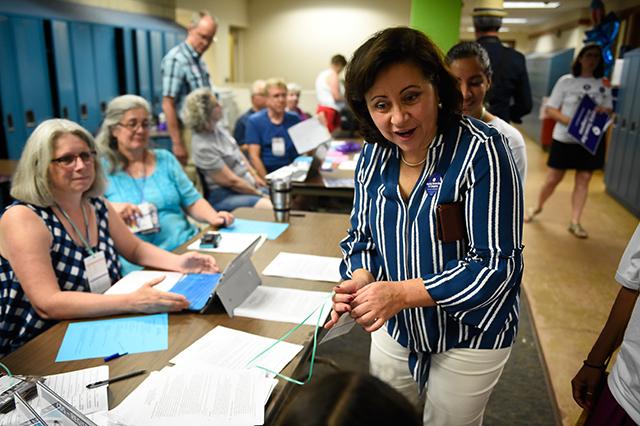 Before the second ballot of voting opened, Torres Ray addressed the convention in a way that suggested she might concede the endorsement. She praised Omar and noted the “historic moment” that saw “two amazing immigrant women” running for Congress in Minnesota, but then reiterated “we are running in a primary” and told her supporters that she would not be offended if they went home.

Surrounded by supporters chanting her name, Omar told the convention she was “excited about the movement we have started, and I’m excited about what it’s going to mean for us going into the 14th of August.”

As the endorsed candidate, Omar will now benefit from the institutional support of the DFL campaign apparatus, which includes access to voter information and volunteer muscle. She also can claim strong support from the activist heart of the CD5 DFL primary electorate, but those leaving the convention had different ideas about what that means for the primary, and whether or not Omar’s victory makes her a clear favorite to win on August 14.

State Rep. Raymond Dehn, who represents a downtown and north Minneapolis House district, has endorsed Omar. He told MinnPost that her support extends far beyond a gathering of a few hundred activists.

“This was not just about building support around an endorsement of the CD5 convention,” Dehn said. “She’s been building support for a long, long time. The things she’s fighting for are issues that affect everyday people. So I think the significance is we have an incredible person who’s been endorsed for CD5, and there’s some other things that come with that — she’s a Muslim woman, an immigrant, but first and foremost, I think about an incredible individual who will be able to carry on the legacy of the work that Congressman Ellison started back in 2006.”

Shay Berkowitz, a delegate who raised a motion to adjourn before the second ballot, expressed affection for Omar but said the endorsement process that day was “fake” and meaningless.

“This race is going to be won in the primary,” she said. “And to convene delegates that were never elected or signed on, myself included, to do an endorsement process in 10 days is not broad enough, inclusive enough, for who we are as the 5th CD. It diminishes the value, the importance, the significance of the endorsement process.”

Berkowitz said that Democrats should have been out demonstrating against the Trump administration and its policy of separating families at the border, instead of wasting time and energy on a convention. “That’s not who we are,” she said. “It doesn’t bode well for the DFL.”

State Rep. Karen Clark, a delegate supportive of Torres Ray, said she favored not having an endorsement, and worried that the process would turn people off from the process in a critical election year. “We need everybody together. I’m afraid that some of what may have happened today was a loss of momentum for that,” Clark said. “I think some of those people feel closed down, and probably are not going to do too much.”

With 57 days to go until the primary, the five candidates in the race will now make their case to voters, party endorsement or no. Omar will not be the only candidate to cultivate a donor coalition and garner endorsements — Torres Ray and Kelliher have long-standing support bases of their own in the district — and the primary is expected to be hard-fought.

But the DFL’s official role in this fight is done, and after sustaining heated criticism over the process, CD5 chair Brandon Schorsch said he was pleased about the outcome of the convention. 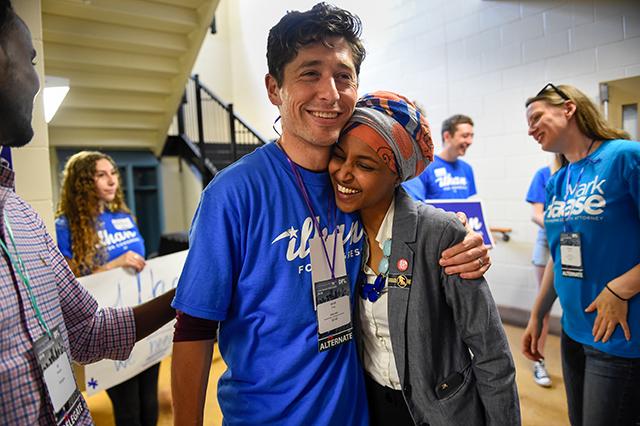 “The more that people know they have agency to come in and make decisions because they are shareholders and stakeholders in an organization, I think delegates did that today, and I’m happy delegates came and made the decision they felt was right,” Schorsch said.

“I think this is a good thing for the party as an organization,” he said. “We have endorsements up and down the ticket, now that means our teams are able to go and do direct coordination.”

Standing on the convention floor as delegates filed out and Omar’s team celebrated, Schorsch posed for a photo he wouldn’t have been able to take a few minutes prior: smiling and holding a big, blue Ilhan for Congress sign.

For what it’s worth, CD5 DFLers endorsed Ilhan Omar. But what’s it worth?