It wasn’t so much a fundraiser, though there was a pitch for money.

It was more of an enthusiasm-raiser.

The Bernie Sanders Reunion at First Avenue in downtown Minneapolis Friday seemed intent not just on getting the Vermont senator’s supporters back together — but getting them excited to work for DFL candidates on the ballot this year.

The primary beneficiary was the campaign of the guy that sponsored the event: U.S. Rep. Keith Ellison, who is running for attorney general of Minnesota. But also riding whatever wave was triggered by the mid-morning rally was U.S. Sen. Tina Smith, who introduced Ellison and joined in the traditional arm-in-arm-in-arm photo op at the end of the rally.

Sanders, a Democratic Socialist who was a candidate for the Democratic nomination in 2016 — and who sounded like a candidate in 2020 — was repaying the support given him by Ellison. The Minneapolis Democrat was a prominent endorser of Sanders in the latter’s run against Hillary Clinton — support that was amplified by coming early in the 2016 election cycle.

And while much of Sanders’ speech to those who packed the floor and balcony of the music club focused on issues important to progressives across the country such as health care, the economy and the environment, Sanders also challenged his supporters to get and remain active. “The antidote to political depression is activism,” he said.

While he complimented Minnesota’s highest-in-the-nation voter participation (joking that Vermont was bent on topping it), he also said that Minnesota could still do better.

“The political revolution that Keith and I and others have talked about is not just a progressive agenda that speaks to the needs of working families, it is the need to create a national grassroots movement where ordinary people stand up to the billionaire class and take back this country,” Sanders said. “By electing Keith, and reelecting Tina and Amy [Klobuchar], you guys can help lead this country in that direction.”

Addressing those in the room as “brothers and sisters,” Sanders said that his positions on issues are shared by majorities of Americans. “Our job  — in a way that we have never done it before — is to get out into the streets and make it clear what Trump stands for and make it clear what our alternative, progressive vision is about,” Sanders said. “When you work hard and talk to people and knock on doors, there is nothing that we can’t accomplish.”

Sanders called Ellison’s decision to give up his seat in the U.S. House and run for attorney general “bittersweet.”

“But Keith has concluded — and I think it is the right decision — that he can play more of a role in fighting for working people, in fighting for consumers and farmers, for small businesses, for women’s rights, for health care, for equal protection under the law by becoming the next attorney general of the state of Minnesota.”

‘Much bigger’ than the AG’s office

Most of Sanders’ 34-minute speech was focused on national issues, and he took credit for a political revolution that changed how Americans think about economic issues such as minimum wages and health care. Sanders was an early national supporter of a $15 minimum wage and a single-payer, Medicare-for-all health care system.

Those ideas, he said, were once labeled “radical and crazy” but have since gained acceptance. “On virtually every major issue facing the people of this country, the overwhelming majority of Americans are on our side,” Sanders said. 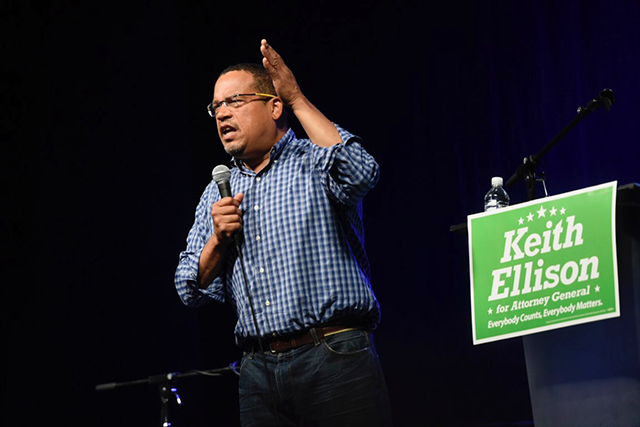 MinnPost photo by Tony Nelson
Rep. Keith Ellison: “Attorneys general all over this country led the fight against the Muslim ban. That fight was attorneys general, it was Hawaii vs. Trump.”

Ellison used his 10-minute comments both to introduce Sanders and to motivate those in attendance. “For me, yes it is about winning the Minnesota attorney general’s office,” said Ellison. “It is about that. But it’s not only about that. It’s much bigger than that. Our nation is at a moment in history where every noble, decent, fair, green impulse is under attack.

“What we really need you to do when you leave here today is to ask yourself a question. I want you to say ‘Self, what can I do a little bit more to turn out the vote, to engage one more person, two more people. What if I registered one person a day until the election?”

Like the other DFL candidates for attorney general, Ellison sees the office in a different light since the election of Donald Trump as president; Democratic AGs around the country have led the legal challenges to Trump policies from the travel ban to net neutrality.

“Attorneys general all over this country led the fight against the Muslim ban,” Ellison said. “That fight was attorneys general, it was Hawaii vs. Trump.” And while the Trump Administration’s third iteration of the travel ban was upheld by the Supreme Court, he said: “This fight ain’t over, y’all.”

He said there are pending legal battles over family separations at the southern border. “As attorney general, I will fight this, I promise you,” he said.

He also cited cases regarding net neutrality and economic justice, specifically the sanctions against Wells Fargo for abusing customers accounts. “If somebody opens up 20 accounts in your names and you didn’t ask for them? We’re going to sue the shit out of them,” Ellison said.

Any mention of recent Supreme Court nominee Brett Kavanaugh was met by boos. And Kavanaugh didn’t appear to gain any Senate votes in Minneapolis Friday. Both Smith and Sanders said they would oppose his confirmation.

“I have zero doubt that Kavanaugh will join the other four right-wing justices and vote against women’s rights, vote against the environment, vote against health care, vote against workers’ rights,” Sanders said. “And together we must do everything we can to prevent his appointment to the Supreme Court.”

Smith cited her concerns about a future Supreme Court reversing the previous ruling that the U.S. Constitution gives women the right to choose to terminate pregnancies, the case known as Roe v. Wade.

“He was selected from a list that was carefully handpicked from the Federalist Society and the Heritage Foundation. A group that is all about putting people that are behind the most powerful interests in this country on the United States Supreme Court,” Smith said. “And what has the President said about this nominee. He has said that he will absolutely put somebody on the Supreme Court who he is sure will tear down Roe vs Wade.”

As a member of the House, Ellison won’t have a vote on the nomination, but as deputy chair of the Democratic Party will play a role in how the organization responds: “Don’t you think for a minute that we cannot defeat this right-wing, reactionary, so-called Justice Kavanaugh. We can beat him too.”