After remaining silent for more than a day, the gubernatorial campaign of Attorney General Lori Swanson and U.S. Rep. Rick Nolan has responded to a MinnPost report that Nolan hired on his 2016 campaign a longtime aide who left his congressional office in 2015 due to allegations of sexual harassment.

On Friday, Swanson’s rivals in the DFL primary, state Rep. Erin Murphy and U.S. Rep Tim Walz, condemned the way Nolan’s office handled the allegations against his longtime friend and legislative director Jim Swiderski, which included groping a 20-year-old intern. Some progressive groups, such as TakeAction Minnesota, called for Nolan, who is running for lieutenant governor, to drop out of the race.

In his most recent statement, released Friday afternoon, Nolan reiterated that “in hindsight,” Swiderski should not have been hired by his 2016 campaign, and apologized to the women his former aide harassed. Nolan, who touted his work on behalf of women during his political career, also apologized for “any insensitive comments I have made.” (MinnPost obtained a recording of Nolan lamenting white-collar workplace norms, saying “a woman’s got every right to be as fragile as she wants.” He also referred to Swiderski as the “boyfriend” of one of the women he harassed.)

In her statement, Swanson praised Nolan’s “long, effective, and distinguished track record representing Minnesota and has fought for gender equality throughout his entire career.”

Swanson’s campaign spokesperson accused the women who talked to MinnPost of being motivated by politics, since one of them currently works on behalf of a candidate who is running against Swanson and Nolan in the upcoming DFL gubernatorial primary.

On Friday afternoon, members of progressive groups TakeAction Minnesota, OutFront Minnesota, the DFL Feminist Caucus, plus the Land Stewardship Project and Our Saviour’s Lutheran Church in Minneapolis spoke at a press conference at the State Capitol to denounce Nolan’s action with regard to Swiderski.

“Congressman Nolan has a choice to make in this moment,” said Elianne Farhat, the program director for TakeAction, which has endorsed Swanson’s opponent, DFL Rep. Erin Murphy, in the race for governor. “He is choosing to do nothing. He chose to do nothing when women came to him in his office. Congressman Nolan is making the wrong choice and he is the wrong choice for Minnesota. It is time for him to step down.”

MinnPost spoke to three former staffers for Nolan who accuse Swiderski of sexually harassing them. When staffers raised allegations against Swiderski in the spring of 2015, Nolan and his most senior aides allowed the legislative director to resign rather than face formal disciplinary consequences. 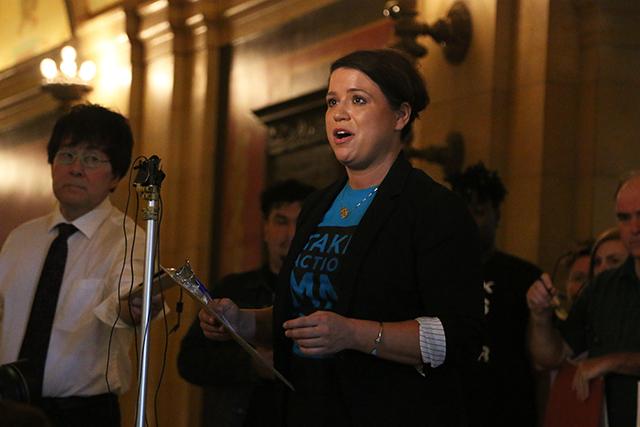 MinnPost photo by Greta Kaul
“Congressman Nolan has a choice to make in this moment,” said Elianne Farhat, the program director for TakeAction.

Months later, Nolan’s campaign hired Swiderski to do work for the congressman. When Nolan staffers found out, they complained to campaign manager Joe Radinovich, who then fired Swiderski.

Though it’s too late for Nolan’s name to be dropped from the primary ballot, “That does not mean that Lori Swanson cannot take dramatic and decisive action and clearly communicate the path forward for her ticket,” Farhat said.

Aldona Martinka, the chair of the DFL Feminist Caucus said she hoped Swanson would make a statement that explicitly condemned Nolan’s behavior.

“I would like to see statements talking about how awful this is and denouncing the actions and lack of actions in her running mate’s office,” she said.

The DFL Party Stonewall Caucus, which represents LGBT interests, also called on Nolan to drop out of the race, saying in a Facebook post that it “expect[s] [Swanson] to hold her running mate accountable, and to set a positive example for the kind of behavior DFLers will and won’t accept, within our campaigns and in governance.”

Some progressive advocacy groups issued statements condemning Nolan’s handling of harassment allegations but did not explicitly call on him to drop out of the race. Abortion rights group NARAL Pro-Choice Minnesota, which endorsed Murphy in the governor’s race, said Swanson and Nolan should denounce this “disgusting and unacceptable behavior.”

The governor’s field responds to allegations

On Friday, Swanson’s rivals for the DFL gubernatorial nomination made their first public statements about Nolan’s handling of the sexual harassment allegations against his former legislative director.

Murphy, the party’s endorsed candidate, said that Nolan “enabled a predator while engaging in truly reprehensible behavior himself.” Prior to Swanson’s statement Friday afternoon, Murphy had called out Swanson for remaining silent on the story: “Engaging in sexual harassment or sexual assault — or sweeping it under the rug — is unacceptable,” she said. 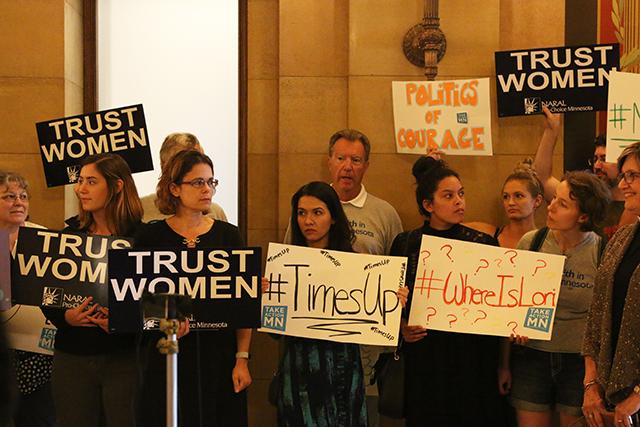 MinnPost photo by Greta Kaul
On Friday afternoon, members of progressive groups TakeAction Minnesota, OutFront Minnesota, the DFL Feminist Caucus, plus the Land Stewardship Project and Our Saviour’s Lutheran Church in Minneapolis spoke at a press conference at the State Capitol to denounce Nolan’s actions with regard to Swiderski.

Walz, Nolan’s colleague in the Minnesota congressional delegation, also issued a statement, calling what happened in Nolan’s office an “inexcusable failure of leadership.”

“This type of behavior would not be tolerated in a Walz-Flanagan Administration,” he said. “I’ve called on our Republican opponents to break their silence on important issues before, and I’m calling for the same leadership from Attorney General Lori Swanson now.”

By Sam Brodey and Greta Kaul