The southern Minnesota native served four terms as the Ramsey County attorney from 1978 to 1995. He ran for the U.S. Senate in 1994, was Doug Johnson’s lieutenant governor pick in 1998 and ran for Congress from the 4th district in 2000.

Amidst all that he was vice chair of the National Indian Gaming Commission under President Bill Clinton, acting Washington County attorney, deputy corrections commissioner under Gov. Rudy Perpich, and the state’s lobbyist in Washington, D.C., in Gov. Jesse Ventura’s administration.

His name, however, might not be as familiar to younger voters since he has spent much of the last two decades in private practice in St. Paul, a name identification gap he’ll have to overcome as one of five DFL candidates for attorney general in the Aug. 14 primary.

Foley said he’ll differentiate himself from the others by talking about the legal and administrative skills required to run what is the state’s largest public legal office, skills he said he gained as a county attorney.

“I’m the only candidate who has the breadth of experience and the track record to direct an office of that size and complexity,” Foley said in an interview last week. “I know the attorney general’s office. I know how a public law office has to run.”

Foley was the last to file for the office on a frantic final day of filing, following former state Commerce Commissioner Mike Rothman, U.S. Rep. Keith Ellison, state Rep. Debra Hilstrom and endorsed DFL candidate Matt Pelikan. Like the others, Foley has his own story of making a decision to run on short notice once incumbent Lori Swanson decided to shift her efforts toward the governor’s race. That came just two days after she failed to win a first-ballot endorsement from the state DFL convention and 27 hours before the deadline to file for the Aug. 14 primary.

Foley said he hadn’t planned to run until he saw what happened at the Rochester convention. Even after Swanson withdrew her name from consideration for the endorsement, Foley said he wasn’t going to run. That changed, however, when the convention endorsed Pelikan.

“I wasn’t thinking of it until the party endorsed another candidate who I didn’t think qualified for the depth of experience needed to run the attorney general’s office,” Foley said. Calls from friends and associates asked him to take a look, he said.

The attorney general offices around the country have taken on an increased profile as the elected officials most likely to challenge presidential actions — first from Republicans against President Barack Obama and now as Democrats challenge President Donald Trump. Democratic AGs have led legal battles on the travel ban, new citizenship questions on the Census and the separation of families at the border. 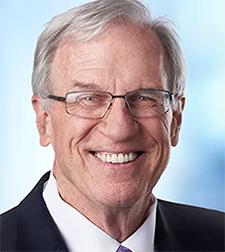 Foley is critical of candidates who he thinks will make such cases too much of their mission.

“The attorney general’s office needs to focus on Minnesota and Minnesota priorities,” Foley said. “My focus is not to blindly attack the Trump administration. If there are some policies and laws that violate what I think Minnesota citizens need, I certainly think there’s a role for the attorney general to step up as other attorneys general have and sue the federal government. I think they’re totally within their right looking at the DACA program, the separation of families.”

But with an eye on Ellison, Foley said: “I don’t think it is the job of the attorney general to just attack the Trump administration. I think that’s a waste of resources. I would be very selective in the types of cases I would take on.”

He said there are other important actions that don’t involve suing the federal government — issues such as the opioid crisis, safe schools and sex trafficking that are mostly private-sector actions.

“Certainly there is a place for being involved nationally, but I don’t think that’s the primary focus of the Minnesota attorney general.” Foley notes that as part of the Alliance for Tribal Justice, he has helped a coalition of 34 Indian tribes and 20 rural clinics sue drug makers for the harms caused by opioids.

“Others have been talking about it,” he said, “I’ve been doing it.”

Foley was complimentary of the office as it has been run by Swanson for nearly 12 years. “Like any large organization there are personality issues. But from a legal perspective, the lawyers have been very solid, they give good legal advice to the 100-plus state agencies and commissions.” Foley said he had worked for the attorney general early in his legal career in the criminal division trying felonies including murders around the state.

He said he supported Swanson’s decision to concentrate her efforts on suing makers of opioid painkillers in state court under state law. That will be in addition to lawsuits in federal court now consolidated in Cleveland.

“I don’t think the office should be outwardly political in terms of blindly making political statements,” he said. “You’re mostly a legal office. And when the political and legal come together there are times you have to state independence and provide the effective leadership the job requires.”

Foley said he grew up in Wabasha, Rochester, Austin and Albert Lee, the son of a judge and the grandson of a Wabasha County attorney. He said he worked as a union meatpacker at a Hormel plant in Austin to help pay for college and law school, both at the University of Minnesota.

He won his first elective office in 1977, winning the Ramsey County attorney job.

“In that job I championed and initiated a number of programs,” he said, citing the first family violence section, aggressive prosecution of child abuse cases, and starting the victim/witness program prosecuting clergy abuse “before anyone even knew there was clergy abuse going on around the United States.” That was the prosecution of a priest named Gilbert J. Gustafson in 1982.

Foley said he argued one of the first hate crime cases before the U.S. Supreme Court —  R.A.V. vs. St. Paul. The top court ruled 9-0 that the city ordinance was overbroad, a ruling Foley disagrees with; he says subsequent case law is more supportive.

He said he promoted women lawyers to leadership positions before it was common in public law, mentioning the first women to serve in the position of first assistant county attorney — Sue Haigh and Susan Gaertner. Haigh later was a Ramsey County commissioner and is a former Metropolitan Council chair. Gaertner succeeded Foley as county attorney and later ran for governor in 2010. Foley said he would emphasize recruiting a new generation of young lawyers with an emphasis on diversity.

“I think in government service you’re given a lot more responsibility at an earlier age than many law firms give you in the private sector. If you have major cases that your office is leading on and championing, people want to work for you and will seek you out.”

Several of his opponents say they want to be “the people’s attorney.” Does Foley?

He called it a political slogan “that sounds good but is somewhat misleading for what you are actually doing. You are the lawyer for the state, the state commissions, the governor, the other state constitutional offices. But you also represent the people. How do I protect the people who are being ravaged by opioids epidemic?”

“In essence I am taking on litigation that affects a lot of people, particularly in rural Minnesota and indian reservations that have been devastated by this,” Foley said. “You’re kind of both. But saying you’re the people’s lawyer is a nice slogan but I don’t think it really states what the job of attorney general is.”

Foley was not a candidate for the office in time to report campaign finances to the state.  The next filing deadline in July 30.