Who was more surprised by the results of the Minnesota GOP primary for governor than former Gov. Tim Pawlenty? How about the state DFL.

As U.S. Rep. Tim Walz and state Rep. Peggy Flanagan were winning an easier-than-expected victory over two rival teams for the DFL nod, they saw the man they’d been targeting for months fail to win the nomination.

Instead, Walz and Flanagan will run to November against Hennepin County Commissioner Johnson and his running mate, Donna Bergstrom, of Duluth. Johnson guessed correctly that the GOP base is solidly in support of President Donald Trump and that he could win by pointing out Pawlenty’s un-endorsement of Trump during the 2016 campaign and his lukewarm support since.

It wasn’t close. From the first returns to the last, Johnson carried a better-than 8 percent lead over the two-term governor.

On the DFL side, Walz had a nearly 10 percentage point lead over DFL-endorsed candidate Erin Murphy and an 18 percent lead over Attorney General Lori Swanson. Walz was slightly behind or tied with Swanson in the few public opinion polls released before the election but rode a combined majority in the most populous Hennepin and Ramsey counties — and a much stronger showing in Greater Minnesota — to an easy win.

The former school teacher from Mankato had more money and support from better funded independent expenditure campaigns. But Murphy, especially, tried to portray him as not progressive enough for Twin Cities DFLers, given pointed attention to Walz’s former support of the NRA and its support of him.

It didn’t matter. Walz sold himself as the candidate who could do what the DFL needs to do: regain some of its support outside the Twin Cities.

Johnson, however, was the surprise of the evening. After thanking supporters for helping him win, he described the primary as another hurdle. “And now we’ve got through hill number two and it was a dang big hill, folks,” Johnson said of the primary election. Now, “We have to win in November.”

“Donna and I are going to wake up every single morning after this election to change the culture in St. Paul — from that of controlling and directing and telling everybody else how to live their lives — to actually serving the people who pay their salaries,” he said of himself and Bergstrom.

On the walls of the Lucky’s 13 Pub in Plymouth were signs reading “Overthrow the Status Quo.” Pawlenty was treated as being part of that status quo. Some chanted “Go home, Tim Pawlenty.”

Johnson was badly outraised and outspent by Pawlenty. But despite big leads in early polls, Pawlenty couldn’t shake Johnson and aired ads that criticised his opponent for overstating his own conservative credentials. He was still running ads against Johnson on Tuesday afternoon.

Republican Party Chairwoman Jennifer Carnahan said money didn’t always matter. “It’s not always about who has more money … it’s who can make that personal connection and demonstrate their values align with the voters,” she said.

How sure was the DFL that Tim Pawlenty would be their opponent this fall?

Walz and Murphy often used Pawlenty’s name as a convenient applause line in speeches, knowing how disliked Pawlenty was not only for the tight budgets he presided over during the Great Recession but his more recent attempts to raise the issues of illegal immigration and refugee resettlement.

The largest DFL-leaning independent expenditure campaign — the Alliance for a Better Minnesota — had already been running TV ads as part of a “Meet Tim Pawlenty” campaign, paid for by fundraising totaling $4.2 million.

Not that there weren’t cheers among the supporters at the Walz party whenever election returns were projected showing Pawlenty’s troubles. Part of that could be the sense that Johnson will have more difficulty pivoting to a general election campaign that can appeal to independents. But for now, Walz and running mate Peggy Flanagan have to do their own pivoting. Flanagan made reference to the “Pawlenty-Johnson Era” and Walz sent a somewhat backhanded congratulations to Johnson.

“We’ve got 84 days to the general election, and let’s be honest, it didn’t matter who they picked on the other side because the divisive message will stay the same,” Walz said in his acceptance speech at the Carpenter’s Hall in St. Paul. “I’ll send my first message to the other side: I congratulate Jeff Johnson on winning, but there’s just a few things he needs to know: This veteran walks proudly in my progressive values, this teacher stands up to bullies, this coach builds championship teams, and … this governor won’t back down.” 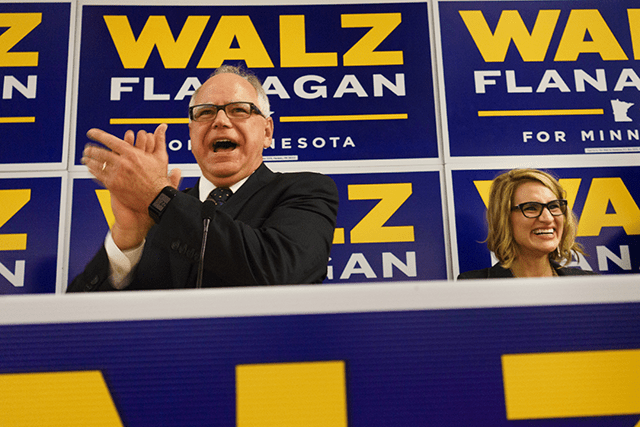 For their part, the Alliance for a Better Minnesota took some credit for Pawlenty’s loss and quickly took after Johnson. “Minnesotans, including Republican primary voters, soundly said no to another four years of Tim Pawlenty after we reminded them of his harmful record as governor,” said Executive Director Joe Davis in a statement. “But Jeff Johnson’s record isn’t any better ….”

Murphy was less well-funded than Walz and even Swanson, who only began her campaign in early June after shifting from what was likely an easy re-election as attorney general. But her strength was in the party’s progressive wing, winning support from TakeAction Minnesota, the public employee unions and Our Revolution, the successor organization to the Bernie Sanders presidential campaign.

But she did not do as well in the Twin Cities as she needed to, and her support elsewhere in the state did not measure up to Walz’s. She took some credit for the way her campaign energized new voters and offered to help shift that support to Walz.

Swanson was handicapped by a late start and is a proven vote-getter statewide, having won three times. And her selection of U.S. Rep. Rick Nolan was seen as giving her an edge in Greater Minnesota, especially in his 8th Congressional District.

She led in early polls and was even with Walz in an Emerson University poll that was in the field right up to the primary. Yet two news reports hurt. The first was a MinnPost story about how Nolan mishandled allegation of sexual harassment by a trusted aide. The second, first published by The Intercept, reported how her attorney general’s office staff felt pressure to do campaign and political work on her behalf.

Her concession Tuesday was complimentary of both Murphy and Walz, whom she declared the next governor of the state of Minnesota.

T-paw: ‘We gave it our best effort’

Pawlenty had everything he needed to stage a comeback — name familiarity with voters statewide, plenty of money, a national fundraising base and a large and professional organization. What he lacked, however, was support among the party base that can dominate lower-turnout primaries. That base is more with Trump and his supporters than with Republicans like Pawlenty.

“I do not regret trying to come back to this office and help lead and serve this state,” Pawlenty told a crowd of about 50 supporters who had gathered at Granite City Food and Brewery in Eagan. “We gave it our best effort.”

To those asking the former governor what Republicans’ preference for Johnson means, he said, “I think the circumstances we live in, in the era of a different kind of leadership, in terms of President Trump and the like, I just don’t fit well into that era. The baton gets passed to Jeff and his team and we wish the Republican Party well and we hope for a great result for them come November.” 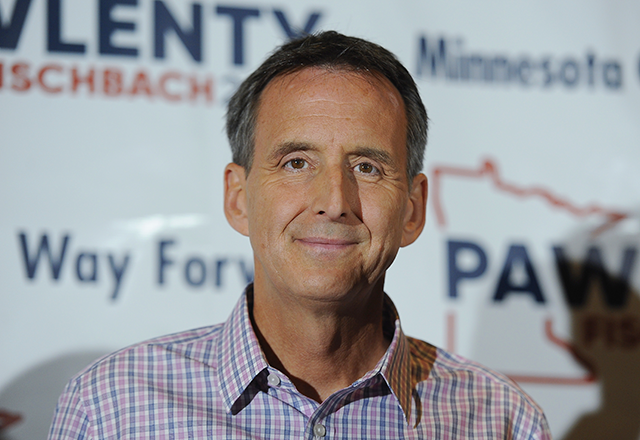 MinnPost photo by Craig Lassig
Tim Pawlenty addressing supporters who had gathered at Granite City Food and Brewery in Eagan: “We gave it our best effort.”

Johnson was badly outraised and outspent by Pawlenty. But despite big leads in early polls, Pawlenty couldn’t shake Johnson and aired ads that criticised his opponent for overstating his own conservative credentials. He was still running ads against Johnson on Tuesday afternoon.

One political fact was noted by Flanagan Tuesday night: that whichever ticket wins in November will produce the state’s first Native American lieutenant governor. Flanagan is a member of the White Earth Nation of Ojibwe; Bergstrom is a member of the Red Lake Nation. “So, Donna Bergstrom?” Flanagan said. “Here we go, Sister.”

Jessica Lee also contributed to the reporting of this story.

After victory over Pawlenty, Johnson set to face Walz in governor’s race