Minnesotans voted in a slate of primaries on Tuesday with significant implications for the battle for control of Congress this fall. In the closest-watched races, a U.S. Senate primary and three U.S. House primaries — two of which had fields of five candidates each and no clear favorites — many observers expected razor-thin margins and a long night checking election returns.

The Senate portion of the ticket wrapped up early, with DFL Sen. Tina Smith — who was appointed to the seat by Gov. Mark Dayton after Al Franken resigned in January — easily beating back a challenge from former George W. Bush ethics lawyer Richard Painter. Painter’s candidacy, which ran on buzz generated by social media and cable TV, was seen as something of a dark horse, and observers had been surprised with his effort. But within an hour of polls closing, the Associated Press had called the race for Smith, who notched over 75 percent of the vote; Painter never got past 15 percent.

On the Republican side, state Sen. Karin Housley, a heavy favorite, defeated businessman Bob Anderson 62 percent to 35 percent, with nearly all precincts reporting. That race was also called within the first hour of polls closing.

In Minnesota’s 1st and 8th Congressional Districts — which are poised to rank among the most expensive and competitive House races in the country this year — two candidates with broad backing from their respective parties emerged victorious. In the 1st, which encompasses 21 counties in southern Minnesota, endorsed candidate Jim Hagedorn defeated state Sen. Carla Nelson, 60 percent to 32 percent, with nearly all precincts reporting.

Hagedorn, who is making his fourth run for the CD1 seat after narrowly losing to Rep. Tim Walz in 2016, was favored over Nelson, a veteran legislator who was endorsed by the National Rifle Association. After his double-digit win tonight, Hagedorn moves on to a general election match with Democrat Dan Feehan, a former Barack Obama official who easily won a primary over a little-known challenger. The 1st District narrowly went for Obama in 2012 before swinging decisively to Donald Trump in 2016, and is high on both parties’ priority lists in these midterms.

In the 8th District, which spans an area of northern Minnesota from Duluth and the Iron Range to northern Twin Cities exurbs and the Brainerd Lakes, Democrat Joe Radinovich stood out in a field of five DFL candidates. The former state legislator from Crosby, who managed the successful 2016 campaign of retiring Rep. Rick Nolan, took 43 percent of the vote, with former TV journalist Michelle Lee in second with 28 percent, with over 90 percent of CD8 precincts reporting. North Branch Mayor Kirsten Kennedy and state Rep. Jason Metsa notched 12 percent each. 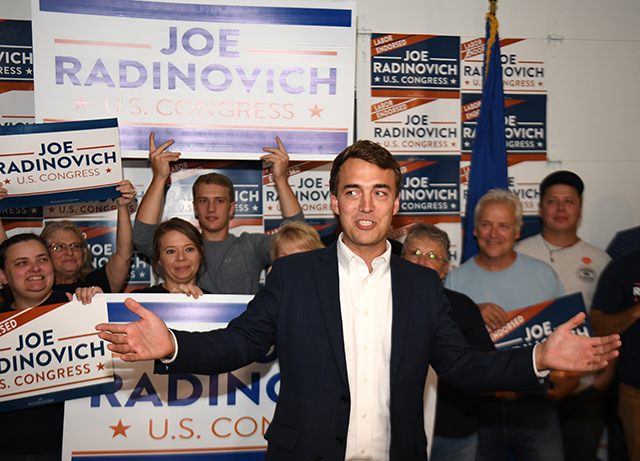 Radinovich will take on Republican Pete Stauber, a favorite of President Donald Trump’s who easily dispatched a primary challenger on Tuesday, in the general election for the seat, a longtime DFL stronghold that the president won by 15 points in 2016.

At his victory party in Brainerd, Radinovich said the tough primary has prepared his campaign to win in November. He went on to hit Stauber, calling him a rubber stamp for Trump policies on tax cuts and health care. “The last thing our district needs is a representative blinded by party loyalty who will be beholden to big corporations instead of the people standing in rooms like this,” he said. “The last thing our district needs is Pete Stauber in Washington, D.C.!”

Tuesday night, Stauber wasted no time in trying to label Radinovich. In a statement, his campaign called the former state legislator, “a career politician that recently moved here from Minneapolis to advance his own political ambitions, who wants to impose the largest tax increase in American history to pay for his 33 trillion dollar health care scheme.”

But in an interview at Stauber’s campaign headquarters in Hermantown shortly before Radinovich was declared the DFL primary winner, Stauber was more measured. “I think every candidate has great qualities,” he said. “They have good qualities, there’s no doubt about it. It’s about the issues and what they believe and how they believe in governance – how much government should be involved in our lives.” 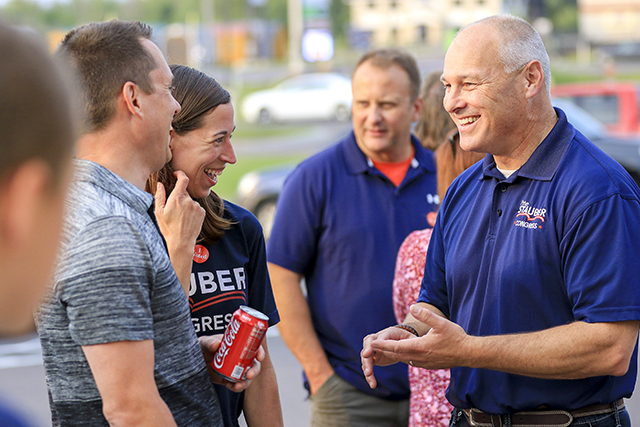 Anticipating criticism from Democrats that he will be a rubber stamp for Trump, Stauber said, “I’m my own person. I will not blindly follow any elected official. What I will do is work to better Minnesota eight.”

Stauber said he expected to engage in debates with Radinovich sometime over the next ten weeks before the November election.

Another historic win for Omar

In Minnesota’s 5th District, by far the state’s most heavily Democratic, state Rep. Ilhan Omar won decisively in a crowded DFL primary to succeed incumbent Rep. Keith Ellison. She took over 48 percent of the vote, with former Minnesota House Speaker Margaret Anderson Kelliher coming in a distant second with 30 percent of the vote. State Sen. Patricia Torres Ray came in third, with 13 percent.

Thanks to overwhelming DFL numbers in the district, Omar — the first Somali woman to be elected to office in the U.S. — is a safe bet to be CD5’s next member of Congress. Along with Michigan’s Rashida Tlaib, who won a primary of her own last week, Omar is expected to be among the first Muslim women ever to serve in Congress.

Surrounded by supporters at her victory party at south Minneapolis’ Safari Restaurant, Omar invoked her historic surprise win two years ago for the House District 60B seat. “I’m more than excited that we’re gathered here to make another history, because we’re going to Washington,” Omar said.

Cyndy Brucato and Ibrahim Hirsi contributed to this report.

Congress: Omar expected to become one of the first Muslim women to serve in U.S. House; Smith and Housley to face off for Senate seat