One of the members of the DFL’s central committee who voted to endorse Keith Ellison for attorney general Saturday said his decision was both personal and political.

Joel Heller, an Iraq war veteran from Duluth, said descriptions of domestic violence like those given by Ellison’s former girlfriend Karen Monahan remind him of abuse he suffered as a child. “The triggers hit,” Heller said.

Heller said he cried when Ellison addressed the DFL’s executive committee Saturday, and said that he asked Ellison three different times during the course of the morning whether he was telling the truth in denying allegations brought forth by a former Ellison girlfriend, Karen Monahan. “When someone comes up to you and they look you straight in the face, when they say, ‘Hey, I didn’t do it,’ you’ve got to take a person’s word,” Heller said.

But Heller said he knows the consequences if it turns out that he and the party put trust in Ellison that he didn’t deserve. “If he doesn’t tell the truth, not only is he going to be branded a liar now, he’s going to branded a liar for years and years to come,” Heller said. “We put faith in this person and that’s all we’ve got is faith. If he breaks our faith right now, it’s going to devastate the party. The Republicans are going to cream us in November if that happens.”

Ellison arrived early at Cambridge-Isanti High School in Cambridge for Saturday’s semi-annual meeting. Before speaking to the 400 or so DFLers who make up the party’s central committee, he also made appeals to the executive committee as well as the DFL veterans caucus.

“I want you to know that I take what has happened in the past week extremely seriously,” he told the gathering. He said wanted to tell committee members “face-to-face” that he never abused Monahan, whom he referred to by her first name. “Despite everything, I still care about her as a person and I don’t want anybody to say anything insulting to her at all.”

Ellison raised the specter of GOP nominee Doug Wardlow winning the election, and described how he would fight for consumers and against special interests. He also repeated what he has said throughout his primary campaign: that he would be active in challenging policies of the Trump administration. “If you will stick with me in this moment, I promise I will be that attorney general,” Ellison said.

By a vote of 326-70, the central committee conferred the endorsement on Ellison, a margin that far exceeded the 60 percent required. (The process was made necessary not because of the allegations that broke a week ago but because the party’s previously endorsed candidate — Matt Pelikan — didn’t survive the primary.)

Nothing that happened at the meeting would have kept Ellison off the ballot in November, when his name and party label will appear, though the endorsement does bring with it some organizational help: specifically, the use of mailing lists and the appearance on party sample ballots. Not endorsing Ellison, though — one of the state’s most-prominent African-American politicians and someone whose voter registration and get-out-the-vote efforts in previous elections have been major assets for the party — would have been startling.

But what normally would have be routine — the vote to endorse Tim Walz for governor and Peggy Flanagan for lieutenant governor was quick and celebratory — was anything but. Just one week before, Karen Monahan’s son, Austin Monahan, wrote on Facebook that Ellison had been abusive to his mother before the two split up in 2016.

Ellison has denied the abuse, while Monahan has supported her son’s decision to name Ellison. She has released messages between the two and said in interviews that she was a victim of “narcissist abuse” by Ellison. But the most concerned allegation — that Monahan says she has phone video of — involved a fight at Ellison’s home during which she says he grabbed her by the ankles and tried to yank her off a bed while cursing at her.

‘DFLers will get through this’

Citing intense media interest in the story, a central committee member proposed conducting the vote via paper ballot so committee members could “feel free to vote their conscience.”

Members did have to sign those ballots for them to be counted. Once counted, the vote was 326 in favor of the endorsement and 70 preferring no endorsement: 82 percent to 18 percent.

No speeches were allowed before the vote, but questions were asked: Could the party undo an endorsement later? Yes, but it would require another meeting of the central committee, something DFL Chairman Ken Martin said was unlikely. Would there be multiple ballots should Ellison not clear the 60 percent threshold? No. Could they put off this decision until more information is in hand? Yes, but it would take another meeting and Martin said he would prefer committee members spend their time in the weeks before the general election helping elect Democrats. 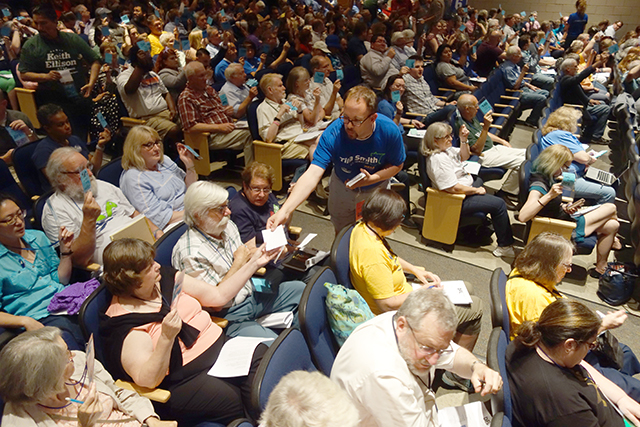 After announcing the vote, Martin said Ellison had left to fly to Detroit for his father’s 90th birthday celebration. “I know I can probably speak for him by saying, ‘Thank you,’” Martin said. “Our party’s going to do everything we can to help Keith and the other candidates on the ballot. I know this was a tough day. I know for me and others it triggered a lot of emotions. But DFLers will get through this. We’ve worked through the tough things.”

But no one thinks the vote Saturday puts the issue behind Ellison or the party. Monahan sat for an interview with CBS News last week and continues to talk about her relationship on social media. Republicans are also keeping the issue front and center in the campaign. A dozen people stood across from the auditorium entrance Saturday with signs that included: “Why would you vote for Keith Ellison? Beats Me!”

Wardlow issued a statement shortly after news of the DFL endorsement was announced. “Minnesota Democrats have preached that we must believe domestic violence victims. That is, until it is one of their own,” Wardlow stated. “This endorsement is not only disturbing, but it goes to show that they will put politics above all.”

He also called on national Democrats and Vermont Sen. Bernie Sanders to rebuke their endorsements of Ellison. “They should stand with the victims, not Keith Ellison,” he said.

On Monday, Politico reported that the Congressional Leadership Fund — a super PAC set up to protect GOP control of the House — is running ads in Minnesota’s 1st, 2nd, 3rd and 8th congressional districts that criticize Democratic nominees for not joining the National Organization for Women’s call that Ellison drop out of the AG race.

The DFL’s risky, inevitable endorsement of Keith Ellison: ‘If he breaks our faith right now, it’s going to devastate the party’