Jeff Johnson must have felt he’d paid his dues.

In 2014, when the odds of beating incumbent Gov. Mark Dayton were slim, Johnson carried the Republican banner and engaged the DFLer in a general election that — while not all that close — was at least respectable.

As it became clear that Dayton would step down after two terms and an open office would be on the ballot, the 10-year Hennepin County commissioner had a clearer shot. Through the winter and spring, others with the same idea came and went: former state party chair Keith Downey, state Sens. Matt Dean and Dave Osmek, Ramsey County Commissioner Blake Hoffman. The last, Woodbury Mayor Mary Giuliani Stephens, dropped out after Johnson secured the state GOP endorsement in early June.

But Johnson’s endorsement — as well as his path to November — was clouded by someone not in the hall at the state GOP convention in Duluth. After months of clever consideration that milked as much “earned” media as possible, the potential Tim Pawlenty comeback was replaced by the actual Pawlenty comeback. Now Johnson is at risk of finishing second, again, this time in his own party.

Pawlenty is seen by the party establishment — at least based on financial support — as having the best chance of winning a statewide election and returning the governor’s mansion to GOP hands since, well, since the last time he was governor, from 2003 to 2011. Pawlenty himself claimed that he had been willing to let another candidate take the lead if they showed they could win.

“This is a tough race in the best of years for Republicans in a tough state and we need to have our A team on the field,” Pawlenty said shortly after announcing his candidacy. “I haven’t seen that from the other candidates in the field.”

Johnson seems undeterred. He’ll be outspent by Pawlenty. The pre-primary reports filed last week with the state Campaign Finance Board showed Pawlenty with $2.1 million raised and $1.023 million in the bank. Johnson, in turn, reported $565,000 with $193,000 left to spend. Independent expenditure campaigns backing each candidate are spending hundreds of thousands more.

Johnson has put his focus on appealing first to the party’s core voters — its conservative base — and worrying about the general election later. If the primary electorate is dominated by that base, Johnson thinks he has a shot to win on Aug. 14. His campaign, therefore, has focused on showing that he, and not Pawlenty, is the true conservative.

In a message to supporters titled “Never Surrender,” Johnson writes that “sometimes it seems like elected Republicans in Minnesota have given up.” They talk about conservative governing while campaigning, he wrote, but then make compromises once elected. “That’s not victory; that’s surrender,” he wrote.

In other settings, he touches on conservative hot buttons by talking about Pawlenty’s time as governor: how he didn’t block light rail transit in the Twin Cities; how he signed budgets with increased spending; how he pushed for green energy standards and partially adopted the Common Core State Standards Initiative.

“Tim had his chance and he blew it,” Johnson said in one ad.

Setting himself up as the outsider began with one of Johnson’s first pieces of campaign communications: a video showing a jeans-wearing Johnson crashing a soiree at the governor’s mansion where tuxedo-and-gown-wearing guests graze on “seaweed bean curd,” “hot tofu sliders” and, of course, caviar.

But that is a general election message. Johnson has since turned his attention to Pawlenty.

Front-runners don’t usually feel the need to engage their opponents. Debates are more a risk than a benefit. Pawlenty has followed that path, agreeing to just three public forums — one on MPR, another on KSTP, and a third on a stage shared with DFLers at FarmFest.

He hasn’t ignored his opponent completely, though. In July, he debuted an ad titled “the Real Jeff Johnson” that questioned Johnson’s conservative bona fides. And he has been aggressive in media forums, terming Johnson a “poser” who talks about conservative principles but doesn’t act on them when given a chance as both a legislator and county commissioner.

In one ad, he attacked Johnson for a proposed property tax increase in Hennepin County — without including one critical detail: that Johnson was trying to head off a larger increase pushed by the DFL majority that controls the county board.

“Jeff has held himself out as almost the perfect conservative, and there are some things in his record that show that’s not always the case,” Pawlenty said during the KTSP forum. “As he criticises me for not being sufficiently conservative, he’s got some things in his record that suggests that also. As he nitpicks my record, then I think it is fair to nitpick his,” Pawlenty said. 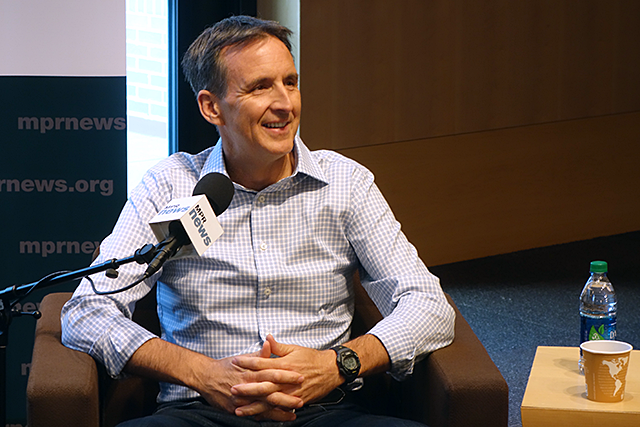 MinnPost photo by Peter Callaghan
Tim Pawlenty has raised enough money he can take a shot at Johnson now and have more than enough resources to wage a general election campaign later.

In that forum, they also engaged in language more common in marriage counseling than in political debates, i.e. I feel like I don’t even know you anymore.

“You’re not the Tim I helped win in 2002 because that Tim would not be so dishonest,” Johnson said.

Replied Pawlenty: “The Jeff that I know wouldn’t have said from Day One, before we even launched that ad, all the attacks you’ve laid on to me.”

Johnson was unhappy with the ad, though he took some delight in getting the former governor’s attention. That must mean he’s closing in, Johnson said after the ad began running. While the few polls that have been released don’t indicate that, front-runners in GOP primaries in other states have been surprised by surges by opponents they disregarded. And Pawlenty has raised enough money he can take a shot at Johnson now and have more than enough resources to wage a general election campaign later.

Pawlenty has tried to point out the differences between talking about governing and actually governing. He not only criticises Johnson for not taking on some of the issues he complains about now — such as never introducing a bill while in the Legislature to restrict the Met Council or halt light rail funding — he defends his own eight years in office.

“If you are a conservative leader, you actually have to do something. You have to do more than take up space,” Pawlenty told Johnson during the MPR forum. “If you look at my record as governor of the state of Minnesota, it’s a common-sense conservative record. Anybody who looks at it fairly will reach that conclusion.”

Pawlenty left the office after two terms for a brief attempt at winning the GOP presidential nomination in 2012. He has since been the CEO of the Financial Services Roundtable, the lobbying arm of the banking industry.

The GOP primary was always going to be about who was the better representative of the party’s conservative core. But it’s a political truism, mostly because it tends to be true, that candidates in contested GOP primaries run toward the right in the primary and then cant to the middle in the general election. But because he needs a strong showing among Minnesota’s most conservative voters in the primary, Johnson has left himself little room for that.

Johnson has not only fully embraced Donald Trump but attacks Pawlenty for not being sufficiently loyal to the president. This is despite the fact that Trump was Johnson’s third choice for president in 2016, having first endorsed Marco Rubio and then Ted Cruz. Johnson argues that he has misgivings about Trump but voted for him. Pawlenty, who withdrew his endorsement after the “Access Hollywood” video came to light and called Trump “unfit,” had already voted for Trump by absentee ballot. Johnson, however, alleges Pawlenty either encouraged a vote for Democrat Hillary Clinton or suggested Republicans not vote at all. At the KSTP forum, both candidates said they would welcome a Trump endorsement and Trump campaign visits in the general election.

Still, for a few more days, Pawlenty will be accused of not being conservative enough during his eight years in office. Should Pawlenty survive the primary, however, he will surely face charges from the DFL nominee — similar to those already being aired by independent expenditure campaigns — that he is far too conservative for the state.

For all the squabbling, on the issues Johnson and Pawlenty are far more similar than they are different. Both support mining projects being proposed on the Iron Range. Both men call for more school accountability in return for increases in funding. And both said they consider additional light rail projects to be wasteful and not effective.

Another place the two Republicans don’t diverge: immigration and refugee resettlement. Both support cracking down on illegal immigration, and Johnson has called for a suspension of acceptance of refugees under federal resettlement programs. Both have claimed they are bucking political correctness by raising the issues; Johnson has even complained that even talking about it has exposed him and those who share his views to charges of racism and white supremacy.

Unlike Johnson, Pawlenty has left himself some wiggle room to take post-primary positions that might appeal to some in the middle of the political spectrum. He’s not going to carry south Minneapolis, but he might get votes in first-ring suburbs with a slightly less-absolutist position on gun safety (including a ban on bump stocks; a voluntary use of background check system for non-licensed gun dealers; and court-imposed ban on gun possession by those with mental illness). He’s also called for opioid manufacturers to pay to solve the addiction epidemic he said they helped create.

Their closing comments from the MPR forum provide a good summary of how they view their own candidacies. “If you are looking for fundamental change to government, if you are looking to change the culture in our state government — particularly in our state agencies — from one of controlling, directing and telling everybody how to live their lives or farm their land or run their business, I am the candidate you prefer,” Johnson said.

GOP governor primary may come down to who’s a better, truer, Trump-ier conservative