Insiders call them “borrowed ground” or even “rented districts.”

They are the dozen or so Minnesota state House districts carried by Hillary Clinton two years ago but narrowly won by Republicans lawmakers in the same election. Now they are the focus of both parties’ attempts to control the body.

With an open governor’s seat and the state Senate likely to remain in a one-seat GOP majority, the 134 House seats on the November ballot will either give the Republicans complete control of the state Legislature — or ensure that Democrats have a share of power.

Rep. Dario Anselmo, R-Edina, has the distinction of being at the top of DFL’s target list. Anselmo lost the district narrowly to Republican-turned-DFLer Ron Erhardt in 2014, and probably should have lost it by even more in 2016, given that the district went for Clinton by a margin of 27.3 percent over Trump. But Erhardt proved vulnerable, partly due to his own antics on the House floor that included licking a coffee cup while debating a bill that would have made it a crime to put bodily fluids in someone’s food or drink.

This time around, Heather Edelson, also of Edina, is the DFL candidate in District 49A, and the party has already been sending mail into the district attacking Anselmo. The ad is similar to mail pieces that have gone into other targeted districts, and it accuses GOP incumbents of supporting corporate tax breaks while underfunding public schools.

Unlike Anselmo’s, some of the Clinton districts have Republican incumbents with electoral histories that go back further than the 2016 election. Rep. Sarah Anderson, R-Plymouth, has been in District 44A since 2006. Rep. Jenifer Loon, R-Eden Prairie, has represented District 48B since 2008.

The others districts among the Hillary 12 are 33B (Cindy Pugh of Chanhassen), 34B (Dennis Smith of Maple Grove), 42A (Randy Jessup of Shoreview), 52B (Regina Barr of Inver Grove Heights), 53B (Kelly Fenton of Woodbury), 54A (Keith Franke of South St. Paul), 56A Drew Christensen of Savage), 56B (Roz Peterson of Lakeville) and 57B (Anna Wills of Rosemount).

That they are suburban is important to the political dynamics in 2018, just as they were in the previous two House elections. As the DFL has lost some of the outstate districts where it was once competitive, suburban districts have become key to delivering a majority.

The GOP can attribute victories in 2014 and 2016 not just to success in Greater Minnesota but to winning in the suburbs. And DFLers are now counting on the suburban voter — especially suburban women — to carry a dislike for Trump down to the House races. A Suffolk University poll of 500 likely Minnesota voters between August 17 and August 20 found that 55.2 percent had an unfavorable opinion of Trump with 37.8 expressing a favorable opinion. It also found that 46 percent said they “want my vote in November to change the direction President Trump is leading the nation,” while 31.6 percent said they want their vote to support Trump; 18.40 percent said their vote doesn’t have much to do with Trump and his policies.

House DFL Leader Melissa Hortman of Brooklyn Park said she thinks Trump is especially disliked by suburban voters — and increasingly by farmers in Greater Minnesota. She also notes the history of weak performances by a president’s party in the election after their own victory. She tells the story of a pleasant conversation with a voter while door-knocking in 2010. When she asked if she could count on his vote, he said no, he was using the election to send a message to then-President Obama.

Yet she said she cautions her candidates against over relying on predictions of the so-called Blue Wave. In addition to local issues, DFLers are emphasizing helping the middle class get quality schools, affordable healthcare and achieve economic security. “In a way, it’s boring,” Hortman said of those issues. “It’s like fresh-bread and fresh-creamery butter is always good. It was good in the 1860s, and it’s good now.”

If targeting the Hillary 12 was the extent of the DFL strategy, there would be little margin for error. They need to pick-up 11 seats to deny Republicans a third-consecutive legislative term in control of the House. And even that presumes the DFL is able to defend all of the seats it currently holds.

So the party’s target list also includes GOP-held districts that were won by Trump — narrowly — where the DFL has had success in the past. “We know that the last-minute Red Wave made some races really close that should have gone in our favor,” Hortman said. “We have an enlarged map but it is because of the intensity of the energy of DFLers across the state,” something she attributes to frustration with Trump’s victory and a desire to take action. 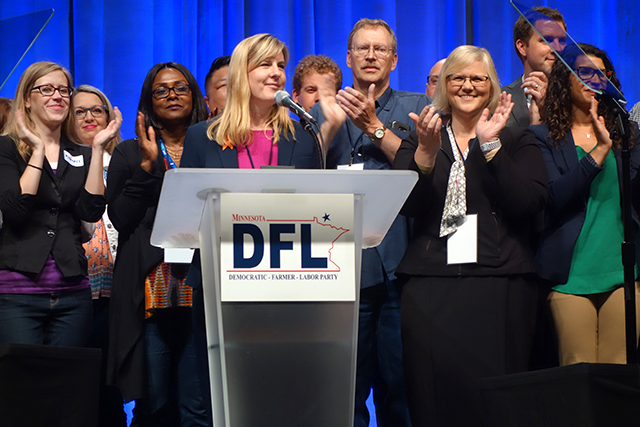 Rep. Jim Knoblach won District 14B, in central Minnesota, by 2 points in 2016 after winning in 2014 by just 60 votes. Trump carried the district by 3.4 percent last election. The DFL has put up Dan Wolgamott for the seat. Wolgamott ran for the area’s Senate seat in 2014, and though he lost, he did best in the half of the district represented by Knoblach.

There are also a handful of seats now held by Republicans who are not seeking reelection. One is in District 36A, where Rep. Mark Uglem, R-Champlin, won in 2016 while Trump carried the district by 0.7 percent. The 2018 matchup is between Republican Bill Maresh of Champlin and DFLer Zach Stephenson of Coon Rapids. Another is 47B, where Joe Hoppe of Chaska is not seeking another term. Republican Greg Boe will face DFLer Donzel Leggett. Trump won there by 2.9 percent in 2016.

A ticket-splitting strategy for the GOP

One of the disadvantages of starting an election cycle with majority control is you have a lot of seats to defend — some of which might be considered rented districts won due to a fortuitous alignment of luck and success at the top of the ballot.

So Republicans start by needing to defend those 12 districts won by Clinton along with several other suburban districts that were close in the 2016 presidential election.

Yet House Speaker Kurt Daudt of Crown argues that GOP success in 2016 wasn’t a fluke, a one-off result of a quirky national election. Rather, he thinks it’s the continuation of a trend. The party won 10 seats in Greater Minnesota in 2014 by narrow margins. Then, in 2016 it expanded its vote margin in all 10 of those districts.  In that same election, it gained six seats — at a time the caucus was expected to lose seats.

This year, Daudt said he also thinks the battle will be in the suburbs and not in those Greater Minnesota seats that were closely contested as recently as four years ago. That is good news and bad news for Republicans, though. While it means the list of targets is more narrow, those suburban districts are where President Trump is most vulnerable.

So the strategy is a tricky, ticket-splitting one. Trump isn’t on the ballot but voters can act on their dislike for him and his policies via congressional elections. But state House races, the GOP hopes, will be about state issues such as taxation, health care and education.

“We’re pretty proud of our record,” Daudt said. “We had a really successful two-year biennium: huge tax cuts; big money for roads and bridges; we actually reduced the cost of health insurance two years in a row after huge increases caused by Obamacare. Maybe that’s why they want to talk about Trump.”

“Minnesotans are ticket-splitters so in areas where they don’t like Trump; we think we can convince folks that they should still support our candidates,” he said. “I’m fully aware that we’ll have somewhat of a headwind this election cycle, but it’s not because of us.”

Daudt called the DFL’s path to a majority “possible but not probable,” and plans to try and make it less probable by going after some of their seats. In fact, if the DFL beats the odds and gains all 12 of the Clinton majority districts, Daudt could still ensure a tie in the House by gaining just two seats now held by the DFL. “We will be on offense,” Daudt said.

If DFLers are starting with the Hillary 12, Republicans might call their target list the Donald 7: districts carried by Trump but won by a DFL House candidate. At the top of that list is Rep. Paul Marquart, DFL-Dilworth, who was first elected in 2000 and who won District 4B by a 54-46 percent spread. Trump carried his district by 21.6 percent. This year, Republicans are challenging Marquart with Jason Peterson of Lake Park.

The other Donald 7 districts are 3A (Rob Ecklund of International Falls), 6A (Julie Sandstede of Hibbing), 6B (an open seat now held by Jason Metsa, who ran for Congress), 19A (open seat now held by Clark Johnson), 27B (Jeanne Poppe of Austin) and 37A (Erin Koegel of Spring Lake Park).

Democrats also have more retirements to deal with — 16 vs 7 — but other than the Clark Johnson and Metsa seats, most are in relatively safe Metro-area districts. The one exception could be the seat in District 57A, which Erin Maye Quade vacated in June to run for lieutenant governor as Erin Murphy’s running mate.

The last one? Marquart.

But Marquart illustrates something both sides say they are aware of: that political demographics aren’t necessarily destiny. Local conditions and the personality of the candidates still matter. Marquart, for example, is known as a hard-worker and constant door-knocker.

“We can’t just assume that because they voted for Clinton, they’ll vote for us,” said DFL campaign spokeswoman Susie Merthan. “We can’t assume that because they voted for Trump they’ll vote for them. Otherwise, the map wouldn’t look like it does and they wouldn’t hold those 12 and we wouldn’t hold the seven that Trump won. There’s more to it than that. Local connections matter. Work on the ground matters. Our candidates are making those connections and doing that work.”

Said Daudt: “Legislators are more local, especially House members. We represent the smallest area and we know a lot of our constituents. We go to the grocery store, our kids go to school together, we go to church together.”

House candidates, as a result, often get more votes within the district than the big names at the top of the ticket. “It’s more personal,” Daudt said.

The Hillary 12 vs. the Donald 7: meet the districts that may decide control of the Minnesota House