Tim Walz mostly ignored Jeff Johnson during the primary. He had more immediate problems to occupy his time, like getting past DFL-endorsed rival Erin Murphy and responding to the late entry of Attorney General Lori Swanson.

If Walz allowed himself to look ahead to November, the assumption was that it would be Tim Pawlenty — not Johnson — standing in the way. And when DFLer needed a Republican foil to make a point or raise fear of defeat it was Pawlenty, not Johnson, that Walz used.

It isn’t that he didn’t have his chances. With Pawlenty and Swanson skipping most campaign forums and debates, Walz, Erin Murphy and Johnson shared many venues over the summer. Yet Johnson rarely drew  Walz’s, or Murphy’s, attention.

Then Tuesday happened. And now it is Johnson, not Pawlenty, who will lead the GOP ticket in November as the party’s governor candidate.

In the wake of Johnson’s surprising primary victory, Walz has shifted his attention to the Hennepin County commissioner, while also trying to salvage the talking points DFLers had been using against Pawlenty since even before the former governor formally entered the race. “I would make the case that you could pretty much plug-and-play anyone in terms of policy,” he said of the GOP. “It’s the same old playbook. It doesn’t make that much difference to us.”

And he reciprocated a pledge made by Johnson, that the general election campaign could be both spirited and positive.

Of course, candidates can run positive campaigns. Going negative is what independent expenditure campaigns are for — and both candidates will have help in that regard. Alliance for a Better Minnesota, for example, had already created a campaign to remind voters of Pawlenty’s terms in office (dubbed “Meet Tim Pawlenty”), and quickly pivoted to going after Johnson, with a digital ad on health care and a new website. Meanwhile, the Minnesota Action Network, which until Tuesday had been all-in for Pawlenty, has begun emphasizing messages claiming the Democrats were too liberal and too ready to increase taxes and spending.

Pawlenty might have carried more baggage into the general election than Johnson, given the former’s two terms as governor and stint as a Washington lobbyist for the nation’s largest banks. But the reason Democrats targeted him was simple: They expected him to win.

Johnson was an afterthought. He also didn’t invite criticism because while he would often dissect the failings of Democrats in general, he didn’t use his time at joint appearances to directly attack Walz, Murphy or, on the rare occasions that she joined in, Swanson.

The tactic meant that he was often left free to follow their statements with his own, usually contrary positions. “I suspect I’m going to stand out a few times today,” he said at a candidate forum in Mankato featuring himself, Walz and Murphy.

While Walz and Murphy supported increased gas taxes, for example, he did not. While they promised before a local government audience to increase local government aid, he said he would make no such pledge. While they attacked those who seek to divide the state over immigration and refugees (not naming Johnson), he said it is an important issue that he would keep talking about. 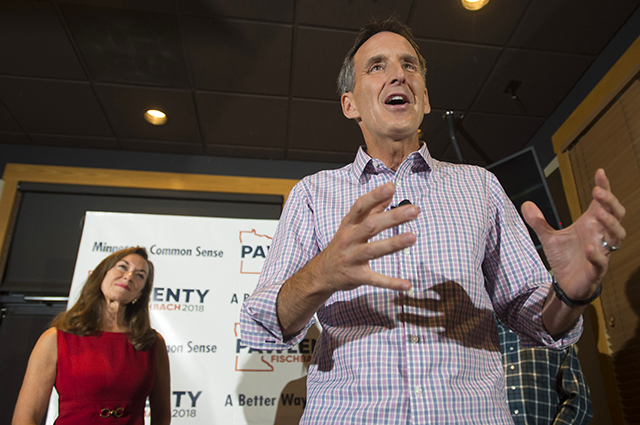 MinnPost photo by Craig Lassig
Tim Pawlenty might have carried more baggage into the general election than Jeff Johnson, given the former’s two terms as governor and stint as a Washington lobbyist for the nation’s largest banks.

Now, however, Johnson might be a better target for Democrats, at least if they — and not Johnson — are reading the polls correctly. To get the party endorsement in June and to win the primary in August, Johnson had to be more conservative than Pawlenty. While Pawlenty had started to pivot toward the middle as the primary drew closer — particularly on issues such as guns and even abortion — Johnson did not.

And then there’s Trump. Pawlenty’s endorsement of the president was always less enthusiastic than Johnson’s. And while both said they would be happy to have Trump’s endorsement and have Trump appear in the state on their behalf, Johnson seems to need it.

So, if Trump is not as popular in Minnesota now than he was in the fall of 2016, when he lost the state by just a percentage point and a half, Johnson may have miscalculated. An Emerson College poll of 500 Minnesota voters between August 8 and 11 reported that the president’s approval rating in the state is 35 percent. His disapproval rating: 51 percent.

That same poll asked if voters would prefer Walz or Johnson. Walz led 40 percent to 33 percent, with 27 percent saying they were undecided. Had Walz faced Pawlenty, however, his lead would have been even bigger, according to the poll: 44 to 33 percent.

Johnson said he was asked on election night how he would pivot away from Trump now that he won the primary. Johnson responded by saying that is what people hate most about politicians: saying one thing to one group of people and something else to another group.

“I have said from the start that I support the president and that I think he’s trying to take the country in the right direction,” Johnson said.

Walz, for his part, said this week that his positive campaign pledge might not extend to Trump. “The only thing is, when your first endorser uses the language that we’ve seen, there’s gonna have to be, at some point in time, to call that out,” Walz said, in reference to Trump and his Wednesday morning endorsement of Johnson on Twitter.

The man that Tim forgot: How Jeff Johnson’s victory changes the 2018 governor’s race