UPDATE: Minneapolis City Council members narrowly passed the proposal to give themselves more statutory authority over the city’s police department Wednesday evening, after this story’s original publication. The full City Council will vote on the idea Friday.

Here’s what we know — and don’t know — about the issue, which could end up before voters on Nov. 6.

What, exactly, is the proposal?
It would change a longstanding phrase in the city charter, which governs local laws, to give the City Council more statutory authority over Minneapolis police. Right now, Mayor Jacob Frey has direct oversight of the department.

The current statute reads: “The mayor may make all rules and regulations and may promulgate and enforce general and special orders necessary to operating the police department.” The mayor also has the power to appoint, discipline and terminate certain police officers and leaders, though the City Council must give its blessing to the mayor’s nomination for a new police chief.

The new proposal asks city leaders to remove the current language in the charter and replace it with a phrase to divide governance of the police department equally between the mayor and council. The exact phrasing isn’t set in stone; City Council Member Cam Gordon has written a draft of the ballot measure — which would have to be approved by Minneapolis voters in November — but the full City Council must approve the wording.

That aside, the 13-member City Council already has influence over police in other ways, such as its vote on the mayor’s annual budget and approving contractual agreements, among other avenues. Those agreements include grants to cover the police department’s body-worn camera program, for example.

Gordon, who has represented neighborhoods near the University of Minnesota on the council for more than a decade, introduced the idea amid public outcry over two police officers’ use of force that killed Thurman Blevins in June. Since then, some city leaders have come forward saying a revamp to the current structure is needed to hold police accountable — while others, including the mayor, argue the change would muddle the chain of command and carries too many logistical unknowns.

The tension marks the first major face-off for the City Council since five new members were elected last fall. City Council Member Alondra Cano, who chairs the Public Safety Committee and is against the change, said members’ different understandings of their current legislative and executive powers is the “real crux” of the issue. She said Gordon hasn’t met with her to explain how the charter amendment would give the council more oversight than it already has. Gordon didn’t respond to multiple interview requests.

So, what would the change mean for policing on a day-to-day basis?
We don’t know. All that’s documented now: Gordon’s idea for language that could go before voters, which would make the city’s charter vague enough for the council to create further policies to flex and define its new authority. How exactly the police chief would report to both the mayor and council, as well as under what circumstances the council would hold public hearings, are unknown.

Is there any research out there showing that this would work, or how?
According to Michelle Phelps, an assistant professor of sociology at the University of Minnesota who specializes in criminal justice, very little research exists on the effectiveness of distributing the power of police departments among multiple arms of government. Most cities have a structure in which the police chief reports to the mayor or some type of city manager, she said. 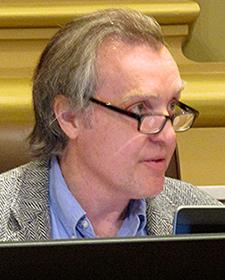 Phelps senses a real desire among local elected officials to respond to the public’s pleas for greater police accountability after recent high-profile police killings: Blevins, Philando Castile and Justine Ruszczyk Damond. But whether Gordon’s proposal would actually lead to better results is unclear, since the mayor is elected to represent the needs of the entire city already. Also, it would be crucial for the City Council to be mindful about keeping changes consistent across wards, she said.

Another nuance to consider: “The politics of ballot amendments,” she said. With questions that require a “yes” or “no” vote from the public, narratives from supporters and opponents often conflate issues to get the point across simply. “I don’t think we really know what change would come and whether that change would be a good thing or not,” Phelps said. “There’s a desire to do something, but the specifics of whether this will do something is an open question.”

But here’s what’s key: The change wouldn’t automatically fix the fundamental reason  some people are upset with police — officers are using excessive force, sometimes resulting in death, and case law leaves little room for prosecutors to charge them for it. “There are a lot of structural pieces of the equation that, even if the City Council was given full control, are unclear how they would be addressed,” she said.

What’s the Minneapolis’ charter amendment’s path to becoming reality?
In a word: complicated.

Rewind roughly two weeks, when the City Council voted 10-2 to keep the proposal alive. (That didn’t mean all 10 members support the change; some said they’re simply open to continuing conversations around the idea.) That vote scheduled the charter amendment proposal for a hearing with City Council members from both the Intergovernmental Relations and Public Safety and Emergency Management committees, which will take place Wednesday afternoon. There, committee members will decide if, or in what form, they want the proposed amendment to move forward. They’ll also listen to testimony from the public.

If the committee members approve it, the matter will go to the city’s Charter Commission, which is composed of 15 community members appointed by Hennepin County’s chief judge. They, in turn, will make a recommendation to the entire City Council on the matter. (All ballot measures need a look from the commission under state law.)

The full City Council will convene Friday for a meeting at which they could take up the proposal. The council has an Aug. 24 deadline of approving ballot language or it has no chance of making the Nov. 6 election.