On a hot August day at this year’s FarmFest — the annual ag industry convention that draws thousands of farmers along with the tractor hawkers and politicians trying to sell them things — attendees passed a big, white sign: “I support free trade.”

The sign was mounted on a board outside the Minnesota Farm Bureau tent, and attendees on their way to picking up a famous porkchop-on-a-stick for lunch were invited to add their signatures to the board by two members of the pro-trade group Farmers for Free Trade, who set up the display.

By lunchtime on the show’s first day, a few dozen attendees had already signed their names in multicolored sharpies. A short man in a camouflage hat walked up to the board and asked, “Are you sending that to Trump? We know about it here, you better send it to Trump.”

The hog farmers and soybean growers who attend FarmFest every year don’t need to be reminded that their livelihoods depend on free-trade policies in the agriculture business. Apparently, however, many of them now believe that President Donald Trump does: His tariff-heavy approach to resolving trade disputes has sparked trade wars with top partners like China, Canada, and Mexico; billions of dollars worth of new penalties have been imposed on hundreds of U.S. goods by these countries after the Trump administration had done the same to them.

The U.S. agriculture sector thrives on exports, and that’s why it has borne the brunt of this year’s trade disputes so far: other countries have slapped penalties on a variety of U.S. products, but have moved quickly to hit agricultural staples, from pork and soybeans to corn and cotton.

With the impact of tariffs setting in — and farmers facing declining incomes for the fifth straight year — the mood in farm country right now is defined by uncertainty and anxiety. Leaders in the agriculture sector are running out of patience with Trump’s tactic of using tariffs as a tool to compel trading partners like China to accept terms more favorable to the U.S.

Other farmers, however, are more inclined to give a long leash to a man rural America supported overwhelmingly in 2016, to see if his approach might just yield long-term gain when the short-term pain goes away.

Ask most farmers about it and they’ll lay out their support for free trade in stark terms, peppered with anecdotes and statistics about what it means for their bottom lines if they have access to as many markets as possible for what they grow.

“We’re so blessed we can grow more than we can use,” Kevin Paap, the president of the Minnesota Farm Bureau, told MinnPost as U.S. Senate candidates wrapped up an hourlong forum that was heavy on tariff talk.

“We’ve gotta remember that 95 percent of the people in the world don’t live in the U.S., and that’s why these exports are so important. … You’re not going to not deal with 95 percent of your customers.”

The products that form the foundation of Minnesota’s export economy have been the hardest hit by countertariffs from foreign governments. Soybeans, for example, make up one-third of Minnesota ag exports. China slapped 25 percent tariffs on soybeans, and while Mexico and the Philippines are top destinations for Minnesota soybeans, China is the biggest buyer of U.S. soybeans.

Those tariffs, then, have sent ripple effects through the entire soybean sector, crashing prices by 20 percent and prompting a 5 percent decline in soybean futures — just as soybean growers are poised for a record harvest in 2018.

Pork, another pillar of the Minnesota agriculture economy that accounts for 10 percent of exports — which was $717 million in 2016 — is also being targeted by trade adversaries. Mexico and China, two of the top four destinations of Minnesota pork, have put in place 20 percent and 60 percent penalties on U.S. pork, respectively. 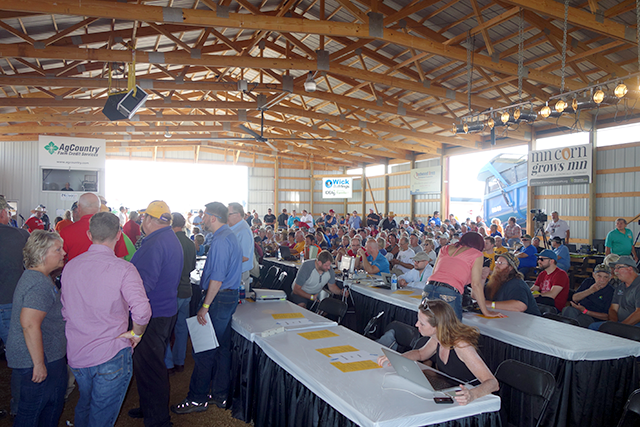 MinnPost photo by Peter Callaghan
With the impact of tariffs setting in — and farmers facing declining incomes for the fifth straight year — the mood in farm country right now is defined by uncertainty and anxiety.

Farmers and their allies in Washington have worked hard in recent decades to open up new markets for their products. Canada and Mexico, frequently among the top destinations for what Minnesota grows, have gotten that way thanks to the North American Free Trade Agreement, which began in 1994.

Farmers like Lori Stevermer, who markets products for Mankato-based Hubbard Feeds and lives on a 450-acre hog farm in Faribault County, recalls that in the early 1990s, before NAFTA, the U.S. imported more pork than it exported. Now the U.S. is the world’s largest exporter of pork products.

“We’ve built our business on exports,” Stevermer says, adding that the current situation — in which pork producers are worried about losing foreign markets — is uncharted territory. “We’ve not been in this scenario before.”

Paap, the Farm Bureau president, frequently reminds people of something he wrote on the Farmers for Free Trade board at FarmFest: “Once you lose a market, it is really hard to get it back!”

The escalation of the trade war has many farmers around Minnesota wondering how, or if, they will be able to weather it without sustaining long-term damage or going under altogether. Ted Winter, who grows corn and soybeans in southwestern Minnesota’s Nobles County, says the tariffs have been “devastating to farm families out here.”

“Over a period of the last 20 years, people have worked and promoted selling more of our product in the world,” said Winter, who serves on the board of the Minnesota Farmers Union and formerly served in the Minnesota House as a Democrat. “If we can’t sell in the world, we get a low price on the entire product,” he said, explaining that the price for a farmer’s entire crop will decrease if they’re unable to sell only a few bushels. “That’s why the export market is really crucial.”

Winter says that farm families are resorting to drastic measures to try to keep themselves afloat as tariffs continue to impact the agriculture economy, like leveraging the value of their farmland to mitigate debts they are likely to incur when they lose money on this year’s harvest.

“When the president comes in and says, I think the best way to fix everything is to put a tariff on it, you take a lower price, you go back one or two years and you don’t catch up for 10 years, because there won’t be enough changes, farmers are behind the ball,” he said.

Gary Wertish, president of the Minnesota Farmers Union, says a problem with the Trump administration’s argument that things will get much better after a rough patch is that vulnerable farmers may not survive.

“If there’s no recovery in prices, there’s going to be farmers who aren’t going to be around for the long run,” he said. “The first ones to go will be young farmers who don’t have the equity to hang on.”

He criticized Trump for beginning a trade war without trying to work through issues more constructively with other countries, especially allies like Canada and Mexico. “Right now, we’ve isolated ourselves all alone. The farmers and rural communities are going to bear the brunt of it.”

Some Minnesota farmers have already chosen to move on from the business. Phil Nestande, from the Renville County town of Fairfax, is one of them. “It was getting thinner and thinner every year,” said Nestande, who told MinnPost about selling his farm equipment and moving into the construction business. “It’s only going to get worse,” he said.

Not everyone at FarmFest felt the doom and gloom. Charles Sobode, a farmer from the southwestern Minnesota town of Jackson, said Trump is on the right track with his tariff strategy.

“They need us more than we need them,” he said of trade adversaries like China. “We can’t have the trade deficits.”

Trump-supporting candidates at FarmFest’s political forums returned to that theme often, and advanced the idea that strong action was required to put U.S. farmers on a fairer trade footing.

GOP State Sen. Carla Nelson, who is running in a primary for the 1st Congressional District seat, said, “The fact of the matter is, we have not had fair and free trade for a long time. … I applaud President Trump for taking the bull by the horns here. We have patience that there will be a better deal at the end.” (She did caution, however, that “patience is waning.”)

Paap said that some in Minnesota may be giving Trump a longer leash because of his respected team of advisers on agriculture, like Department of Agriculture Secretary Sonny Perdue and Deputy Secretary Stephen Censky, a former leader of the American Soybean Association who grew up on a corn and soybean farm in southwestern Minnesota.

“I think ag has a lot of patience with this administration because of the team that is fighting for ag,” Paap said. He also added that the administration’s plan to offer a $12 billion emergency relief package to farmers affected by the tariffs was a recognition that Trump understands the financial pain farmers are going through. Others at FarmFest denounced that package as a bailout: “Farmers want trade, not aid,” said Angela Hofmann with the Farmers for Free Trade group.

But Paap suggested farmers’ patience was not unlimited, even for a friendly president. “We have to see the end of the runway,” he said. “Let’s get something done.”

Veterans of the ag industry — who have seen booms and busts related to diseases, broader economic conditions, and even past trade disputes — were reluctant to say if the outlook for Minnesota farmers now was as, or more, foreboding than in dark times past.

“Trade is a complex situation,” said Stevermer, whose family raises hogs. “I try to be patient and have confidence that it’s being worked out.” But she admitted things seem a little more dire at the moment. “There’s always some type of a challenge, there’s always something going on. You just hope that too many of these things don’t stack up in a row.”

“I do feel confident, that gut feeling we’ve always been able to work ourselves out of this in the past. That may be too wishful thinking,” she said.

“I guess most farmers are optimists.”

The mood among Minnesota farmers is defined by uncertainty and anxiety. Only some blame Donald Trump for that