Those in the world of agriculture often say that theirs has always been a bipartisan — or even nonpartisan — bright spot in a political climate that is increasingly polarized, with Republicans and Democrats typically coming together to advance their priorities in sweeping legislation like the federal Farm Bill.

At this year’s FarmFest, the annual agriculture trade show that doubles as a forum for rural Minnesota political concerns — and a must-stop for ambitious politicians — candidates for Congress appeared before farmers on Tuesday to discuss how they would go to work on their behalf.

While a group of five U.S. Senate hopefuls and eight U.S. House candidates pledged to prioritize farmers, they often differed on the details of how they would do it. And they differed even more about the impact that the policies of President Donald Trump — who overwhelmingly carried the rural vote in the 2016 election — are having on their livelihoods.

While candidates answered in-the-weeds questions about important ag industry concerns like livestock disease outbreak preparedness and technical education, Trump’s rhetoric and record on everything from trade to immigration to infrastructure gave a more partisan feel to FarmFest, putting Republicans and Democrats at odds on the issues — and even putting members of the same party at odds with each other.

With the primary election less than a week away, FarmFest’s forum Tuesday morning for the five candidates competing in a special election for the U.S. Senate seat vacated by Al Franken provided a high-profile venue for the candidates to make their final pitches — or, in some cases, position themselves for the general election in November.

Appearing for the forum on the FarmFest grounds near the western Minnesota town of Morgan were Sen. Tina Smith, the incumbent Democrat appointed by Gov. Mark Dayton to succeed Franken, and her two DFL primary challengers, former George W. Bush ethics lawyer Richard Painter and attorney Nick Leonard. On the Republican side, state Sen. Karin Housley, the GOP’s endorsed candidate, participated along with businessman Bob Anderson, who is challenging her in the primary.

The candidates took rounds of questions from a panel of Minnesota agriculture leaders on issues from trade and ethanol standards to health care and the Endangered Species Act. Since the forum wasn’t formatted like a debate, the candidates generally strayed from going directly after one another — save for Painter, the former Republican running as a Democrat who has attracted attention for his persistent needling of Trump, and politicians of both parties.

In a topic that came up first and most frequently on Tuesday — President Trump’s liberal use of tariffs and trade wars with U.S. allies and adversaries alike — Painter hammered Trump, accusing him of recklessness and of using what he called racist rhetoric against U.S. trading partners.

Those anti-Trump harangues drew some notable applause from the crowd. But Painter also went after his rivals, Smith and Housley, for their support of the administration’s tariffs on imported steel and aluminum. Those new penalties, popular in mining-heavy northeastern Minnesota, helped to spark the broader trade conflict. On several occasions, Painter specifically mentioned the two lawmakers by name, saying they were “reckless” for encouraging the steel tariffs.

Smith and Housley, meanwhile, mostly ignored Painter’s barbs, and over the course of the roughly 80-minute forum workshopped their pitches to farm country for the general election.

In her remarks, Smith put her eight-month tenure in the Senate on display, talking up her recent work on the Senate Agriculture Committee, where she’s negotiated with Agriculture Secretary Sonny Perdue and worked on provisions in that chamber’s version of the Farm Bill, which passed overwhelmingly in June. (“Actions,” Smith noted at one point, citing her mother, “speak louder than words.”)

She argued she’s already been a successful, solutions-oriented legislator during her brief time in D.C., and avoided saying much about the president beyond trade. “I don’t think people send us to Washington to have big fights all the time,” she said. “I think they send us there to get things done, and if you send me there, I will make that effort.”

While Smith did hammer the administration for its trade policy, Housley defended the White House’s approach, and said that she’d be better positioned to advocate for Minnesota farmers as a fellow Republican — a point that voters may hear her make often during the general election.

“When it comes to trade, no one has suffered more than you guys out there,” she acknowledged. “With that being said, there’s nobody that can benefit more from a fair trade agreement. … I have a direct line to the president, being on the same team when there’s any issues that come up.”

“We’ve gotta be patient and hopefully the president can get this done sooner rather than later to ease the anxiety that’s happening.”

In her answers, Housley — a two-term state senator from Washington County — framed her experience in St. Paul as working to advance pro-business, anti-regulation policies that helped farmers, like prioritizing funding for roads and bridges over light rail in the state’s funding bills.

On Tuesday afternoon, candidates for U.S. House in Minnesota’s five most agriculture-heavy districts met for a 90-minute forum. As the Senate candidates did, they dove into a broad range of ag-related issues, but sparred often over the impact Trump, and the GOP majority in Congress, has had on farmers, and on the country more generally. 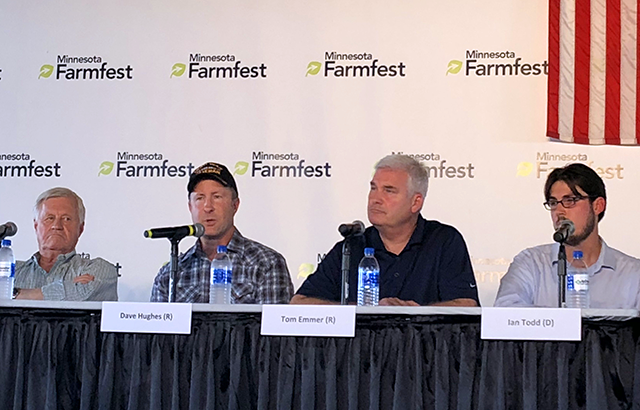 Of the races where all candidates were present on the panel, the one in the 1st is considered the most competitive: both on primary day, where Republicans will pick either Hagedorn or Nelson to advance, and in the general, where the race between the Republican and Feehan is considered a toss-up by most political prognosticators.

Hagedorn, the GOP-endorsed candidate, is making his fourth bid for the CD1 seat and emphasized he’d work hand-in-glove with Trump to roll back what he called the Democrats’ “war on agriculture,” and their broader efforts to create a European-style socialist state. He defended the president’s approach on trade, saying he deserved “a little latitude” as president to execute his strategy.

Nelson, meanwhile, took opportunities to mention her eight years of work as a senator in St. Paul, and beyond — in a question about public land-grant university funding, Hagedorn passed, while Nelson, a former school teacher, talked up her service on an advisory board to the University of Minnesota extension and her work on the Senate’s education panel.

“I’m running because we need a proven conservative leader. Unlike my opponents, I’m the only proven conservative with a proven voting record in this race. In the legislature I have already accomplished in the state things that President Trump has talked about,” she said, citing tax cuts and infrastructure. 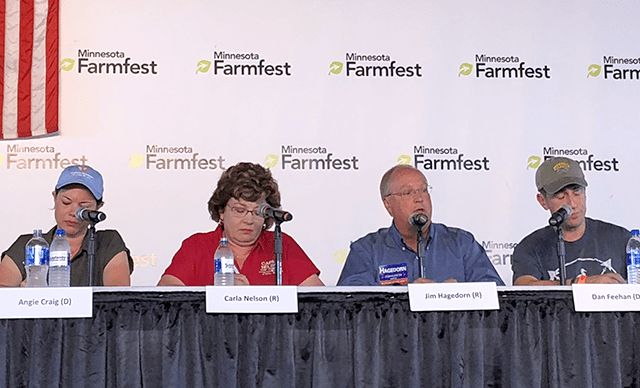 Feehan, a former U.S. Army Ranger and Obama official at the Department of Defense, frequently mentioned his experience in national security, and generally shied from the partisan red meat offered up by Hagedorn to take on bigger-picture issues. “What is the future of southern Minnesota?” he asked rhetorically in response to a question about improving the rural workforce. “Where are people going to come from? We have to remove barriers to entry into farming so young people can take advantage of it.”

On the other end of the dais, Peterson, the 27-year veteran of Congress and the top Democrat on the House Agriculture Committee, loomed large — in particular, his role in this year’s Farm Bill. While the Senate easily passed its version of the sweeping, half-a-trillion dollar legislation, the House’s version became mired in partisan bickering and maneuvering when Republicans added new work requirements for people who receive Supplemental Nutrition Assistance Program, or SNAP, benefits.

Early in the process, Peterson said he and his Democrats would not negotiate with Republicans if those provisions remained, and when they did, they walked away. Months later, the Farm Bill failed on the House floor before it passed with only Republican votes.

Peterson said that work requirements in SNAP — which he helped fashion in 1996 — have not worked, and that Republicans did not propose the changes needed to make them work better. “I’m happy to work with them on problems, not on some fictitious thing that people come up with,” he said.

Hughes, the Republican challenging Peterson for a second time, treated the forum more like a debate and frequently went after his opponent. “Congressman Peterson walked away from the Farm Bill for seven weeks. … He abandoned the people of western Minnesota for seven weeks,” Hughes said. “I will never walk away from the Farm Bill as this gentleman did.”

On trade, Republicans like Hughes and Hagedorn were willing to give Trump the benefit of the doubt on his tariff strategy; Hughes, an Air Force veteran from Karlstad, claimed that the western Minnesota farmers he talked to all support the president to a person.

On other issues, such as the administration’s proposed $12 billion package to ease the blow of trade wars on farmers, Republicans voiced skepticism along with Democrats. “I want more facts,” Emmer said of the plan. He also wondered if there weren’t other ways to help out farmers, such as allowing them to blend corn-based ethanol fuel into petroleum year-round.

While all of the House candidates sounded similar notes about the challenges facing rural communities and the need to help, they presented starkly different visions about what the future holds — and how November’s elections will affect that future.

“Elections have consequences. Beware of people who are running against things,” Emmer said, before launching into a list of what the administration and Congress have accomplished since Trump’s inauguration. “We want to continue what we’ve started. The future is very bright.”

“Y’all are optimists,” Feehan told the crowd. “What I worry about today is that our Congress and our executive branch don’t share that optimism. That they are not working just as hard as you to mitigate daily risks you face in your life, that they are in fact making more risks for you, making it harder to thrive.”

“What this election is about, what the future of southern Minnesota is about, is the question of … is there going to be dignity in your work?”