If you live in Hibbing, your vote for a member of the U.S. House in November will be worth more than someone voting for a House member in Minneapolis.

That’s because the Fifth District, located in Minneapolis and its suburbs, contains almost 10 percent more people than the Eighth District, which covers a huge swath from northeastern Minnesota on down to the northern Twin Cities ’burbs.

They didn’t start out that way. In 2012, after the new district lines were drawn, the populations of Minnesota’s eight congressional districts were closer to each other, based on counts from the 2010 Census. But in the half-a-decade since then, some districts populations have grown much faster than others.

For now, that means that — in theory — a northern Minnesota voter is slightly more represented than her Twin Cities counterpart. But in just a few years, the district lines will be drawn again, and taking account of these shifts could mean big changes for Minnesota’s districts — especially if the number of those districts drops from eight to seven.

The differences in population growth between Minnesota’s congressional districts are pretty stark.

The First District, a band across the state’s southern border farming regions that includes Worthington, Mankato and Rochester has seen minimal growth. It added about 5,000 people since 2012, the first year new Congressional district lines were in use.

The Second District, a slice that includes counties south and east of the Twin Cities, has seen rapid growth. Twin Cities suburbs like Lakeville and Eagan have bulked up. CD2, which stretches down the Mississippi past Wabasha and west to Scott County, added nearly 23,000 people since 2012.

The Third District, which is mostly made up by the Twin Cities’ western suburbs, has also seen rapid growth, with more than 26,000 additional residents since 2012.

Districts 4 and 5, geographically small districts that comprise Minneapolis and St. Paul and some of their suburbs, have grown the most, with an additional 27,000 and 34,000 people since 2012, respectively.

The Sixth District, the Central Minnesota district up the I-94 corridor in the area northwest of the Twin Cities, has grown by more than 26,000 people.

The Seventh, a near cross-section of Minnesota’s western side, ranging from Kittson on down to Pipestone County in the near southwest corner of the state, added an estimated 5,000 residents.

The Eighth District has grown less than any other in Minnesota, adding only an estimated 2,000 people since 2012.

The fastest-growing parts of the state are the Twin Cities and their suburbs.

What it means for redistricting

These population shifts will all play in to the redrawing of Minnesota’s congressional districts after the 2020 Census.

If Minnesota keeps its eight seats in the U.S. House, redistricting will just be a matter of moving existing boundaries around, said Peter Wattson, longtime Minnesota legislative staffer and redistricting expert.

In this case, what’s likely to happen is a geographic shrinking of districts 2, 3, 4 and 5, with parts of them added to the smaller population districts, evening out the populations.

“(CD1) would probably  just go a little further west, and 8 would probably have to move a little bit into Stearns County,” he said. The 25,000-or-so people in Todd County could be moved from the 7th to the 8th, among other changes. 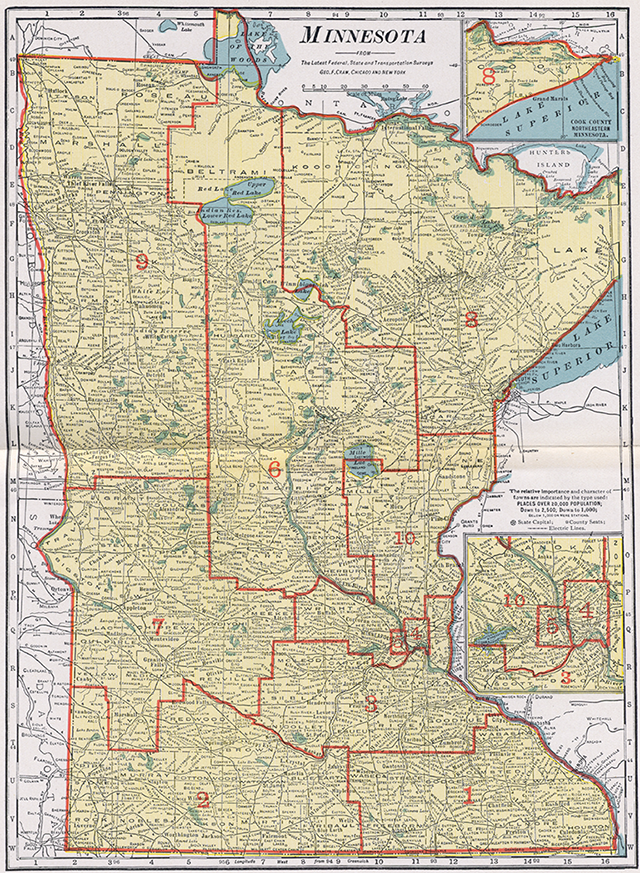 Courtesy of the Minnesota Legislature
A map of Minnesota's ten congressional districts in 1913.

That’s if Minnesota’s congressional delegation remains the same size. But many predict Minnesota, whose population is growing steadily but not as fast as other states, will be one of several states to lose a Congressional seat to fast-growing southern and western states.

“Each district would need to hold about 100,000 more people if we lose a Congressional seat, so going from roughly 700,000 or so, plus 100,000. That (lost) seat would just need to be redistributed across the other seven,” Brower said.

If that happens, redistricting will become a much more invasive process.

You might see the Fifth District moving further into Minneapolis suburbs; the Fourth usurping all of Washington county to the east of St. Paul and maybe adding parts of Dakota County; the Third moving out into the Sixth.

Losing a seat could put one incumbent out of the job, assuming there’s no retirements (for example, Collin Peterson, 74, who has represented Minnesota’s slow-growing 7th District since 1991, might get edged out by redistricting – or retire).

“If we do go to seven seats, that’s a really big mess,” Wattson said.

At least that’s been the case in the past.

Down from 10 House seats

After the 1930 Census, when Minnesota went from its all-time high of 10 seats down nine, the redistricting process was so acrimonious that no plan had been agreed upon by the time Congressional elections rolled around. All the candidates for U.S. House ran at-large — statewide — Wattson said. 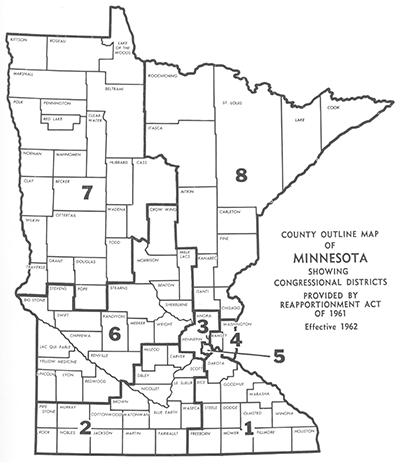 Courtesy of the Minnesota Legislature
A map of Minnesota's eight congressional districts in 1961.

After the 1960 Census, the last time Minnesota lost a seat, putting it at its current count of 8, the lines got drawn, but it took two special sessions to get it done, Wattson said.

“What will happen in 2022 is going to depend on who is elected governor in 2018 and who is in the majority in the House and Senate,” Wattson said.

All we know in the meantime, really, is that some parts of the state are growing faster than others. And that that’s likely to keep up through 2020 when the Census is taken, causing district lines to shift, whether Minnesota keeps eight seats in Congress or loses one.

“There’s a lot of momentum in population growth because you get younger people together and young people are the people who tend to make more humans and also to move around and draw more in and so-forth,” Brower said. “That’s how we know that the growth where we've seen it will continue.”