A few years ago, not long after arriving in Minnesota, I went to the Minnesota State Fair, mostly to see what all the fuss was about. Whether I’d been to “The Fair” was usually the second question asked by natives, right after they asked where I went to high school.

It was like other state fairs. Only bigger. And with more chocolate chip cookies smeared onto the pavement.

But I learned that there are three things about which you should never challenge Minnesotans: 1. That skyways are fabulous and necessary; 2. That Minnesota is better than other states because of voter turnout; and 3. That the Minnesota State Fair is like a religious experience, except with chocolate chip cookies.

Trying to convince Minnesotans otherwise is like trying to teach a pig to sing, which as it turns out is the opening act for ZZ Top on Monday.

Mostly for fun — but also to find all the politicians and state agency press aides who haven’t been returning my phone calls — I returned to the fair this week to see what has changed — and whether it might have grown on me in the intervening years.

So now, after 15,000 steps and half a tube of sunscreen, I can reveal the 29 things I learned, relearned and unlearned from another sojourn through the Minnesota State Fairgrounds:

1. Not that much has changed in four years. True, there are a few new buildings and some new foods — the source of obsessive coverage every year — but the Great Minnesota Get Together is mostly the same get together because that’s how people like it. And despite the introduction of Deep Fried Dilly Dogs and Cheesy Sriracha Funnel Cake Bites, most people eat pronto pups, turkey sandwiches and stuff on sticks.

2. There is a food item called Tino’s Dough Balls.

3. The Elephant Ears are homemade, so none of those mass-produced elephant ears here.

4. It was 9:20 a.m. when I passed a booth selling Chocolate Chip Cookie Beer. It wasn’t the hour that caused me to decline.

5. If you get here early enough, you only have to wait about 15 minutes to see the seed art/crop art, which is brought to you by Bremer Bank. (The seed art has a corporate sponsor, yeah.)

6. Despite its shortness, the seed art line still moved pretty slowly. Minnesotans take their time when it comes to seed art.

7. From a distance, Rosie O’Donnell in seed art kinda looks like Amy Klobuchar in seed art.

9. It was part of seed-art queen Lillian Colton’s collection but I wonder how many people recognize the subject of her rendition of Dan Rather. If it is a lot, it suggests the demographic for seed art is about the same as that for Parade Magazine. 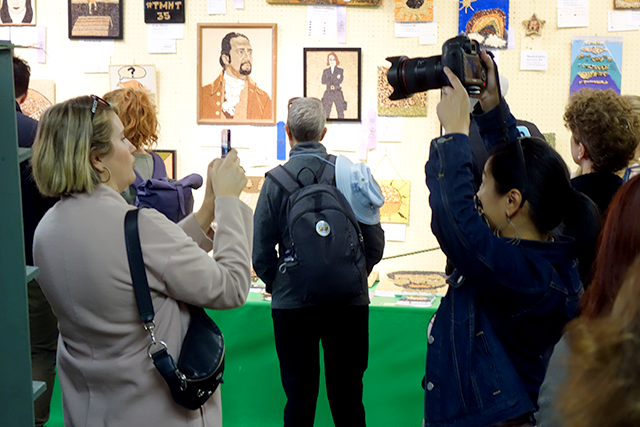 11. Please read nothing into my placing this item next, but AARP appears to have been captured by the baby boomers with their “Rock Vote Win” booth theme.

12. I understand that putting wooden sticks into food items makes them easier to eat while walking around. Perfectly logical. But what is the breaking point for extending the wordplay to non-food items? “Summit on a stick?” “Math on a stick?” We get it, lots of sticks here.

13. I didn’t find the place where they let people race vegetables this time. It doesn’t mean it isn’t still at the fairgrounds somewhere, but I prefer to think that people finally realized what horrors occur when those vegetables grow too old to race anymore.

14. Politicians and elected officials appear to love the fair as much as everyone else, proving that they’re just regular peo… oh, who are we kidding, they are not regular people. It takes a certain genetic mutation to put oneself out in a very vulnerable public space time after time, begging for validation from people you don’t know, almost like they’re TV news anchors. But the fair at least gives them the opportunity to act like regular people, to dress down and eat stuff that is very bad for them.

15. That said, regular people don’t go from eating fair food from a Mexican stand to being asked on WCCO radio about U.S. Rep. Ilhan Omar’s romantic life — as Attorney General Keith Ellison did.

16. Has any Minnesota election ever hinged on which candidate made more appearances at the fair?

17. You might now know that the Minnesota State Fair has a mascot that is apparently supposed to be a gopher but is probably a ground squirrel. You also might not know that this mascot has a name, which is Fairchild. You definitely didn’t know that he is the inspiration for U.S. Women’s Soccer Team captain Megan Rapinoe’s post-goal celebration.

19. Do any other mayors in America have a bigger bromance than that of St. Paul Mayor Melvin Carter and Minneapolis Mayor Jacob Frey? They were on MPR together; they made Angela Davis seem like a third wheel.

21. So you put a stick in a sausage and stuff that sausage inside a hollowed out dill pickle and then you bread the whole thing and deep fry it. And then you eat it.

23. Speaking of marketing, the Giant Slide is an empire built on brilliant marketing. Had it just been called the Big Slide or the Pretty Tall Slide I think it would have been shut down a long time ago.

24. Carter and Frey made news at the fair by announcing they were signing a joint declaration honoring the Giant Slide on its 50th anniversary. Had Carter not corrected Frey when he called it the Big Slide the declaration might not have been valid.

25. Frey and Carter said they were going to go down the Giant Slide together. That should go without saying.

26. I know we’re not supposed to ascribe human thoughts and feelings to animals, but I do wonder if they think it’s weird to walk down the streets at the fair and see all the food stands selling beef and pork. Maybe they feel pride.

27. The last time I was in the Poultry Barn was during the bird flu epidemic and there were only photos of the winners inside cages. This year was better. And louder.

28. I just can’t get enough of sheep in robes with holes for their eyes and ears. It never gets old (unlike the on-a-stick schtick.)

29. They still carve likenesses of people and princesses out of butter while other people watch.