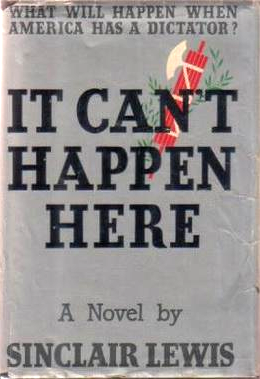 The New York Times and much of the U.S. press had opposed his election, but their constant attacks had only served to enhance his electoral prospects. Now, during his second year in office, the president wanted “louder, more convincing Yeses from everybody around him,” according to the nationally known writer who chronicled his rise to power.

The description of an American president surrounded by “yes” men may have a contemporaneous ring, but these words were written more than 80 years ago by Minnesota native Sinclair Lewis about his fictional creation, a president with the unlikely name of Berzelius Windrip.

The ignominious Windrip appeared on the pages of Lewis’ 1935 novel just as Hitler and Mussolini were tightened their hold on their beleaguered nations. At home, two American demagogues, Louisiana’s Huey Long and Detroit-based Father Charles Coughlin, had gained a national following during the early years of the Great Depression.

In “It Can’t Happen Here” Lewis tells the story of Berzelius Windrip, known as Buzz, who is elected president in 1936 and transforms the United States into a totalitarian dictatorship. Loosely patterned after Huey Long, Windrip is serving in the U.S. Senate as a Democrat from an unidentified state when he bursts onto the national political scene.

“He was an actor of genius … with the power of bewitching large audiences,” Lewis writes. “There was no more overwhelming actor on the stage, in the motion pictures nor even on the pulpit. He would whirl arms, bang tables, and glare from mad eyes. … But below this surface stagecraft was his uncommon natural ability to be excited by and with his audience, and they by him.”

Attacks on the press, appeals to prejudice

Throughout his book. Lewis develops themes that continue to resonate in the world of 21st-century American politics. As the story unfolds, Windrip begins his rise to power, campaigning for the Democratic presidential nomination in 1936. Buzz augments his theatrical talents with attacks on the press and overt appeals to the racial and religious prejudices of his core supporters. The centerpiece of his 15-point program is a populist call for increased taxes on the rich and the redistribution of those tax dollars to ordinary Americans in the form a $5,000-a-year federal payment.

Buzz succeeds in wresting the Democratic nomination away from Franklin Roosevelt (who expected to face a real-life challenge from Huey Long in 1936. But Long’s life was cut short by an assassin’s bullet in September 1935, just as Lewis’ novel was being published).

Windrip goes on to defeat his Republican challenger, Walt Trowbridge, in the November 1936 general election. Trowbridge was defeated, Lewis explains, because he “represented integrity and reason in a year when the electorate hungered for frisky emotions, for the peppery sensations associated, usually not with monetary systems and taxation rates, but with baptism by immersion in the creek, young love under the elms, straight whiskey, angelic orchestras soaring down from the full moon.”

Windrip’s despotic takeover of the U.S. government is seen through the eyes of a small-town newspaper publisher named Doremus Jessup (known as Dormouse to his friends and family). As the novel opens, Jessup is living a bucolic life in the town of Fort Beulah, Vermont. Gradually, Jessup comes to recognize the threat that the newly elected president poses for the American democracy.

The book’s tone shifts to dystopian when Windrip declares martial law after Congress refuses to pass his bills, giving him full control over legislation and stripping the Supreme Court of its ability to block his edicts. His private army, the Minute Men (M.M), begins rounding up opposition congressman. Those who resist are charged with “inciting to riot,” while those who supported Windrip are “safeguarded” by the M.M. to protect them from “irresponsible and seditious elements,” according to a White House spokesman.

When Jessup writes a scathing editorial criticizing the Windrip regime and its Corporate State (Corpo) he s beaten by M.M. thugs and forced to convert his newspaper, the Fort Beulah Daily Informer, to a mouthpiece for Windrip and Corpo. Then, when Jessup’s loyalty to Corpo is questioned by neighbors who now support the Windrip regime, he is imprisoned in a concentration camp set up outside of Fort Beulah. Eventually Jessup escapes and joins the resistance, the New Underground, led by an exiled Walt Trowbridge, who is living in Canada.

(In a nod to his native state, Lewis makes Minnesota the center of the resistance and sets one of the key battles between Corpo and the New Underground in the town of Osakis, located 15 miles from his home town of Sauk Center.)

As fashioned by Lewis, Jessup may be a hero, but one with self-aware flaws. At one point, after he has been imprisoned by the M.M., he blames himself and others like him for the destruction of the American democracy. “The tyranny of this dictatorship isn’t primarily the fault of Big Business nor of the demagogues who do their dirty work,” he tells himself. “It’s the fault of Doremus Jessup! Of all the conscientious, respectable, lazy minded Doremus Jessups who have let the demagogues wriggle in, without fierce enough protest.”

Despite his archaic references and overly melodramatic plot, Lewis delivers a message that has disturbing implications for current state of American politics. “It Can’t Happen Here” serves as a cautionary tale for modern-day Doremus Jessups, who let “demagogues wriggle in without fierce enough protest.”