Between classes, homework, friends, work, most college students have a lot of demands on their time.

One thing that often falls by the wayside is voting. In 2018, 42.7 percent of 18 to 24-year-old Minnesotans who are U.S. citizens voted in the midterm election, according to data from the U.S. Census Bureau. That’s the lowest turnout of any age group in Minnesota and is only about two-thirds of statewide turnout for all age groups.

The University of Minnesota is hoping to help increase those numbers by making it easier to register to vote at its five college campuses across the state.

This year, the school added a notification on MyU, the website students use to navigate the university, that leads them to voter registration online and helps them sign up for texts and emails reminders to cast ballots.

The online voter registration and reminder efforts are part of a campaign to increase voter turnout on campus by increasing registration and education of students participating across levels of government.

For the last two elections, the University of Minnesota’s Twin Cities campus has participated in the ALL IN Campus Democracy Challenge, a nonpartisan nonprofit that aims to increase voter participation on college campuses nationwide, creating an action plan for each election. Thirty-six campuses, including public and private two and four-year schools in Minnesota, are currently participating in the challenge.

The Twin Cities campus plan to increase turnout for the 2018 election included a Voterpalooza party, a voter registration drive at the State Fair, flyers, tabling at the student union, a digital ad for sports events and emails from then-president Eric Kaler. At 58.7 percent estimated turnout among eligible student voters, the Twin Cities Campus (the data for which also includes the Rochester campus) had high turnout relative to other campuses, according to estimates from Tufts University. Public research institutions averaged 40.8 percent turnout.

Still, students and staff are looking to increase those numbers even more.

“We were trying to think of ways to break down the barriers of voting. Thankfully, Minnesota already has some of the best voting laws when it comes to same-day registration, absentee ballots and all of that,” said Max Hurst, the former MSA director of legislative and government affairs. The question, then, was how to meet students where they were at: online. MSA students and university staff pushed making voter registration available though MyU, the website students use to register for classes and pay tuition.

When students click the notification, they’re taken to TurboVote, a third-party website run by nonpartisan nonprofit Democracy Works. TurboVote helps them sign up for emails and texts about registration deadlines, elections and where to vote. They are also directed to the Minnesota Secretary of State’s office to register to vote online. 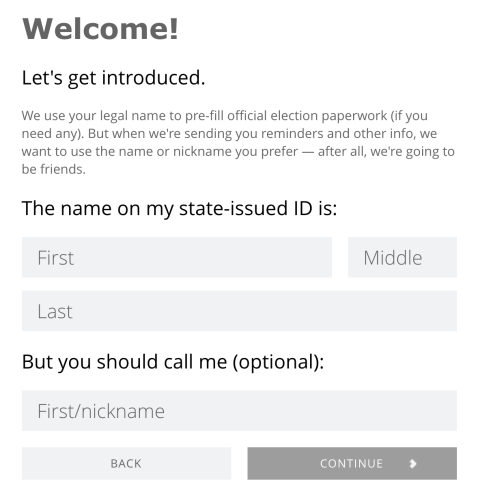 The registration notification made its debut on MyU across the University of Minnesota system before the 2019 election. Without publicizing the new registration efforts — and in a municipal election year with little on the ballot in University of Minnesota communities — about 1,000 students registered to vote, said Mike Miller, the university’s legislative advocacy coordinator.

Jennifer Domagal-Goldman, the executive director of the ALL IN Campus Democracy Challenge, applauded the U’s efforts to increase registration through online university tools, a nascent strategy on college campuses.

“(Sometimes) what’s preventing them from voting is not a degree of apathy that is often part of the narrative, but not meeting deadlines or having information,” she said, particularly when voter laws and precincts change frequently, and students move to different addresses regularly.

She recalled her first year in college, a presidential election year when she knew who she wanted to vote for but was busy and concerned with passing classes and getting along with her roommate. It all felt overwhelming. She doesn’t know that she would have voted if her mom hadn’t sent her absentee ballot in the mail.

The Center for Information and Research on Civic Learning and Engagement at Tufts University found that nationally, the most common reasons youth didn’t vote were that they didn’t like the candidates or issues, were too busy or had scheduling conflicts on election day and had problems had trouble with registration or ID. But, Domagal-Goldman said, research has found once a person votes, they’re more likely to vote again, so efforts to get students to vote when they’re young are likely to have lasting effects.

Domagal-Goldman expects 2020 to be a high water mark for student voting at colleges and universities in the U.S. “Some of it will be outside influences, some of it will be the work that places like the University of Minnesota have been doing ,” she said.

Miller says that between traditional efforts to get out the vote and the new online registration work, he’s hoping to see high turnout in 2020.

“I’m hoping lawmakers see this new engagement and really start engaging with the students on the world that they want to live in and their priorities,” he said.

The University of Minnesota has some of the highest voter turnout in the country. It’s trying to get it even higher