Municipal elections are often relatively quiet, low-turnout affairs. But a number of contentious issues in the Twin Cities — from the Minneapolis mayor’s race to a public safety ballot measure to rent control in Minneapolis and St. Paul — seem to be turning up the heat this year.

That means many potential voters are getting a barrage of texts — often unsolicited — from candidates and from groups seeking to influence voters. They often read something like: “Hi so-and-so, this is Sally. I’m a volunteer for [CAMPAIGN]. Early voting has started. Can [CANDIDATE NAME] count on your vote?”

Why are these people blowing up your phone? How did they get your number? And is there any way to make it stop?

Political text messages are nothing new, and there’s a simple reason for that: they work. The first studies on the vote-mobilizing effects of text messages in elections came out more than a decade ago. The studies found that people who opted in to texts reminding them to vote actually were more likely to vote after getting the reminder, said Melissa Michelson, a professor of political science at Menlo College in Atherton, California. 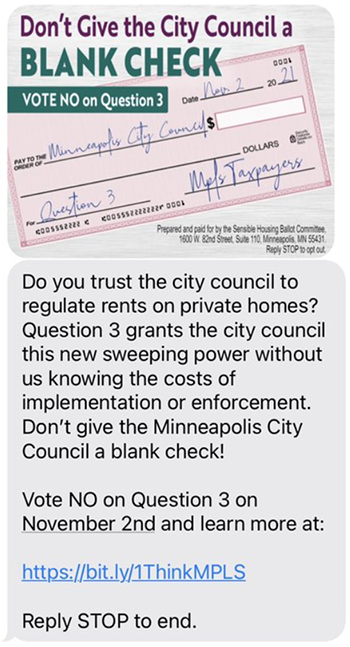 “That kind of opened the floodgates, because if you can send folks an unsolicited text message, and that makes them more likely to turn out, sending text messages is basically costless compared to manning a phone bank or doing door-to-door canvassing,” she said.

Political campaigns got wind of the technology and ever since, the use of text messages has only grown. Unlike marketing texts from businesses, which cell phone users have to opt in to to receive, the Federal Communications Commission says unsolicited political texts are permissible “if the message’s sender does not use autodialing technology to send such texts and instead manually dials them.”

The person behind the texts

So is it actually a person sending the text messages you’re getting from these campaigns?

Yes — but they’re probably not getting sore thumbs doing it. Companies have developed platforms with names like Hustle, GetThru, RumbleUp and Opnsesame that make it possible for a volunteer to send massive amounts of texts in little time from their couch, without having to type each one out individually.

“So legally, you can’t send out unsolicited mass text messages, but you can have robot-assisted or [artificial intelligence]-assisted text messaging where there’s a human pressing the send button over and over again to send the same message to tons of people,” Michelson said. 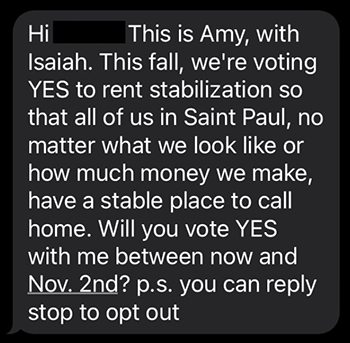 That technology brought about the real explosion in political text messaging, Michelson said. Often, the platforms also have pre-programmed responses that make it easy for volunteers to get voters’ information on where the election is or how they vote, too.

Politicians across the party spectrum — and groups advocating for a whole range of issues — are increasingly using text messages as part of their efforts to win elections.

But how do they know who to text?

There are a lot of ways your name (or sometimes, as evidenced by texts sent by readers, not always the correct name) and number could potentially end up on a political campaign’s list.

First, there are companies that generate and sell lists of names and phone numbers for targeted potential voters that campaigns can use to send text messages.

There are also the political parties themselves. Candidates who are endorsed, for example, by the Democratic Farmer-Labor Party, get access to the party’s voter file, which includes names, addresses and phone numbers of potential voters.

“I would gather that [candidates] who are endorsed candidates and who are using the voter file are probably getting at least some of their information from the voter file,” DFL Party Chair Ken Martin said.

There’s also the state’s voter registration file — generated from voter registration forms. This dataset includes names, addresses, phone numbers, and which elections people have voted in. It’s not allowed to be used for commercial purposes, but can be used for political ones, according to the Minnesota Secretary of State’s office.

Getting out the text

It’s not only that texts are cheap relative to other modes of political communication. They’re also popular because compared to emails, they’re much more likely to be read. 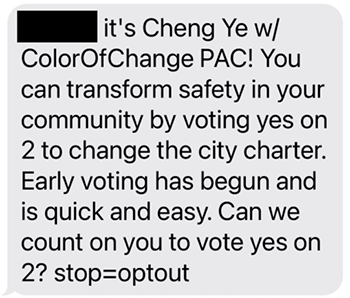 “There’s something personal about a text message. You always have your phone in your pocket or in your bag,” Michelson said. “For whatever reason, people are psychologically less able to ignore them.”

There are a couple specific ways campaigns may be using them: one, to identify voters who support their candidate so they can remind them to vote later, and two, to get people to vote in the near-term (early voting has started in both Minneapolis and St. Paul), Michelson said.

So now you know why you’re getting all those political texts. How do you make them stop?

For now, you kind of have to reply to them — if you text “STOP,” they are legally supposed to stop texting you. But given how many groups are using the messages, you might have to respond “STOP” to multiple campaigns, which can be frustrating — especially for people who are on metered text plans and have a monthly limit. But it should ultimately put a dent in the number of political texts you get, Michelson said.

It could also get harder for campaigns to send you quite so many messages soon.

As some of their phone customers have grown tired of unsolicited texts, carriers have planned changes, called 10DLC, that could put more restrictions on unsolicited political texts.

“We may be on the end of seeing these blast texting programs that we’ve been seeing in recent years,” Martin said.