Pollen
Pollen is a community comprised of civic-minded connectors who share ideas, career and civic engagement opportunities and peer-to-peer recognition to create positive impact and personal and professional growth for its members.

Failure is a better teacher than any college degree, says the editor-in-chief of Minnesota Business Magazine. 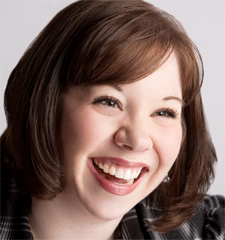 What three adjectives would you use to describe your childhood self?

Any professions you idealized as a child?

What cliché high school clique did you most identify with?

I was a high school loser. Some people claim this, but I truly mean it. My freshman year, I was on the cheerleading squad and we had soda bottles thrown at us. Sophomore year things were better—I became cheerleading captain sophomore year through senior year. I never really fit with ANY group. I had a few close friends and volunteered on the weekends. I think it’s the same as now; I truly try to stay away from any certain group. Diversity is far too important and creates a more well-rounded experience in our lives. Looking back, I see old friends from high school that still hang out with each other on the weekends. On one hand, I think it’s amazing. On the other, I’m glad I’ve moved on.

One of my favorite quotes is by Jack Kerouac:

“The only people for me are the mad ones, the ones who are mad to live, mad to talk, mad to be saved, desirous of everything at the same time, the ones who never yawn or say a commonplace thing, but burn, burn, burn, like fabulous yellow roman candles exploding like spiders across the stars and in the middle you see the blue centerlight pop and everybody goes ‘Awww!'”

That describes my feelings about people and friends, exactly.


What’s the greatest takeaway from your college/secondary-education experiences?

Life isn’t about grades. It’s not about who we thought we’d be and it’s certainly not about meeting others’ expectations. I had a journey to get where I am today and I’m proud of it.


Did you ever face a career crossroads? What were the options and why did you choose the path you chose?

I was once an administrative assistant and the truth was, I was horrible. I lost my core strengths in the filing and scheduling and became the arm of someone who had more money, more power, and more respect. For me, that was the biggest mistake I could have ever made. When I look back on where I thought that career was going, I realized it was simply a launching pad, but I’m still weary of how many times I’ve allowed myself to stay safe on the tarmac instead of taking a leap. I knew I wanted to write and lead. What stopped me was the thought of failure. I’ve failed many, many times. Without those experiences I wouldn’t have found out who I was or what I could truly accomplish. Failure is a better teacher than any college degree. I’m not good at scheduling and maintaining the life of anyone but myself.


Do you have any past embarrassing job titles in your closet?

I wiped vomit off tuxes at a tuxedo rental store for about three hours. As you can imagine, it didn’t work out.

Right after college, I would get up at 7:00 a.m. and work the morning shift at a local restaurant, and then I’d clean rooms at a small bed and breakfast. In the afternoon, I worked part-time for an electronics purchasing company. I was exhausted most days, but I felt it really prepared me. I’ve always worked with my hands, even in editing. I like the tangible—cleaning things I can touch and making everything better.


Three biggest career experiences that have led you to your current position?

When I was in my very late teens, the PGA Golf Tournament came to Hazelden. I was hired over the summer by Lanier Parking to wave a flag and help the cars park. I noticed they didn’t have anyone in their satellite office, and knowing that my Irish/Polish skin would weep at the certain sunburn I was going to receive, I nominated myself to run the office. Within a few hours, I was promoted. To this day, Lanier is one of the highlights of my career. While at the State of Minnesota, I received a call from the White House Office of Public Affairs. They used me as a resource for their Office of Volunteerism website and I applied for the “Director of New Media” position. Knowing I couldn’t move to Washington, D.C., with a very young child was a difficult decision. Making the connections to further my career and passion for government was an incredible opportunity. People could say I had good luck. The truth is, I knew when to ask the right question.


Number one biggest personal experience that has led you to your current position?

I think landing at Tiger Oak would be a culmination of different things including my communication skills—be it writing or verbal—and passion for tangible media. I think I’ve had an outspoken passion for print publications and the need for better content.

Has a failure ever lead to a success?

I had my daughter alone at 25 and cancer at 27. Everyone around me viewed both as a weakness. I saw my little girl’s face from the first moment she was in my arms and just knew we were destined for great things. My child and cancer define a powerful part of who I am. Failure doesn’t scare me anymore. Not waking up to see her little face or helping other cancer survivors is now my new fear. There’s nothing the business world can throw at me that I know I can’t overcome. We’re built for far greater things than we think.


What do you think you’d be doing if you weren’t doing what you are now?

Working at Minnesota Business is an incredible and rare opportunity, but I think of myself a bit like a ship-builder. I have the skills and the passion to build ships no matter where I am. Luckily, at the moment I am building fleets with the magazine (and feel very blessed). In the future, I know that if I do my best work, I can build ships wherever I go. My job title doesn’t define me, my strengths do.

My mentor John Pollack once told me, “When things are difficult, do not put your head down. That’s when you lift your head up and show them what you’re made of.” There have been many times I wanted to focus on simply doing my best work and fitting in. However, I wouldn’t have had the experiences I have if I didn’t choose to stand out or stand up. John has been an incredible inspiration to me.


What moment in your career are you most proud of?

The call from the White House is one I’ll never forget, and developing curriculum for state government has been incredible; however, I’m not sure I’ve reached my peak yet. I looked at the May issue of Minnesota Business and I saw my face looking back at me. That moment defined a goal and helped me mentally check-off a “to-do.” Create an even brighter future for a magazine…check. For me, I think I’ll be 98 years old and still wondering what I can accomplish.

When are you most productive?

I’m a late-night worker. I arrive at the magazine in the morning, but you’ll often see me responding to email at 9:00 or 10:00 p.m. I think best very late at night.

What is the biggest threat to your productivity?

Reading. There are a million articles I want to indulge in. I love being emotionally involved with media. I love having the voice and ability to react on GirlmeetsGeek.com.


What activities/hobbies/extracurriculars do you do now?

I love getting a night or two a month out on the town. I’m a huge fan of our opera scene and the St. Paul Chamber Orchestra. I try to spend time with my parents each weekend and my growing family. In any downtime I have, I spend as much of it as I can with my daughter and fiancé. They both keep me balanced and silly, the latter of which I think is VERY important.

Most influential books you’ve read in the past three years?

One of my favorite books is The Velveteen Principles: A Guide to Becoming Real Hidden Wisdom from a Children’s Classic by Toni Raiten-D’Antonio. There’s a tragic lack of originality in business today. The only way we can redefine ourselves is to simply be real. This book nailed the idea on the head to me. I have one edition that is so marked-up and dog-eared that I actually ordered another. I highly recommend it!