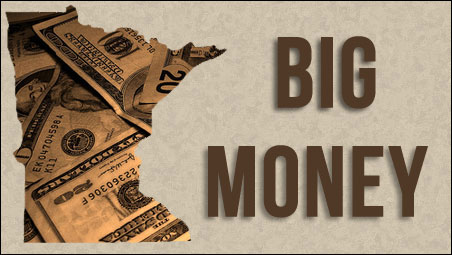 As they have across the country, Democrats and Republicans are fighting in Minnesota over redistricting. The battle has big backers and money on both sides. The Democratic strategy is funded by a trial lawyer PAC and powerful unions. And as ProPublica has previously reported, the Republican effort is being funded by an opaque group with ties to the Koch brothers, the billionaire energy magnates and powerful backers of conservative politics. But while the parties are working to redraw communities’ political maps, the communities themselves are struggling to be heard.

An unfolding legal fight in the state highlights how difficult it is for anyone outside of political professionals to have an impact in redistricting.

The stakes in redistricting are high: Parties that secure favorable district lines can lock in a political advantage for a decade, with voters often losing out in the process. (See our guide for more about the dirty tactics of redistricting.)

Because Minnesota’s state legislators and governor could not agree on a new map, the critical task of the once-a-decade redrawing of district lines is in the hands of a special panel of five judges appointed by the state supreme court. The case is being argued by Democratic Party lawyers on one side and Republican lawyers on the other, each pushing for maps likely to benefit their party.

This year, it seemed that the public would also get a meaningful say: The redistricting panel held hearings and invited citizens to submit their own maps. But public comment closed in October, before the court-appointed panel even announced the criteria it would use to determine Minnesota’s districts.

The political parties, on the other hand, have until Nov. 18 to submit their final maps. And only the parties involved in the formal redistricting lawsuit are able to comment on each other’s map plans and make their final arguments directly to the panel of judges.

“The critical state in the process is when there are actually maps, to review the maps and say what’s good and what’s bad,” said Mike Dean, the head of Common Cause Minnesota. But at this point, “the public can’t weigh in.”

As part of Common Cause’s nationwide effort to encourage more citizen participation in redistricting, the organization’s Minnesota branch will solicit public comment on the parties’ plans, and has also sponsored a contest for citizen-drawn district maps.

Dean said the contest is being judged on widely accepted principles of redistricting, including compactness and the preservation of both existing city boundaries and community lines. With 35 viable entries, the winning map will be chosen by a bipartisan panel that includes three former state politicians and a prominent professor of political science. Common Cause has asked the court for permission to submit the public comments along with the winning map for consideration alongside the maps and arguments produced by party insiders.

Opposed by GOP
The move has been opposed by Republican lawyers, who have argued that the period for public comment has closed.

“Common Cause wants to come in after everyone else has shot their wad, so to speak,” the lawyer for Minnesota’s Republicans, Eric J. Magnuson, told ProPublica. “They have already had a lot of input, and now they want to have additional input.”

Common Cause has asked to submit both map and commentary in the form of an amicus brief, a way outside parties can weigh in on legal matters.

Some of those involved in the lawsuit were skeptical that Common Cause could bring an unbiased public perspective into the deliberations. Magnuson, a former chief justice of the Minnesota Supreme Court, said Common Cause has been inaccurately portrayed as nonpartisan. “I don’t think of them as independent.”

The Democrats’ redistricting point person, Ken Martin, chairman of the state Democratic-Farmer-Labor party and one of the plaintiffs in the case, was traveling out of the country and unavailable for comment.

“This is [Common Cause’s] partisan position. To pretend it’s somehow a ‘friend of the court’ is nonsense,” said Alan Weinblatt, a former attorney for the state Democratic Party who is involved in the suit. Weinblatt said he is representing not the party but rather “the best progressive interests.”

The day after Common Cause filed its amicus request Nov. 8, Magnuson filed an objection to the request, arguing that Common Cause should have either become party to a lawsuit as the Republicans and Democrats did, or timed its contest so that the winning map could have been submitted during public comment period.

Dean said Common Cause waited to submit its citizen-drawn map because it wouldn’t have made sense to do so before the state’s redistricting panel released its criteria for judging the maps, even though that meant waiting until after the window for public comment passed.

“I wanted to give people a chance to amend their maps in light of the new criteria. Otherwise, they were trying to do it in the dark without knowing what the principles would be,” Dean said, arguing that the input is crucial. “The court is not an expert on every part of Minnesota. When you divide a community, the only people who know a community is divided is the community itself.”

He said the group doesn’t have the kind of money it would need to intervene in the redistricting lawsuit as a plaintiff. “You have to hire a full-time attorney, and it can run into the hundreds of thousands of dollars,” Dean said. The group’s redistricting efforts are funded with a $50,000 grant from The Joyce Foundation, whose public policy efforts include the overhaul of campaign finance, as well as $30,000 in dues from its more than 3,000 Minnesotan members, he said.

Deep DFL pockets
Like the state Republican Party, Minnesota’s Democratic-Farmer-Labor Party also has big pockets behind it. Mark Elias, one of the attorneys representing the state Democratic Party before the panel, is general counsel of the National Democratic Redistricting Trust, an entity established by the national party that sought and was granted permission by the Federal Election Commission to keep its donors secret.

Although the trust does not have to disclose how much money it has raised or the identity of its donors, a few donors have listed the trust on their own campaign-finance disclosure forms, including a committee funded by the Carpenters and Joiners Union, which gave the trust $250,000; an anti-tort-reform PAC funded by trial lawyers, which gave $100,000; and the International Longshoremens Association PAC, which gave $15,000.

“Let’s face it,” said Larry Jacobs, the director of the University of Minnesota’s Center for the Study of Politics and Governance, “the insiders have all the cards, and the people on the outside have pea shooters.”

Jacobs will be judging Common Cause’s map contest along with three state politicians: one Democrat, one Republican and one independent.

He called the redistricting battle “an unfair fight.”

“You have a party establishment with the highest-quality, best-paid lawyers in town — and across the country — showing up to make these persistent arguments,” Jacobs said. “Even on the rare occasions when you have a citizens group that can get organized and get their paperwork in, the reality is that there’s already someone who’s beat them to it.”

Whether an amicus brief to the court is the correct vehicle for the kind of input Common Cause wants to provide is still an open question. Amicus curiae, or “friend of the court” briefs, provide additional information that would not be contributed by any of the parties in a lawsuit.

“To suggest that citizens shouldn’t be heard is probably a fine legal argument, but as a moral question, it’s a little offensive,” said Keesha Gaskins, a redistricting expert at the Brennan Center for Justice and former executive director of the League of Women Voters Minnesota. “Is it a proper format? The court will decide that.”

“I think it’s unfortunate that this is really one of the few avenues left for us to get the citizens’ voice in there,” said Laura Fredrick Wang, who now heads the League of Women Voters Minnesota. “The fact that this is what it comes down to speaks volumes about why we need to reform the process.”

Citizens’ input
The League had helped set up another effort to get citizens’ input on the redistricting process, collecting opinions from roughly 300 people. Although they worked with a mapping consultant, they didn’t have enough time to make a definitive map based on the perspectives they had gathered, Wang said. The map they submitted by the public comment deadline had to be more tentative.

While members of the public were invited to submit maps, former state senate Democratic majority leader Larry Pogemiller said some individuals who had the technological sophistication to create viable maps were asked not to do so by the political parties — with what he assumed was the goal of minimizing the alternatives to the parties’ own maps.

Pogemiller, who has advocated the creation of an independent redistricting commission, said that while he could not provide details, “absolutely there’s an attempt to try to get fewer maps submitted.”

The chairman of the state Republican Party did not immediately respond to a request for comment.

By Lois Beckett and Olga Pierce