Over the past year, we saw the fallout of George Floyd’s murder by a then-Minneapolis police officer continue to influence the public safety landscape across the Twin Cities and statewide — more than two years after it happened.

Minneapolis came into the year fresh off the failure of a ballot initiative to dismantle the Minneapolis Police Department. Residents were still focused on reforms, while others pointed to rising crime as a more immediate concern (though it didn’t play out that way in November’s election).

Here are six stories from the past year that summed it all up:

The Minnesota Department of Human Rights in April released a scathing report finding that the Minneapolis Police Department engaged in a decade of discriminatory policing.

The pattern-or-practice investigation, which began days after Floyd’s murder in 2020, found that MPD officers were more likely to stop, cite, arrest and use force against residents of color, particularly Black residents. It also found MPD officers consistently used racist, misogynistic and disrespectful language, and that officers used social media to covertly surveil Black residents and organizations.

The report detailed an organizational culture within the department that failed to hold officers accountable for misconduct and led to inappropriate use of force.

After several starts and stops in negotiations between the Minnesota Department of Human Rights and the city over the summer, the two sides are working on crafting a court-enforceable agreement known as a consent decree that will feature changes required to be carried out by the city. The Department of Justice’s civil rights division is conducting its own pattern-or-practice investigation into MPD, which is expected to yield its own findings next year. 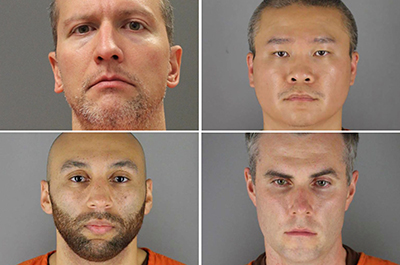 Two years after Floyd’s murder, the proceedings aimed at holding the officers involved accountable are finally reaching their conclusion.

Derek Chauvin in 2021 was convicted of Floyd’s murder and sentenced to 22½ years, and later pleaded guilty to federal civil rights charges. The federal proceedings for the other three officers involved – Tou Thao, Thomas Lane and J Alexander Kueng – began at the start of this year.

After about a month of testimony and two days of deliberations, the federal jury returned three guilty verdicts. Lane is currently serving 2½ years in federal prison, Kueng received a three-year sentence and Thao 3½.

Kueng and Thao were expected to stand trial for state aiding and abetting murder and manslaughter charges in October, but Kueng pleaded guilty to the manslaughter charge as the trial was set to begin and had the murder charge dismissed, receiving a three-year sentence for failing to intervene. Thao opted for a stipulated evidence trial that put his fate in the hands of a judge instead of a jury, which is still pending. 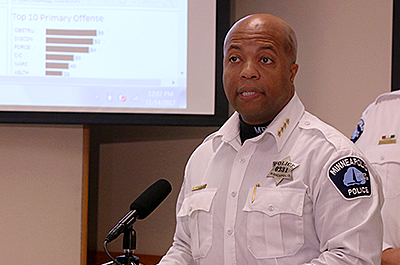 Arradondo, the first Black police chief of Minneapolis and the chief who oversaw the fallout of Floyd’s murder, stepped down in January.

He first joined the department as a patrol officer in north Minneapolis in 1989, rising up the ranks to inspector in 2013 and then chief in 2017. He replaced Janeé Harteau, who was fired following the fatal police shooting of Justine Ruszczyk Damond by then-MPD officer Mohamed Noor.

To many, Arradondo was to be a solution for relations between the police department and many residents who saw the agency as biased and untrustworthy. But the tumultuous final 18 months of his tenure were marked by a police killing that sparked a global reckoning on racial justice and efforts to dismantle his department.

The former chief caught flack just before announcing his exit for appearing to campaign against the ballot measure to dismantle the police department in his official capacity, holding a news conference denouncing the initiative days before Minneapolis residents would vote on it.

Killing of Amir Locke during no knock raid

On an early February morning, a Minneapolis police SWAT team executed a no-knock warrant at a downtown Minneapolis apartment building that ended in one of the officers fatally shooting 22-year-old Amir Locke, who was sleeping on his cousin’s couch when officers burst in and was not the target of the warrant.

The killing reignited feelings of outrage and pain over the killings of Floyd and Daunte Wright, a 20-year-old Black motorist who was killed by then-Brooklyn Center officer Kim Potter. It also renewed scrutiny on the use of no-knock warrants, and Minneapolis announced new restrictions on the controversial practice in November 2020 in response to Floyd’s murder.

Minnesota saw a steep decline in the use of no knock warrants following Locke’s death as several agencies barred the practice, dropping to single digits at the end of April. But data showed that racial disparities remained within the use of the practice, with Black residents disproportionately targeted.

No charges were filed against the officer who shot and killed Locke, who was Black.

What’s the deal with crime?

Crime was an issue on everyone’s minds across the Twin Cities this year, remaining at relatively elevated levels following a spike in criminal activity in cities across the nation coinciding with the start of the pandemic in 2020.

Minneapolis was no exception, and specific incidents like shootings downtown on the Fourth of July put pressure on local and state officials to address the issue.

In addition, police departments’ inability to sufficiently respond to those 911 calls further thrust police staffing issues into the spotlight. Gaps in staffing left by a wave of retirements, resignations and disability leaves at departments across the metro following civil unrest sparked by Floyd’s murder persisted, prompting police agencies to ramp up recruitment efforts.

Late in the year, Frey and Cedric Alexander, the city’s new community safety commissioner launched “Operation Endeavor” — a crime reduction plan involving several agencies like the Hennepin County Sheriff’s Office, the state Department of Public Safety and the FBI. While crime rates have fallen since the start of the operation in October, it’s difficult to prove the plan was the cause, as a dip in crime rates historically coincides with a drop in temperatures during the late fall and winter seasons.

Republicans and some moderate Democrats also pushed crime as an election issue. But that strategy did not appear to pan out as the DFL won a trifecta last month, keeping control of both the governor’s office and the House and taking control from the GOP in the Senate. 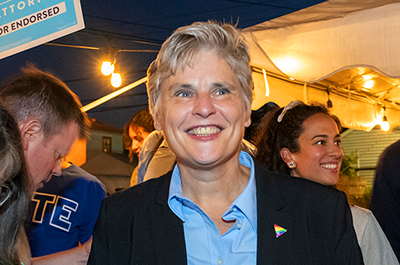 Speaking of tough-on-crime messaging having a limited effect on voters, a similar dynamic played out in the race for Hennepin County Attorney.

Dimick was lifted up as the “tough on crime” candidate, while Moriarty pledged to prosecute violent offenders but focus on preventing violence early on and dismantling racial disparities within Hennepin County’s court system.

The race for the open seat – vacated by the retirement of longtime prosecutor Mike Freeman – drew much more attention than in previous cycles, namely due to the concern of rising crime and an increased desire for criminal justice reform among the electorate after Floyd’s murder.