Savanna Farmer, a social worker embedded within the Golden Valley Police Department, said her day starts at roll call with the department’s officers.

She gets referrals from officers who came across people the night before or over the weekend in need of social assistance. When Farmer gets a call while in the office, she’ll sometimes join officers and show up on the scene to provide outreach right away, including to people who are experiencing homelessness.

“Sometimes the calls tend to be for people in the community who are homeless so the traditional outreach by phone or letter would not be effective,” she said. “So I am going out on scene and providing those resources in real time – either taking them to the Behavioral Health and Wellness Center, calling to see if there’s an open shelter bed or getting them connected to food assistance and things like that that can be stabilizing longer term.”

Beginning next year, more residents across Hennepin County will have access to that kind of response when the county expands its embedded social worker program. Starting at just five social workers three years ago, the program will now have nearly 10 times that number of social workers available to work alongside officers in all 45 cities across the county to more quickly provide resources to residents in need.

The program is one of several pilot programs the county hopes to institute as a way to better connect people with social services.

It is also an effort to limit armed police responses to every 911 call and prevent deeper involvement with the criminal justice system — an approach that more residents called for following the murder of George Floyd by a then-Minneapolis Police officer.

The Embedded Social Worker program is one of many initiatives crafted by the county’s health and human services officials, and stakeholders from across public safety agencies that included law enforcement, corrections officers, judges, county attorneys and public defenders. The goal of the strategy is to improve outcomes for individuals experiencing mental health issues and substance abuse disorders who come into contact with police and end up tangled up in the criminal justice system.

From that came the embedded social worker program, which puts a social worker within a police station, in an effort to reduce law enforcement contacts, get people connected to services and prevent people from unnecessarily getting involved with the courts. The program began in 2019 with just five social workers, which steadily increased each year. In 2023, police departments in every city across the county will have access to 45 social workers. 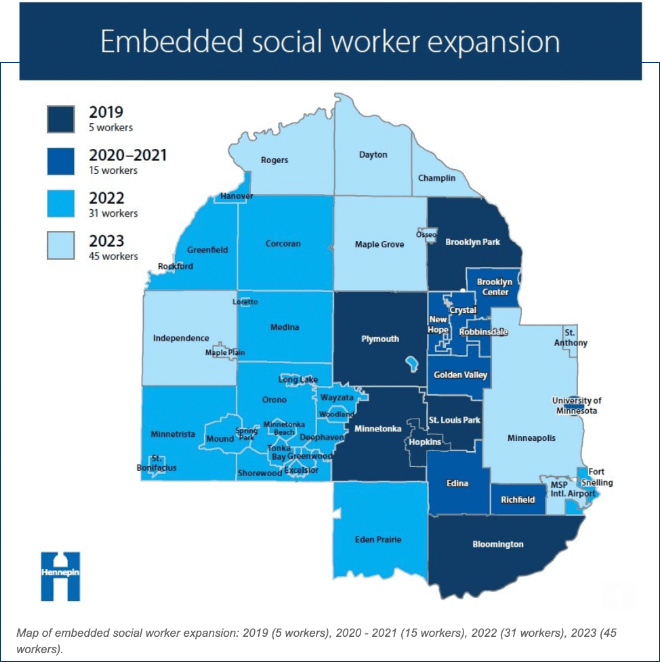 Leah Kaiser, director of Hennepin County’s behavioral health programs, said the county decided to expand the program because it’s seen positive results. The program’s growth was also due to the county’s residents asking for alternative responses to calls that would traditionally involve law enforcement, she said.

“Post-George Floyd, there has been a growing awareness and a growing desire on behalf of communities to bring the services such as the embedded social worker closer to the 911 response,” she said. “It’s really in response to community and really focused on what is the current resident experience and what can we do in partnership with others to improve that resident experience.”

Following the global outrage sparked by Floyd’s murder at the hands of a then-MPD officer, cities and police departments nationwide have been exploring alternative responses to armed law enforcement.

Minneapolis launched several pilot programs, including a behavioral crisis response team featuring unarmed mental health professionals to respond to calls from people experiencing crises. Mayor Jacob Frey’s budget, which was adopted by the City Council earlier this month, provides $1.45 million in 2023 and $2.9 million in 2024 to expand the response team.

A day for an embedded social worker

Golden Valley is home to many elderly people who are living alone, so often, Farmer’s work revolves around connecting them with county services in order to help maintain their safety and independence.

But every department has different needs, and the expertise of social workers within those communities are tailored to meet those needs. In Bloomington, for example, an embedded social worker was able to help a child having behavioral problem at school, as well as help their parent find support and ultimately prevent the situation from escalating, said Adesola Jaiyesimi, an area manager with the county’s Justice Behavioral Health Initiative.

“We have social workers who are dedicated to ensure that people are equipped — whether it’s with skills, whether it’s with information, whether it’s that they are connected to the resources that are available in their community, that they are supporting them in that way,” she said. “That then diverts calls to law enforcement and really allows for a “right person, right time” kind of approach to be in place.”

Kaiser said that while the embedded social worker program has been a success so far, it won’t solve all of the issues with the current 911 response apparatus due to the diversity of needs of residents who call. That is why the county is developing and trying other pilot programs to create even more tailored responses that meet residents’ needs.

One of those pilot programs began this month in Brooklyn Park, where a community paramedic is paired with a social worker to respond to mental health calls to provide assistance to individuals experiencing behavioral health crises before it escalates to an emergency situation requiring police. The alternative response team, modeled after a similar program in Denver, will handle calls that a 911 dispatcher flags as urgent but isn’t potentially violent or involving weapons, including welfare checks, self harm, indecent exposure, trespassing, and low-level mental health and substance abuse concerns, among others.

“It isn’t just sort of the single ‘yes we’ve done this, we’ve arrived and checked the box, and we move on,’ but we’re constantly looking back at what else can we be doing to improve resident outcomes, what is national best practice telling us, and what is our data showing us,” Kaiser said. “We’re going to keep tailoring our systems in ways that we think will achieve those outcomes and use our resources effectively.”