Hashim Yonis has been to a lot of funerals lately. The most recent was for his friend Fuad Ali, a 31-year-old Somali-American businessman who was shot dead in Minneapolis last week.

It was Ali’s killing that drew Yonis and a somber crowd of nearly two dozen Somali men and woman and members of local law enforcement to the Safari Events Center near East Lake Street Friday night. Ali had been buried earlier that day and the crowd was thin at the usually bustling event hall. But a handful of community members — mostly young — showed up to grill law enforcement about a spike in bloodshed in their community.

Ali’s slaying comes after three young Somali men were shot and killed this summer — two in Minneapolis and one in Burnsville — in incidents many in the community believe were gang related. In another case in October, an elderly man was convicted of beating to death a fellow Somali man in his apartment, but no arrests have been in any of the shootings, police spokeswoman Cyndi Barrington said.

It’s been five years since a similar string of gang-related killings in Minneapolis led to a groundbreaking meeting with the Somali community and the Minneapolis police department. Now again, community members say they are afraid to go outside of their homes for fear of getting caught in the middle of gang activity. Other slayings have seemed more random.

“That could have been me,” Yonis said. “I’m really sick and tired of going to burial sites and burying my friends. I knew almost all of them very well.”

He was a father of two — with one more on the way — and owned two event centers in the city. He attended the University of Minnesota and was cherished by the arts community, which used his center for performances. Police are following several leads in the case, Barrington said, but there have been no arrests.

“He was a true, good American who immigrated here and started his own business. He was a hard worker,” said Basim Sabri, the largest immigrant landlord in the state. Ali was a tenant. 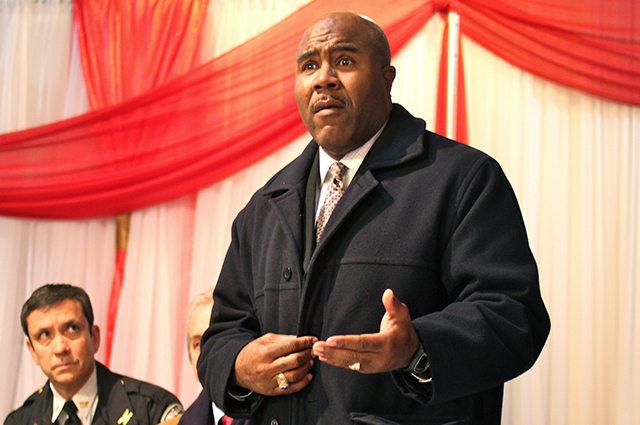 MinnPost photo by Briana BierschbachMinneapolis homicide investigator Charlie Adams: “We can’t do it all by ourself. We need your help.”

In an unprecedented move in the Somali community, Sabri is offering a $15,000 reward for information that could lead to the capture of Ali’s murderer and $15,000 more if there’s a conviction. He’s willing to spend more if that’s what it takes to catch his shooter.

“You know how people say nice things about people just because they have died, well that’s not the case here,” Sabri said. “He was truly a good man.”

Those gathered at the event center asked police if any of the shootings were close to being solved. Yonis asked if there was a better way to release information about murder investigations. Some members of the crowd even asked if the police could share the names of suspected gang members in their own community.

“I want the police to be knocking on doors and turning over beds to catch these guys,” said Shurkri Hassan, who moved from Minneapolis to Columbia Heights because of the violence. Hassan said the community has held dozens of similar meetings, but the violence continues. “When will I hear that my brother is the one who was shot, or my son, who is growing up? That is what I fear.”

The police had frustrations, too. In many cases, members of the Somali community were too afraid of retaliation to come forward with information to help solve the murders.

“One woman told me she was more afraid of what her community would to do her than she was afraid of the government,” homicide investigator Charlie Adams said. “We can’t do it all by ourself. We need your help.” 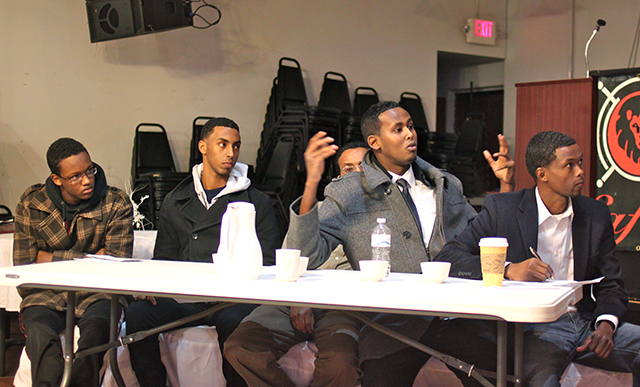 Law enforcement officials said they were making strides in working with the Somali community. The department hired Mohamed Abdullahi and Abdiwahab Ali — the first Somali officers in the state — to patrol the densely Somali-populated Cedar-Riverside neighborhood.

“I like how you are challenging us,” Abdullahi told the crowd. “I’m a Somali person first. I’m a part of this community too.”

Police also had some good news: There are new leads on two of the murders. That was the first update many in the community had heard in months, and it sparked a dialogue on what they could do to help the police solve these crimes.

Somali activists now plan to meet with law enforcement officials monthly, and they are trying to organize a community response team to help police solve cases.