On the east side of Barnesville, in a grassy lot soon to be surrounded by homes, a sign picturing silhouetted children doing summersaults announces that the site will soon be a neighborhood park – the 12th park in this small town in western Minnesota.

This summer the city plans to spend $250,000 on maintenance and new equipment in its park system. For civic leaders here, that’s money well spent. More than simply places of recreation, the parks serve as a kind of welcome mat for young families who might be considering a move from the city to the country.

Since 2000, Barnesville has been attracting new residents at a steady pace, growing 18 percent to its current population of about 2,500. The median age of its residents is 36 years – slightly lower than the state average. Twenty-five houses are being built this year while a dozen more are planned, so far, for next year.

Not surprisingly, Barnesville’s proximity to Fargo-Moorhead is a big factor in its stability. Many residents have easy commutes to jobs in those conjoined cities, which are just 25 miles away, traveling on Interstate 94, the thoroughfare that began to transform this town when it was extended through the region in the 1960s.

Yet residents bristle at the dismissive “bedroom town” label, arguing that it doesn’t reflect the sense of identity and depth of community pride in this Clay County town. They note that the city has its own high school (not a consolidated version), its own newspaper, thriving churches, and all those parks (plus a golf course). It has the headquarters of a business software company. Its old-school café is complemented by a pub-style bar-and-grill.

Moreover, Barnesville is separated from Fargo-Moorhead by farm fields and a few hamlets – not layers of suburbs.

Consequently, the city has been able to retain a certain cultural distance from the nearby metropolitan region that allows it to retain – and promote – its small-town feel.

“We don’t like the term ‘bedroom community,’ ” said Gene Prim, who doubles as mayor and as publisher of the paper, the Record-Review. “We’d like to think we’re more than that.”

Many cities across Minnesota work hard to create a “brand” for their community – that unique feel or idea about a place, often based on location – that might attract new residents. And to be sure, Barnesville takes advantage of its place in the Fargo-Moorhead metropolitan area, which has a population of about 230,000, and the general ease of commuting to those two cities. It’s certainly a draw for people who live here.

“It really is that sweet spot – to be close enough (to a metropolitan region) but yet far enough away,” said Karen Lauer, who has served as the executive director of the Barnesville Economic Development Authority since 1993. “We’ve really tried to capitalize on that.”

The city spends about $20,000 annually to get the word out to potential residents, most notably through advertisements in the regional media and at home shows in Fargo. A full-page advertisement that appeared in the most recent issue of Inspired Home, a magazine published by the region’s largest newspaper, the Forum of Fargo-Moorhead, read “where life is simply good: Barnesville.” 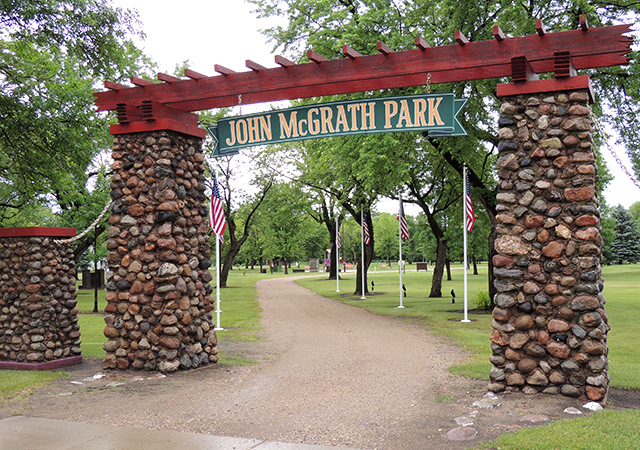 MinnPost photo by Gregg Aamot
John McGrath Park is one of 11 parks in Barnesville. A 12th is planned.

The city also touts a full range of services for would-be residents, including fiber optic internet service available to every home and business.

The region, Lauer said, is full of young people who grew up in small towns in Minnesota or North Dakota, went to college in Fargo-Moorhead and then landed jobs there. When those people start to look for something different, often when they begin having families, she said, “we want the first town they think of to be Barnesville.”

“We have tried to create a top-of-mind awareness” about the community, she said.

Brad Field has been witnessing the change in Barnesville for decades. He moved here in 1974 to work at Wells Fargo, eventually serving as the local bank’s president for 16 years. These days, he works in agricultural finance, spending many days with clients in and around small towns in Minnesota and North Dakota. 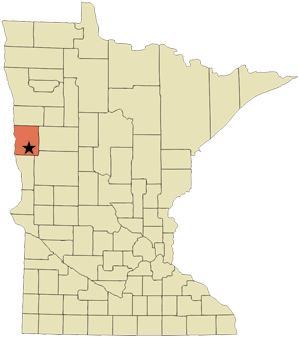 Field, active in community organizations throughout his career, including the Economic Development Authority, remembers having discussions about the community’s direction in the years after he arrived.

“We realized many years ago that our biggest advantage was being close to Fargo-Moorhead,” he said. “It was also our biggest disadvantage,” he added, noting the concerns about the “bedroom town” perception.

The emphasis, Field recalled, quickly focused on parents with young children – people who wanted open spaces, small class sizes, perhaps the kind of tight-knit community feel they remembered from their youth. Interstate 94, which brushes the northeast edge of town as it slices through Minnesota from the southeast to the northwest, presented commuter possibilities.

“Our concentration would become residential growth geared toward young families,” he said. Hence, all the attention to parks. One of the largest, John McGrath Park, on the west side of town, includes an American flag-lined walkway, a disc golf course – and a splash pad for the kids.

Pam and Dean Aakre were living in Fargo when they moved to a house near Barnesville in 1990. The biggest draw, Pam Aakre said, was the school system; Dean Aakre had grown up in the area and graduated from Barnesville High School.

“We didn’t want our kids to get lost in the school system,” Pam Aakre said. “We wanted them to participate and get involved in things, and we knew the student-to-teacher ratio would be good.” 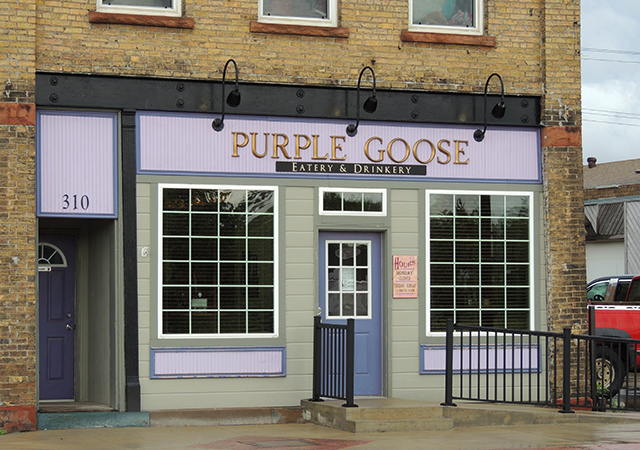 The Barnesville School District, which graduated 59 students this year, claims that it was the first district in Minnesota to provide each K-12 student with an iPad. Aakre said each of her children found a niche – whether in sports, music, speech and debate or Spanish club.

Empty nesters now, the Aakres do what they can to support local restaurants – including the Purple Goose, the pub located in the city’s downtown – and the sole local grocery store, the Barnesville Super Market. The Dollar General store, which came to town a few years ago, is a good place to buy small items. A Caribou Coffee kiosk at a local convenience store upped the quality of coffee in town.

Said Field: “The thinking had to change from, ‘Let’s just keep it the way it was’ to ‘Let’s strive for some of the amenities larger communities might have.’”

Bedroom communities or not, many small towns in rural Minnesota benefit from their proximity to small cities like Brainerd, Willmar and Alexandria – what demographers call “regional centers.”

Ben Winchester, a rural sociologist with the University of Minnesota Extension, said Minnesota has more regional centers than many other states, providing people in rural areas with a lot of options about where to live and work. He said their growth represents the modern way of life – with its technology and traffic-light commutes and two-income households – that increasingly marks life in rural areas.

“It’s the regional nature of our lives these days,” Winchester said. “People just don’t live and work and shop and play in one town anymore.” At the many presentations he gives to organizations around the state, he likes to proclaim, “Hey – this isn’t ‘Little House on the Prairie’ anymore!”

Many of the people living in the towns in the Fargo-Moorhead region represent these “regional lives.” 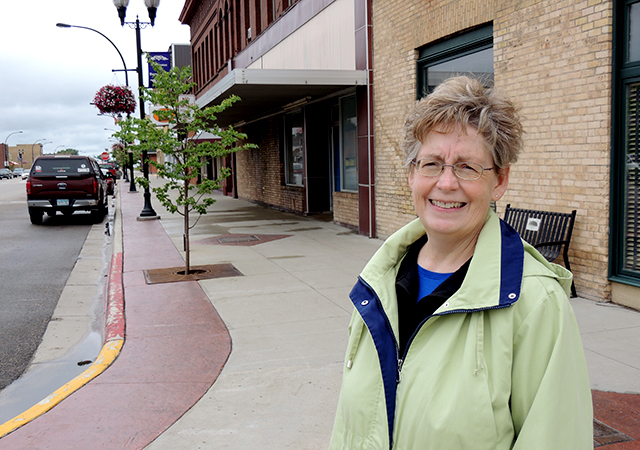 Those communities also benefit from a low unemployment rate, which was 2.1 percent in the Fargo-Moorhead metropolitan region in May. That was a percentage-and-a-half point lower than the U.S. average and lower than Minnesota’s statewide average of 2.5 percent.

Pam Aakre, for her part, goes to Fargo-Moorhead two or three times a month, sometimes for the quilting supplies that aren’t available in Barnesville. Sometimes, she shops in Fergus Falls or Detroit Lakes, which are each about 30 miles away. Dean Aakre works at North Dakota State University, in Fargo, as a 4H youth specialist.

Prim, the mayor-publisher, first went to work for the Record-Review in 1960 and remembers when Barnesville was home to three implement dealerships and five grocery stores. Today, there are no implement dealerships here; there is one grocery store and few retail outlets. The late 1970s and early ’80s were particularly difficult times for the city, Prim remembers, with high interest rates hurting the region’s farmers.

“We’re coming back,” he said, sitting in his office, with mounted animal trophies – from Minnesota hunts as well as African safaris – hanging on the walls and papers covering the desk. “It’s not what it was before. The retail isn’t what it was, which isn’t a particularly good thing for newspapers.”

Field said that when he moved to town “you didn’t need to leave Barnesville to get what you needed.” Now, many of the businesses along the city’s main street, as in many small towns, are service-oriented: insurance agencies, realtors, auto body shops.

One sign of this change is Stoneridge Software, a technology company that arrived in 2012 and is currently remodeling an 1899 building along Front Street, the main street through the downtown. A Microsoft partner firm that implements and supports business technology, Stoneridge employs about 25 people at its Barnesville location. 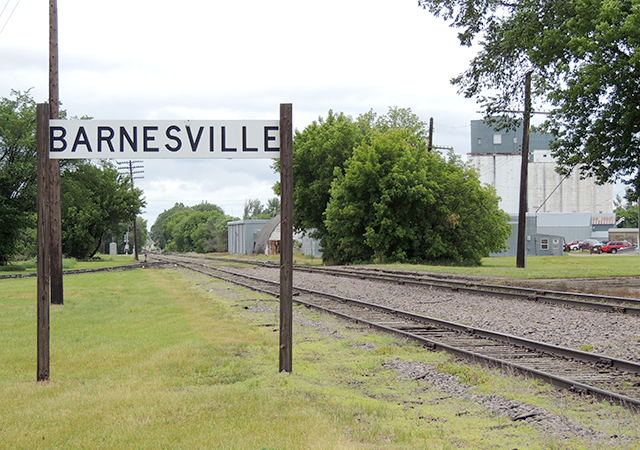 MinnPost photo by Gregg Aamot
Barnesville, in Clay County, has a population of about 2,500.

Pam Aakre used to report for the Record-Review and now serves on the board of the Barnesville Area Community Fund, which provides business loans and scholarships for students, among other things. So she’s tuned into the city’s past and present. While she’s happy about its direction, she doesn’t take it for granted.