News
Rural Dispatches
Rural Dispatches is a yearlong series about the challenges and opportunities in Minnesota’s small towns, made possible by a grant from the Blandin Foundation.
June 26, 2015

MORRIS, Minn. – In his regular travels to small Minnesota towns, where he discusses economic and demographic trends in rural areas and takes the pulse of local leaders, Kelly Asche hears a common lament: Too many young people are moving away. While it’s an understandable and real sentiment, he refuses to join in the despair.

“For some reason, people often think that success means keeping all of their 18 year-olds – that they have to have every single age group in town completely engaged,” said Asche, a program coordinator at the Center for Small Towns, a branch of the University of Minnesota, Morris.

“We want to broaden that perspective.”

For many leaders in Minnesota’s smallest places, the conventional wisdom about rural Minnesota – that its small towns are stagnant; that it offers little cultural richness; that all the kids grow up and move away – has long felt frustratingly overdone.

Changing that perception, and the harm it does to civic pride and initiative, has become part of the mission of the center, which is celebrating the 20th year since its founding in this college town of 5,300 in Stevens County.

“It’s hard to get people to look at what they have as assets,” Asche said. “I don’t know if that is part of the Minnesota sensibility or what, but we don’t like to give ourselves credit for the things that we have and the things we can do.”

In his many presentations before civic groups, where Asche gets a chance to buoy spirits, he draws on the research of Ben Winchester, a demographer at University of Minnesota Extension whose work has shown a “brain gain” – a re-migration of young adults – in many parts of rural Minnesota, as well as an increase in the number of social organizations in rural areas. Beyond those numbers, Asche points to the work of small-town artists and writers, the efforts of small communities to integrate recent immigrants, and the impact of technology on employment as signs of rural vibrancy.

The result, Asche and his colleagues hope, will be a fairer, nuanced and more hopeful discussion of 21st-century rural Minnesota.

“We are certainly not here to say that everything is great,” he said. But, he added: “The discussion is often framed as, ‘Oh, we need to do something to help small towns!’ ” A more meaningful starting point, he argued, would begin with a recognition that “there is a load of talent and social capital right here (in rural areas) that needs to be tapped into.”

The Center for Small Towns, which is housed on the second floor of the Welcome Center, a tidy, tree-shaded brownstone, opened in 1995 as a community outreach program, a place where academic work met the needs of the communities surrounding the university. It has since grown into a kind of regional think tank and gathering place, at the forefront of a deeper exploration of the economy and culture of rural life.

In early June, 360 people attended the center’s 2015 Rural Arts and Culture Summit. If a theme emerged, said Kerri Barnstuble, who also works as a program coordinator at the center, it was this: “We are here, in this creative space, by choice.” 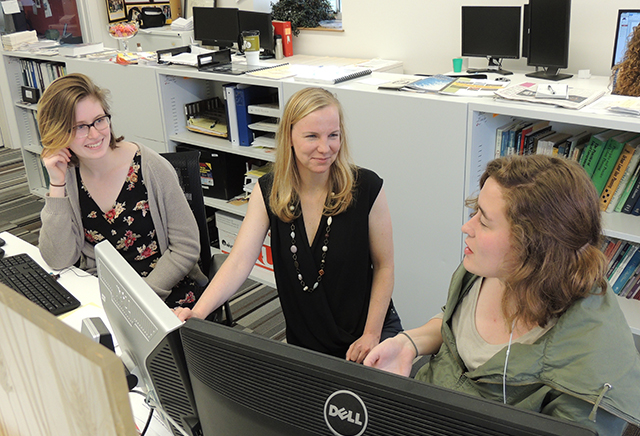 Former U.S. Rep. Tim Penny, who leads the Southern Minnesota Initiative Foundation in Owatonna, said the sought-after pace and open spaces of life in rural Minnesota, mixed with the flexibility that technology now affords modern workers, is an attractive combination that has spurred a fresh way of thinking about rural change.

“In some sense, there was this desire to re-create what we once had, which was not realistic. And there was a resentment about what others had, particularly those in regional centers,” Penny said. “Now, I think we have set that aside and have moved toward a more optimistic phase.”

Penny mentioned the success of Lanesboro, the arts-inspired, bluffs-surrounded hamlet in southeastern Minnesota that has become a center for theater and recreation. It reminded him of a comment he made some 20 years ago at a retreat – a remark that sounded naïve then but prophetic now. “I said, ‘Here is what I see. I see the New England of the Midwest right here. There is every reason we should be a destination as a region.’ Now, I think that is happening.”

On a quiet Friday morning in mid-June, in the Center for Small Towns’ open work space, a handful of students sat at rows of computers, divided by shelves packed with books and supplies, working on various projects.

Senior Natasha Miller read through several community newspapers as part of an analysis of news content conducted with the Minnesota Newspaper Association. Miller placed stories into categories like “Spiritual, Recreational, Cultural” and “Infrastructure and Services,” creating a document that the newspapers can use to better evaluate their coverage.

Other student-led projects have included an initiative to ensure that local businesses are identified correctly on Google Maps and research into the types of incentives municipalities sometimes use to recruit residents, such as temporary free utilities.

Asche and Barnstuble regularly travel to small towns – usually within a 90-mile range of the university, though sometimes farther away – to meet with local leaders and present the center’s findings. (Winchester, meanwhile, is in high demand, presenting his “brain gain” findings and other research to groups across Minnesota and in other states). 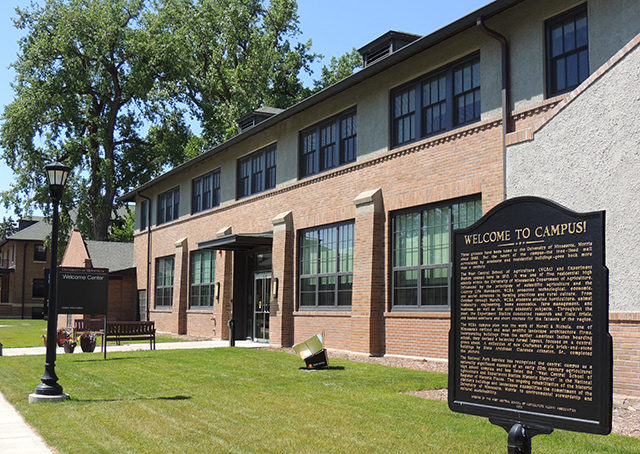 MinnPost photo by Gregg Aamot
The Center for Small Towns, which was founded in 1995, is housed on the second floor of the Welcome Center at the University of Minnesota-Morris.

Last fall, Asche took the center’s message to Grand Marais, the scenic town of 1,300 on Lake Superior’s North Shore, at the behest of Mayor Jay Arrowsmith DeCoux, who learned about Asche’s work over a cup of coffee when Asche was staying at DeCoux’s bed-and-breakfast.

DeCoux, a young mayor at 32, said, optimistically, that “rural Minnesota sells itself pretty well.” Even so, recalling his upbringing in tiny Medford in southeastern Minnesota, he said an attitude of resignation, even cynicism about new ideas, often affects small-town thinking.

“We are fighting against the idea that everything has gone so far downhill that things just can’t be like they were ‘back in the day,’ whenever that might have been,” DeCoux said. In some circles, he said, the party line is: “Grand Marais in the 1950s? Yep, that’s the best it ever was!”

Busy on the prairie

Asche – who keeps a discussion of rural life going on the center’s blog – is an apt spokesman for the new narrative.

After living for a decade in St. Paul, where he worked as the executive director of the Minnesota State University Student Association and earned a degree from the University of Minnesota’s Humphrey School of Public Affairs, he took a job at the Center for Small Towns, which is located just a few miles from Hancock, the hamlet where he grew up. 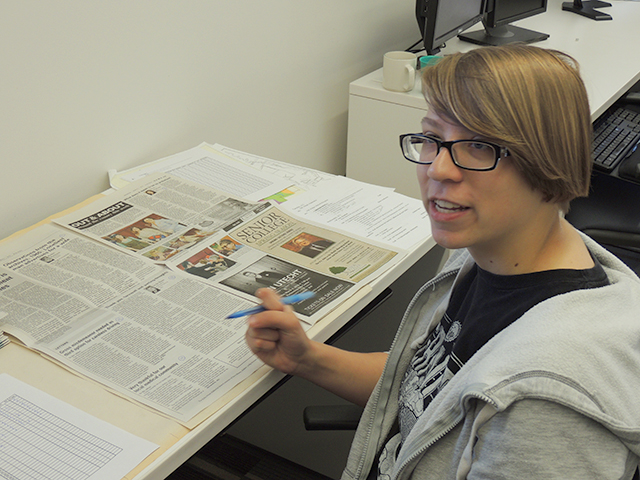 MinnPost photo by Gregg Aamot
University of Minnesota, Morris senior Natasha Miller works on a content analysis of community newspapers at the Center for Small Towns.

He and his longtime girlfriend found a home in New London, in Kandiyohi County, where Asche, along with a friend, has opened a brewery and taproom on the side. He drives an hour one-way to Morris (“I just turn on satellite radio, there’s no traffic …” he muses), promotes the center’s work across the rural landscape and hosts bands at the brewery on weekends.

Often, acquaintances or old friends ask him what he can possibly be doing now that he has left the Twin Cities for life on the prairie. He laughs.

“Usually,” he said, “I just tell them: Sorry, I am too busy to respond to you right now.”

The research of Ben Winchester

In working to change the narrative about rural Minnesota, the Center for Small Towns uses data gleaned from the research of Ben Winchester, a demographer with University of Minnesota Extension, a closely linked agency. Here are two key categories from Winchester’s findings:

The ‘brain gain’: In 2009, Winchester released an attention-grabbing report that showed a net gain, between the years 1990 and 2000, of residents 30 to 49 years old in 61 of Minnesota’s 67 rural counties. In other words, more people in that age range lived in those counties in 2000 than lived there in 1990, a trend that helped to offset losses of high school graduates. An updated report from 2012 showed a similar trend between the years 2000 and 2010. Surveys and focus groups pointed to the following top reasons for the trend: a desire for a simpler life; safety and security; affordable housing; outdoor recreation; and, for parents with children, quality schools. More information can be found here: The Brain Gain.

Social capital: Winchester has also pulled together data that showed an increase in the number of nonprofit organizations in rural Minnesota in the first decade of the 21st century, a sign of healthy “social capital.” While the population of the most rural counties decreased by five percent between 2000 and 2010, for instance, the number of nonprofits in those counties increased by 14 percent. Some of the newer nonprofits include everything from locally grown food groups to trail maintenance clubs.

Toward a new narrative: How the Center for Small Towns crafts a different rural story