News
Rural Dispatches
Rural Dispatches is a yearlong series about the challenges and opportunities in Minnesota’s small towns, made possible by a grant from the Blandin Foundation.
July 24, 2015

PRINCETON, Minn. – Nearly 70 years after its founding, through economic recessions and the changing tastes in home décor, Crystal Cabinet Works is as busy as ever, crafting 1,750 cabinets each week out of 15 species of wood.

The company ships its cabinets across the United States, from customers just a few miles away in central Minnesota to celebrities in Hollywood. Yet the viability of Crystal Cabinet Works, which employs 430 people and projects growth of 20 percent over the next three years, depends, in part, on the random patchwork of Internet service in Minnesota.

Currently, the company pays for separate Internet service at each of its three locations in and around this city of 4,700, which sits in both Sherburne and Mille Lacs counties. Some of its Internet capacity is hosted by servers in the Twin Cities. Its drafters, meanwhile, are limited by bandwidth constraints, as are the dealers who use the Internet to share kitchen and bath designs with the company.

All of those layers result in extra costs, delays and less productivity, said Sandy George, the company’s IT director. “At some point, if this is not addressed soon, it will become a serious business issue,” she said.

In numerous pockets of rural Minnesota, some close or even in the Twin Cities region, many businesses and residents live with unreliable, slow or expensive Internet service, a problem that affects all sorts of people, businesses and agencies — including clinics that need to send immediate X-rays, government agencies that issue licenses electronically, and college students who take online courses.

The situation has been likened to the lack of electricity in rural areas before the massive federal electrification movement of the 1930s that helped to modernize farms. Rather than a luxury afforded the largest and most urban, broadband is now recognized as a necessity of living and doing business in the 21st century. 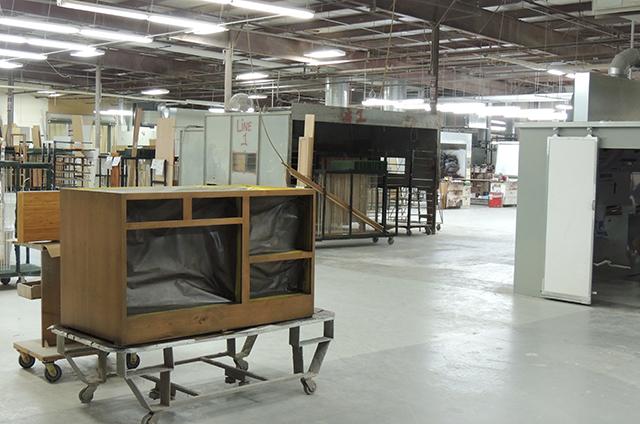 MinnPost photo by Gregg Aamot
Crystal Cabinet Works has 253,000 square-feet of workspace spread across two buildings just outside of Princeton.

“We are in a world economy,” said Richard Baker, Mille Lacs County’s community development coordinator. “We need that reliable access to the Internet.”

Bill Coleman, a broadband and economic development consultant, said he used to warn clients that they risked falling behind with slow Internet service. “Now, it’s the other way around; people are coming to me and telling me why they need it,” he said. 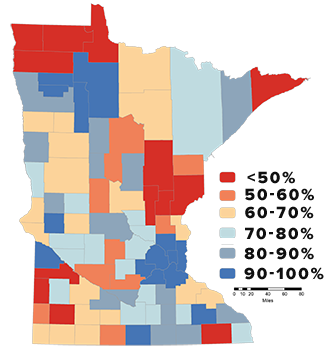 According to the state Department of Employment and Economic Development, 25 percent of rural Minnesota households lack Internet speed at the state goal of 10 megabits per second of “down” service (for material downloaded, or received, on a computer) and 5 megabits per second of “up” service (for material uploaded, or sent). Statewide the figure is 11 percent.

Internet service in Minnesota is provided by two types of organizations: for-profit companies that make money serving mostly populated areas (while struggling to serve rural areas) and cooperatives that have built networks over decades to serve the most rural regions. Many homes and businesses have fallen through the cracks in places where broadband service is either poor or nonexistent.

In 2014, the state of Minnesota handed out $20 million in grants for the spread of broadband access across the state. The funds went to 17 organizations, many of them rural telecommunications providers like Federated Telephone Cooperative in Big Stone County, which received $3.9 million dollars. Others receiving grants included Sjoberg Cable in Roseau County in far northwestern Minnesota and Dunnell Telephone Co. in the southern part of the state, along the border with Iowa.

So popular was the program that advocates returned to the Legislature in 2015, asking for $100 million for more broadband expansion. Gov. Mark Dayton ended up signing a bill that included just $10 million in broadband money, an amount that Baker, pausing and carefully choosing his words, called “disappointing.”

“I spent three years living in the Upper Peninsula in Michigan and people in the woods up there had higher speed than we have here!” he said.

Later this summer, Mille Lacs County officials will get the results of a feasibility study that they hope will create a road map for expanded service. Less than 60 percent of the residents in the county have adequate broadband service, said Baker, who noted that, without any changes, a rural resident with a quarter-mile-long driveway would have to pay about $1,500 just to have a fiber-optic line dug in and connected to his home.

A study led by the same Florida-based consultant being used in Mille Lacs County led to the creation of RS Fiber Cooperative, a $16 million project that will bring broadband to 20 cities in Renville, Sibley, Nicollet and McLeod Counties. A second, $30 million phase promises broadband service to farms in the surrounding townships by 2021.

In that project, cities and townships are kicking in $45 million, or 20 percent, of the cost, with various investors, state grants and federal aid covering the rest, said Mark Erickson, the director of the Economic Development Association in Winthrop. He called it “a very good grassroots project.”

The federal government, in April, announced that its Connect America Fund would grant $10 billion over the next six years to telecommunications companies in an effort to connect four million homes and businesses with broadband service.

“Even companies with 10 or 20 employees need high speed Internet service now. If communities don’t have Internet access readily available, you get crossed off the list when businesses are looking for places to expand,” Coleman said.

Last month, on a Friday afternoon at Crystal Cabinet Works, employees spread across the company’s 253,000 square-feet of work space, split between two buildings in an industrial park in Sherburne County, just outside the Princeton city limits, sawed and glued wood parts together. Other workers ran massive machines that carved divots and holes into pieces of wood, the sawdust sucked out of sight through huge ducts. 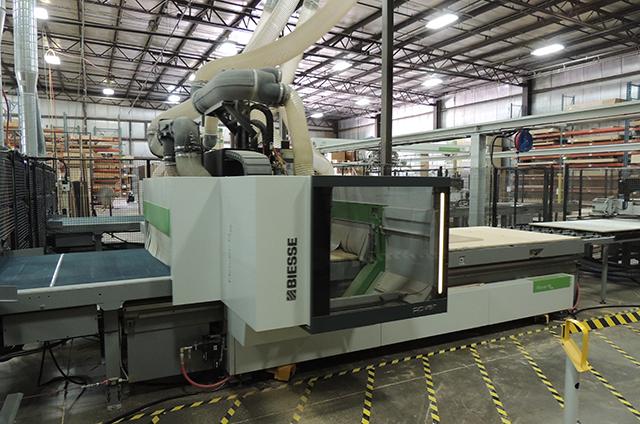 During the recent recession, the company cut its work force in half but is now back to producing the volume it was before the downturn, according to George.

Speedy Internet service is needed for all kinds of Crystal initiatives: so drafters can efficiently share cabinet designs; so dealers can use iPads and smartphones at training sessions in the company’s new Princeton training center; so the company can use more sophisticated software in the machines it uses to build cabinets.

The most noticeable added cost, George said, is the external hosting that must be done in the Twin Cities. Adequate bandwidth in the Princeton area would save the company several thousands of dollars each year, she said.

“It really limits our options as a business in terms of the software and the other products we can use because of the limited bandwidth,” she said. George is hopeful that the Mille Lacs County study will lead to a solution, saying she wanted to see “more of a community effort to push this local service.” 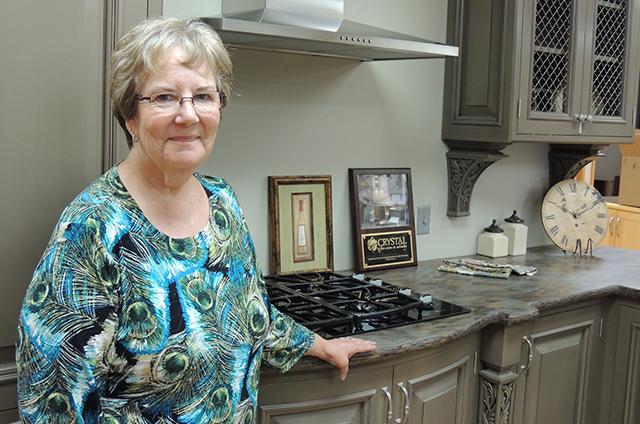 In Two Harbors: No longer a concern

On the edge of the Arrowhead region of Minnesota, in the town of Two Harbors along Lake Superior, Granite Gear outfits vacationers with outerwear and equipment before their entry into the Boundary Waters Canoe Area Wilderness.

The company was able to get broadband service through Lake Connections, a Lake County owned provider that began hooking Silver Lake and Two Harbors residents into broadband last summer.

“Before, we were all sharing a DSL line,” recalls Granite Gear manager Dave Johnson. “At the time, we had 15 people all sending emails or using the computer for basic functions. It was tough. Our art director, who had to upload higher resolution images, would come in at night so he could have all the bandwith to himself.”

“With fiber optic, it’s not a concern,” he said. “One gigabyte of file of photos can be uploaded in a few minutes rather than a few hours.”

The need for speed: Broadband, no longer a luxury, is still a patchwork as localities press for improvements