News
Rural Dispatches
Rural Dispatches is a yearlong series about the challenges and opportunities in Minnesota’s small towns, made possible by a grant from the Blandin Foundation.
Sept. 25, 2015

MOUNTAIN IRON, Minn. – In April of 2014, a plan hatched by three adjoining school districts to build a new high school on land in this small mining town fell through after the boards in two of the districts backed out of the talks.

The school would have housed students from the Mountain Iron-Buhl, Virginia and Eveleth-Gilbert districts while providing a measure of autonomy for each – through independent sports teams, for instance.

Part of the idea was to build a joint, regional school in the heart of the Iron Range while avoiding the kind of traditional consolidation that can sap the morale of communities that lose their schools. For a time, it appeared that the project might be eligible for money in a new fund, created from the taxes paid by taconite mines, for school districts that come up with creative proposals for working together.

“We felt, early on, that this joint school idea might be the signature project right out of the chute,” said Mark Phillips, the commissioner of the Iron Range Resources and Rehabilitation Board, or IRRRB, which has the power to approve projects that will receive the new taconite funding. “But it didn’t have grassroots support.”

Troy Martinson, the chair of the Mountain Iron-Buhl School Board, agreed. “I didn’t get a lot of positive spin on it from residents,” he said. “About 90 percent were like, `What are you doing?’ ‘This is not what the Range is all about.’ ‘We are small communities and we fight for our schools.’ ”

The Virginia and Eveleth-Gilbert school boards, under pressure from some of their constituents, eventually opted out of the negotiations. But though the idea fell through, it has generated a discussion on the Iron Range about how its small districts might work together – taking advantage of their unique position as beneficiaries of the mines – to build modern schools.

Hoping for mine money

The Legislature, hoping to spur innovation in aging Iron Range schools, created the school fund in 2014; Senate Majority Leader Tom Bakk, a powerful DFLer who backed the plan, is from the nearby town of Cook. The fund, which captures a sliver of the money generated by production and occupation taxes paid by the mines, currently has about $7.3 million and is expected to grow by another $9 million next year, according to the IRRRB.

The agency plans to review the law this fall and begin writing guidelines for projects that will be eligible for funding – welcome news to superintendents and school board members who have been waiting for some kind of guidance. The projects will have to meet a high bar as seven of the IRRRB’s nine members must sign off on any initiative before it can receive funding.

Phillips said he envisions many kinds of collaborations, from a sharing of transportation costs to investments in communications technology that will help districts share curriculum. He also pointed to the Applied Learning Institute in Virginia – which provides technical training through several high school and community and technical colleges – as an example of Iron Range innovation.

“If the statute was more specific, we could have put some guidelines out,” Phillips said.  “We aren’t trying to be coy because of some hidden agenda. We are just feeling our way and seeing what kind of ideas for collaboration will emerge.”

A school of their own

Iron Range mines have a deep history with local education, most visibly in the majestic schools that were built in cities across the region decades ago, largely on the strength of local property taxes generated by the mines.

Mountain Iron-Buhl High School – a beige, two-story brick structure with white trim – was built in 1910 and still operates as the district’s grades 7-12 campus, though it suffers from poor energy efficiency and other age-related problems, according to school officials. (Indeed, an addition that was built in 1956 is still referred to as the “new wing” of the school.) 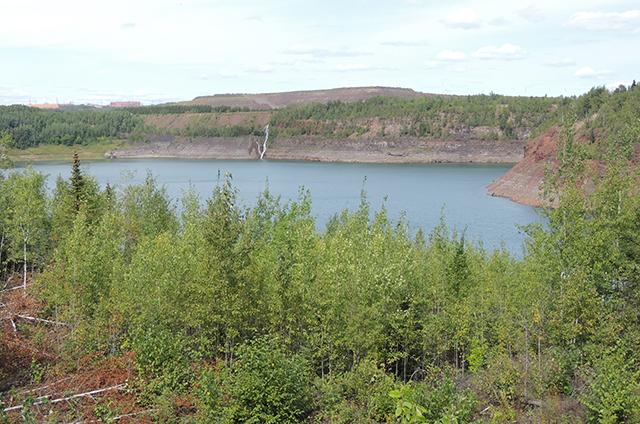 MinnPost photo by Gregg Aamot
A Mountain Iron park overlooks this iron ore pit on the edge of town. The Minntac taconite mine plant, owned by U.S. Steel Corp., can be seen in the distance.

As in other Iron Range towns, sections of Mountain Iron – houses, streets and all – have been moved over the years to accommodate new ore discoveries. But the high school remains near the city’s “Old Town,” just blocks from a park that overlooks a massive ore pit. Currently, miners blast ore out of the ground just a half-mile from the school – so close that students can hear and feel the explosions.

The failed “co-location” plan, as it was dubbed locally, sent Mountain Iron-Buhl officials back to the drawing board. Though recent graduating classes have had just 30 students or so, the district embarked on plans for a new high school. (The district experienced a slight uptick in enrollment this fall of 18 students in the elementary school and a half-dozen more in the high school).

Right now, the cost of the school, which would be located on a piece of land where the joint school would have been built, is estimated at $29 million; officials hope to know whether they will receive any money from the taconite fund before asking voters to approve a levy referendum in the spring.

“Based on what we learn (from the IRRRB), we can proceed from there,” Superintendent John Klarich said.

The closeness of Mountain Iron, Virginia, Eveleth and Gilbert, known collectively as the Quad Cities, reflects the way Iron Range towns developed, more than a century ago, around the mines. The cities meld together, suburban-like, in contrast to most rural Minnesota towns that are separated by miles of fields and lakes.

That proximity has created a tight-knit feel – as well as fierce loyalties and factions, most notably around high school sports, that go back generations.

“People so much relate to the school in their district and the alliances to sports and fine arts and competitions,” said Klarich, a 1969 graduate of Buhl High School (before the town just west of the Quad Cities merged with Mountain Iron).  “Up north, that is just the heritage of the people.”

He added, with a laugh: “You know, some people still hold grudges because somebody beat somebody else in 1965!  Hometown pride: it just seems like there is so much of it up here.” 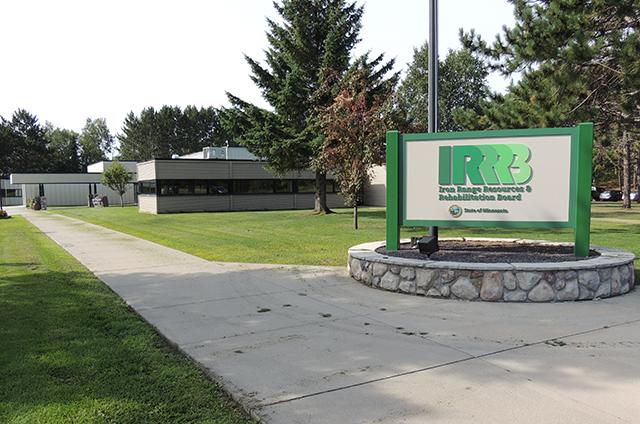 MinnPost photo by Gregg Aamot
The Iron Range Resources and Rehabilitation Board (IRRRB), which is based in Eveleth.

Mark Chad, a policeman who was elected to the Eveleth-Gilbert School Board last fall, said he remembers when Eveleth and Gilbert began “pairing and sharing” some programs before eventually consolidating.

“Just trying to choose the school colors threw everybody,” he said.

Yet, for all of those strong feelings about identity, several Iron Range districts have joined forces over the years, such as Aurora-Hoyt Lakes and Biwabik, which formed Mesabi East High School more than two decades ago. Some schools also have joint athletic teams, such as the Mesabi East/Virginia/Eveleth-Gilbert Nordic ski team.

While Mountain Iron-Buhl presses ahead with its new school proposal, the school boards in Virginia and Eveleth-Gilbert are working on strategic plans; one idea in the Eveleth-Gilbert district, Chad said, is an enhancement of its industrial arts courses, perhaps with another district.

Virginia school board member Stacey Sundquist ran for a seat on the board last fall, largely motivated by the co-location proposal and her concern that citizen input was being overlooked.

Sundquist, like many residents, said she feared the loss of community that would come with the closure of Virginia High School, which sits in the heart of the city of 9,100, just a few blocks from downtown. “What does that do to the landscape of the town if you take that piece out?” she asked. “There is a lot to be said about walking to school, walking downtown, seeing your community.”

Moreover, on a practical level, she said, the school employs a lot of Iron Rangers in a time of uncertainty about the mining economy. So while change is certain, she said, the challenge is to uncover new ideas and rethink what Iron Range schools can be.

“People are not opposed to some kind of consolidation or co-location,” Sundquist said.  “But to have three schools in one building – each school basically run independently?  I’m not sure that was the way to do it.”