News
Rural Dispatches
Rural Dispatches is a yearlong series about the challenges and opportunities in Minnesota’s small towns, made possible by a grant from the Blandin Foundation.
Feb. 1, 2016

CROSBY, Minn. – In 2014, when Amelia Udenberg began looking for a teaching job, she admits that she had her eye on a big city. And why not? She had grown up in Cloquet and gone to college at the University of Wisconsin’s campus in Superior, across the bay from Duluth. City life would be something new.

That career path took a turn, however, after the principal at Cuyuna Range Elementary School, which serves students from this town of 2,400 and a handful of nearby hamlets, offered her a job teaching the sixth grade. She accepted, ultimately drawn by the familiar feel of the deep woods, the promise of classroom innovation and a mentorship program that pairs new teachers with veterans.

“It was clear to me that they want talented teachers here,” she recalled of her initial job interview, “teachers who are looking to stay.”

Indeed, finding teachers, and keeping them around, will soon be at the top of the Crosby-Ironton School District’s to-do list. Over the next three years, the district expects to lose a third of its teaching force to retirement – inconveniently at a time when the number of applicants for recent job openings, a harbinger of interest, has been modest.

Hoping to build momentum, the district is embarking on an aggressive campaign to recruit candidates. The centerpiece of the initiative is a four-minute video that the district first broadcast online in December; the district is also distributing a glossy recruiting brochure and dispatching its two principals to the state’s teaching schools to meet directly with recent graduates.

The video spot, which appears on the school’s website, opens with a nod to the region’s natural beauty – a panoramic, overhead shot of lakes surrounded by forest that could be mistaken for Minnesota’s famed Boundary Waters. The clip generated nearly 600 views within a month or so of its first broadcast.

The district created a four-minute video promoting living in the area.

Early in the video, Michael Gindorff, a longtime teacher and coach in the district, appears on screen. “It’s a close-knit, up-and-coming community. Things are headed in the right direction,” he tells the viewer before ticking off a few other attributes: “Excellent hospital. Great schools. Safe place to raise your kids.”

About a year ago, the state Department of Education issued a 162-page “Teacher Supply and Demand” report [PDF], based on surveys of school officials across the state, that highlights some of the barriers schools often face in hiring teachers.

Some of the concerns deal with policy. For instance, here in what is defined as the “north central” region of the state, more than half of the districts reported that teacher testing requirements represented a “large barrier to hiring teachers.” In the “northwest” region, meanwhile, 68 percent of the districts said teacher licensing requirements represented such an obstacle. As a result, many districts end up short-staffed or using teachers who have received temporary permission from the state to fill certain disciplines.

Other sticking points identified in the report include teacher pay (a teacher fresh out of college could start with a salary as low as $37,500 in Crosby-Ironton); debt that saddles college graduates (and prevents some from entering the teaching profession); and the perceived lack of public esteem for teachers.

Yet perhaps most revealing — at least for the health of districts in the most remote parts of the state — is the litany of comments from district personnel, included in the report, about the challenges of attracting young teachers to small towns. 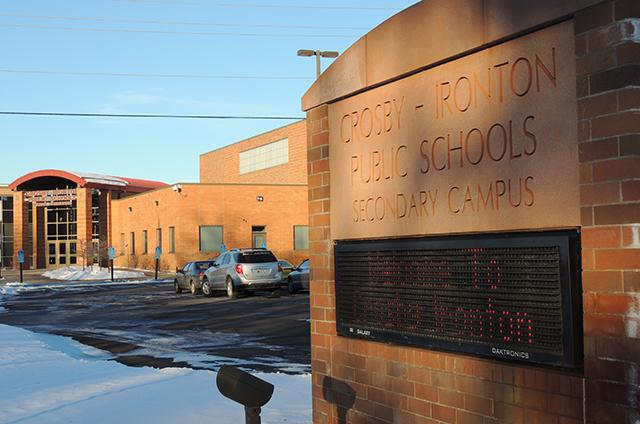 MinnPost photo by Gregg Aamot
The Crosby-Ironton Public Schools Secondary Campus, which includes the high school, is located in Crosby.

“Many people are not willing to move to a very rural area when jobs are available in other areas,” reads one comment. Another official wrote, “Geographic location of being a smaller rural school. New hires want the comforts and choices of a larger economic community.” Still another: “We are in a rural community, weather conditions are harsh, and young people are more attracted to the metro areas.”

Erin Doan, the executive director of the state Board of Teaching, the governing body that oversees teaching standards, said geography certainly factors into the teaching shortages some rural districts are experiencing. “For a lot of young teachers, being far from cultural centers isn’t as attractive as being close to big cities,” she said.

Adding to the troubles: Minnesota is granting fewer annual teaching licenses to college graduates than it was a decade ago.

Eleven years ago, teachers in the Crosby-Ironton School District were about to embark on a strike over salaries and promised benefits for retired teachers. The impasse lasted two months and grew bitter after the district began hiring substitute teachers.

These days, it’s not a labor dispute that threatens the vitality of the district, but an upcoming rash of retirements among Crosby-Ironton’s 75 teachers.

A bubble of baby boomers hired three decades ago is about to burst, with little to suggest that the district will be able to generate a deep pool of candidates to replace the retirees. Superintendent Jamie Skjeveland said that when he came to the district a decade ago, hired in the wake of the strike, he probably saw 200 to 250 applications for every open teaching position. Last year, in sharp contrast, the district had about 30 applications, total, for 14 openings, he said.

The dreary numbers caused some soul-searching throughout the district, which spent $4,500 on the recruitment video, created by a Stillwater firm, and another $1,500 on the brochure. “We had to ask ourselves, ‘Is there anything we can do?’” Skjeveland said. “Ultimately, we decided that we don’t just have to sit here and let this happen.”

Some economic incentives that could encourage young teachers to consider rural districts are emerging at the state level.

The Office of Higher Education is administering a $200,000 loan forgiveness program, passed during the 2015 legislative session, for teachers who accept jobs in areas that are struggling to find teachers. Gov. Mark Dayton’s administration had proposed an even bigger package – $25 million in forgivable loans for prospective teachers who agree to teach in shortage areas for four years.

The adjoining cities of Crosby and Ironton sit along the Cuyuna Iron Range, a stretch of buried ore that was discovered in 1895 and mined until the late 20th century. (Crosby is about 75 miles southwest of Hibbing, which sits at the center of the better-known Mesabi Iron Range). Despite its remote feel, Crosby is just 15 miles to the east of Brainerd, a regional center of about 20,000 people (including its adjoining city, Baxter) and the gateway to the popular Whitefish Chain of Lakes. 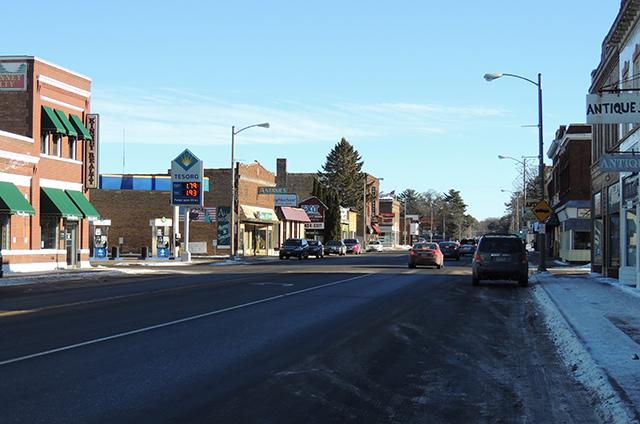 MinnPost photo by Gregg Aamot
Despite its remote feel, Crosby is just 15 miles to the east of Brainerd.

Michael Gindorff grew up and went to school here. By the time he left to study and play football at Concordia College in Moorhead, in 1987, the mines had closed. These days, the old mine lands have been turned into popular hiking and mountain bike trails; one popular shop in Crosby is Cycle Path and Paddle, which leases bikes, canoes and kayaks.

A few years after college, after teaching in Isle on the southeast side of Lake Mille Lacs, Gindorff ended up back in his hometown; his wife, Wendy, landed a teaching job at Cuyuna Elementary School and he soon followed. He now teaches biology at the high school and coaches the varsity football team.

The Gindorffs have raised two children whose successes were chronicled in the Crosby-Ironton Courier the day a reporter visited. The paper noted, in its year-end wrap up, that their daughter, Abby, had been the 2015 class co-valedictorian; the paper also reported that son Noah scored 22 points in the basketball team’s recent win over Fond du Lac Ojibwe. 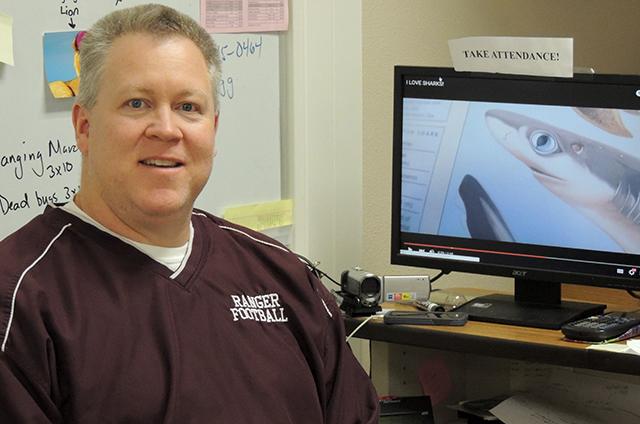 Theirs is an appealing story about the possibilities of rural life and small schools, and both Wendy and Michael Gindorff are featured in the recruiting video.

Yet Michael Gindorff knows that recent college graduates – millennials bred on the broadening appeal of digital technology – are probably thinking less about roots and family and more about life experiences. So the district’s message is likely to reach only some. “You really have to have a special interest in the outdoors to live here,” he said.

When Udenberg isn’t teaching, or coaching students in a hands-on after-school program called Destination Imagination, she likes to fish and hunt (though she didn’t get a deer this year, she noted with a smiley shrug). She also plays the flute in the community band.

Kurt Becker, the principal of the elementary school, will soon be looking for more people like Udenberg when he begins visiting the Minnesota colleges and universities that train teachers. (First stop: Bemidji State University, in March). Part of his sales pitch will be the district’s focus on technology, such as the iPads provided to every third- through sixth-grader and the elementary school’s Creative Café, a classroom that encourages students to blend creativity with technical savvy.

Another part of his message may be a more difficult sell for young teachers: the idea of place as a piece of the compensation. But he believes in it.

A high school classmate with Michael Gindorff, Becker worked in Pierz and also in St. Francis, on the far outskirts of the Twin Cities, before accepting the principal job here and moving his wife and two children to his hometown.

“When I lived near the Twin Cities, I went to a lot of things, like everybody else,” he explained. “But being involved here, in a small district like this, doesn’t mean simply attending things. It means actually getting involved. You are not a spectator. You are not a participant. You are building things.”

He paused. “What will I say to them? ‘You can start and end a very long career right here.’ That’s what I will tell them.”

Help wanted: How one rural district is reaching out to young teachers