News
Rural Dispatches
Rural Dispatches is a yearlong series about the challenges and opportunities in Minnesota’s small towns, made possible by a grant from the Blandin Foundation.
May 13, 2016

MILROY, Minn. – On the first Sunday in May, the Milroy Irish opened their fifth season of play at Irish Yard, a baseball diamond carved into a soybean field on the outskirts of this southwestern Minnesota town.

About 60 fans showed up – a small weekend crowd by Irish standards, but decent considering the breezy, high-50s weather – to watch the Irish hold on for a 6-5 win over Stark, a tiny township that also fields a team in the state’s Class C amateur baseball division.

“It’s such a relaxing time to come out here and watch baseball,” said Caleb Krause, a college freshman whose family farm sits within view of the ballpark. Krause – home for the weekend and helping his younger brother, Amos, run the 20-foot-high, Green Monster-like scoreboard in left field – said he expected to attend many games this season.

“There’s not much else to do in the summer except watch baseball,” he said. “Besides, it’s still America’s pastime, isn’t it?”

Meanwhile, about six miles away, in the heart of Milroy, another ballpark stood empty, awaiting the May 11 home opener for the Yankees – the other team in this town of 252 residents.

Yes, in an era when baseball faces competition from emerging sports like lacrosse, when the cultural attractions of youth tend toward iPads and Netflix, when the population of small towns stagnates, Milroy has doubled down on tradition, fielding two amateur teams – known as “town teams” – for the eighth straight summer.

“These are just town-team guys who love baseball,” said Irish manager Bob Dolan, who spearheaded the creation of the upstart team and the building of Irish Yard. “Some played in college, or they might have been all-area in high school but didn’t want to do the four-year college- season thing. So they play in the summer. They love the game.”

Though not the attraction it was in its halcyon days after World War II, when town teams might draw a few thousand fans for Sunday games in the region’s bigger towns, baseball still holds a special place here. Milroy, Marshall, Sleepy Eye, New Ulm – these cities and others have fielded local clubs dating back decades; a few hamlets in this region have even added teams in recent years. 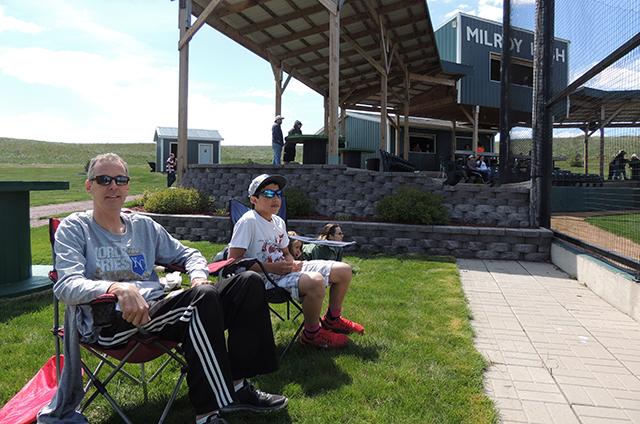 MinnPost photo by Gregg Aamot
Dennis Jensen, left, and his son Noah, of Marshall, watched the Milroy Irish take on Stark at Irish Yard, the team’s rural Milroy ballpark. Of Irish Yard, Dennis Jensen said: “It reminds me a lot of Field of Dreams.”

In many small towns across Minnesota, town teams – with their rosters of local players and coaches, some of them former high school or college stars – remain a source of pride, as well as recreation and entertainment. According to the Minnesota Baseball Association, Minnesota has about 320 town teams – about 50 inside the 494/694 metropolitan ring (Class A); another 45 in the state’s larger outstate towns (Class B); and 225 in smaller towns like Milroy (Class C).

Each year, the town ball season culminates in a state tournament for each class. Class A teams play in a tournament in the Twin Cities while Class B and Class C teams play in parallel tournaments – held at the same diamonds, usually in two or three nearby towns – over three weekends in August and September. Last year’s Class B and Class C tournaments, according to John Richter, the president of the Minnesota Baseball Association, drew about 15,000 fans to ballparks in Cold Spring and Watkins in central Minnesota. While official figures aren’t available, he said the tournaments generated as much as $80,000 in each host town.

“I really believe (amateur baseball) is in good shape. It’s very stable,” Richter said. “People still enjoy watching amateur baseball. As for the players, people are really health conscious, they want to stay active, their friends play. There are a lot of reasons for its popularity.”

The Irish were born partly out of need. So many young men from the area wanted to play baseball that there weren’t enough roster spots on the Yankees, Milroy’s longstanding amateur team. (Over the years, the Yankees have sometimes been referred to as “the Irish” due to the heritage of many of the players, giving the new team a link to the town’s history). 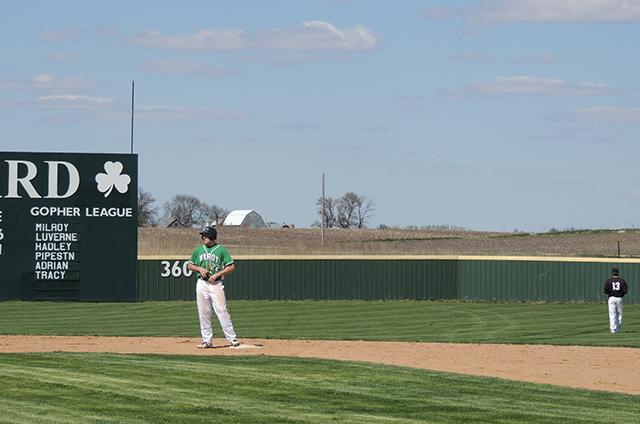 MinnPost photo by Gregg Aamot
Irish Yard was built on five-acres of a soybean field.

Troy Krause, who edits the Redwood Falls Gazette (Caleb and Amos are his sons), said baseball remains a strong presence in the small towns scattered throughout the region. (He noted, in a sign of shifting trends, that kids in Redwood Falls now play lacrosse, a game with Native American roots that got its start there with a boost from the Lower Sioux Indian Community).

Krause said many games in Milroy, Yankees or Irish, draw as many as 300 fans. Diehards take in both team’s games, spending their money on the modest admission (each team charges $3) and concessions. Irish fans can buy a $50 season pass, which gets them into every home game and covers the cost of a hot dog and a beer or soda.

Milroy Ballpark, the Yankees’ home since 1955, sits at the south end of town next to the Church of St. Michael. A few years ago, the team spent $25,000 in donations to cover the old wooden bleachers with a green grandstand. The Yankees also recently built a new outfield fence – which is plastered with advertisements – and added more lights.

The team’s storied past is on display on the outside wall of the first-base dugout, which lists the years the Yankees have appeared in the state tournament, including 1954, when they won the championship. 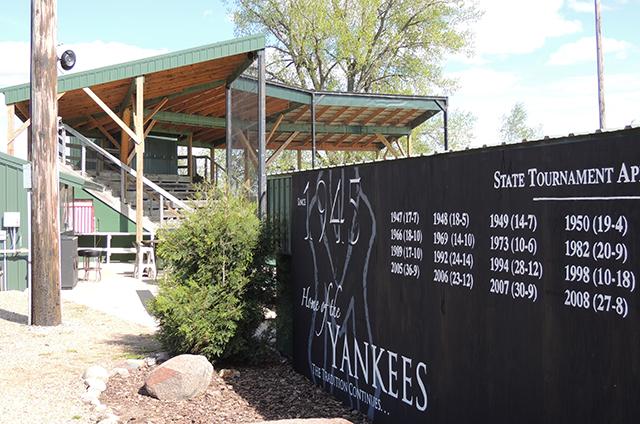 MinnPost photo by Gregg Aamot
The first base dugout at the ballpark in Milroy lists the state tournament appearances of the town’s other team – the Yankees.

Brian Dolan, Bob Dolan’s second cousin, once removed, has played for the Yankees for 21 seasons. Brian Dolan said that when he joined the team, just two towns within 25 miles of Milroy had teams – Marshall (which had two teams at the time) and Granite Falls. Since then, besides the birth of the Irish, Lamberton and Tracy have revived their clubs.  Ruthton and Cottonwood plan to begin fielding teams this summer.

“It’s just awesome that we are bringing back some of these teams that we had back in the ‘60s and ‘70s,” Brian Dolan said.

Most of the players on the Yankees and Irish rosters played high school baseball, a few played college ball at nearby Southwest Minnesota State University, in Marshall, an NCAA Division II program, or at other schools. All remain devoted to a game played by many of their fathers, cousins and grandfathers, a lineage evident on the teams’ rosters, which list nine Dolans, three players named Duetz, three Taylors and a pair of Rileys.

For their first season, in 2009, the Irish played at Southwest Minnesota State, unable to reach an agreement with the Yankees on sharing Milroy’s original ballpark. Playing in Marshall, though, never felt quite right for a team with Milroy in its name, so Bob Dolan and his brother, Neil, began looking for land for a stadium. When Jim and Kathy Zwaschka, who live across a gravel road from Bob Dolan, offered to sell five acres, the brothers jumped at the chance.

Building the ballpark cost about $90,000, some of which came from local businesses and residents. The Minnesota Twins also helped out, providing a $10,000 Fields for Kids grant from its Community Fund, since Irish Yard would also host games played by American Legion and VFW teams (summer teams for teenagers).

To pay off loans taken out to fund part of the construction, players and others involved with the team made several trips to Target Field and the Hubert H. Humphrey Metrodome to work at the concession stands during Twins and Vikings games. Those trips each raised $1,200 to $1,500, Bob Dolan said. 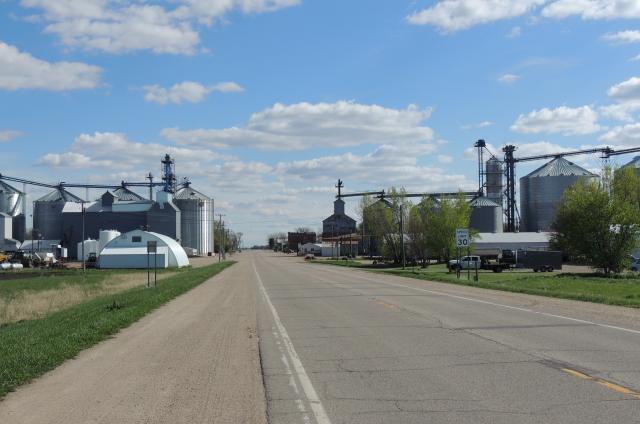 Meanwhile, volunteers provided much of the labor, hauling truckloads of agri-lime from Mankato for the infield and Blue Clay Pro’s Choice – the type of packing clay used at Target Field – from the Twin Cities for the pitching mound and batter’s box. Avera Marshall Regional Medical Center donated part of a garage for use as the press box and Dolan rounded up 72 discarded seats from Camden Yards – yep, where the Orioles play – from an Illinois business for installation beneath the grandstand.

“I can’t even count the people who have helped,” he said.

After getting a deal on lights from Southwest Minnesota State’s old football stadium, the team borrowed another $30,000 to buy poles and hire electricians, Dolan said. The team is slowly paying off that debt while eyeing another project: an $18,000 irrigation system to keep Irish Yard emerald-green.

Irish Yard is tucked nicely into its surroundings, bordered by a natural berm, on one side, and by the scoreboard and a massive batters eye that extends above the centerfield fence, on another. A farm can be seen in the distance beyond left field. The scoreboard provides an old-school touch, with scorekeepers dropping numbered squares into slots between innings. The Gopher Prairie league standings are displayed to the right of the line score.

“It reminds me a lot of Field of Dreams,” the iconic baseball movie about an Iowa farmer who builds a baseball diamond in his corn field, said Dennis Jensen of Marshall, who was watching the Milroy-Stark game with his son, Noah.

Some strong defense helped Milroy. In the fifth inning, leftfielder Derek Riley, a coach at Lakeview High School in Cottonwood, fielded a base hit and threw a perfect strike to catcher Dakota Freiborg, who applied the tag on a Stark runner trying to score from second, protecting a 5-0 Irish lead.

In the stands, Mark and Jan Kelly cheered.

“I’ve been to one Twins game in my life and never really had an interest in baseball, but I love to come here,” Jan Kelly said. “We sit in a beautiful park, it doesn’t cost much and we enjoy the sunshine.”

The Kellys live on a farm about seven miles from the ballpark, near the village of Walnut Grove.  They have three great-nephews on the team (Bob Dolan’s sons). Mark Kelly, sitting with his wife and two friends at a green wooden table painted with a white Shamrock (the seats in the shade of the grandstand were too cold), recounted a Thanksgiving get-together with some of the Dolans when all the talk was about baseball.

“Everything was about this bat and that glove,” he said. “It’s in their blood to play baseball.”