News
Rural Minnesota
This project is made possible by a grant from the Otto Bremer Foundation.
April 7, 2011

First in a series
Editor’s note: In the coming months, “Rural Minnesota: A Generation at the Crossroads” will feature both traditional stories and ongoing interactions with young people throughout the state. The project will explore their lives, the decisions they face, and how their choices might shape Greater Minnesota in the years to come. Today, Sharon Schmickle visits Pine County — where unemployment outpaces Minnesota’s and where just 9.2 percent of the work force have college degrees. Jacqueline Griffith’s options illustrate a common tradeoff — between a better paying job in a big city and ready access to the North Woods life that she loves. 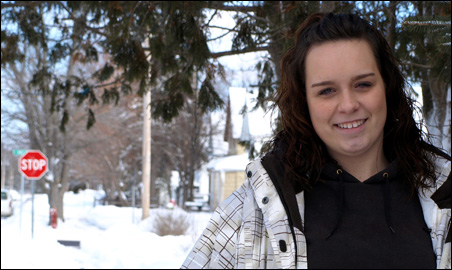 MinnPost photo by Sharon Schmickle
Jackie Griffith: “I would never want to live in a big city. You can’t see the stars at night.”

SANDSTONE, Minn. — For all of Jacqueline Griffith’s 22 years, Court Avenue has been home. Even while she was away at college, Jackie looked forward to weekends back on the street that runs through the heart of her hometown.

And Jackie is working for a future that will keep her very close to her past — if not right on Court Avenue, at least somewhere nearby.

Never mind that many generations of young Minnesotans have left hometowns like Sandstone and chased fortunes in Duluth, the Twin Cities or beyond.

Much as Jackie loves driving up to Duluth to hang out on Lake Superior’s waterfront, even that city is oversized for her comfort.

Even saddled with student loans close to $70,000, Jackie has a ready list of reasons to do everything she can to stay close to her roots.

In the living room of her parent’s brown, frame bungalow on Court Avenue, Jackie curled up her legs on the sofa to talk about the reasons. A deep dimple flexing in her chin punctuated her points. And her chestnut-colored curls framed a gaze as firm as her convictions about her future.

“I would never want to live in a big city,” she said. “There is too much commotion. There is not enough outdoors. You can’t see the stars at night. … I like my small town — being able to do things when I want to and not having to worry about things like traffic.”

Boyfriend and parents, hunting and fishing
Another big reason to stay close to Sandstone is Chris McClain, Jackie’s boyfriend. He lives in town.

The fact that he’s been shopping for an engagement ring is supposed to be a secret from Jackie.

“But he is horrible at keeping secrets,” Jackie said.

Their attraction to Sandstone goes way beyond parents, though.

Pine trees towering over the far ends of Court Avenue mark the gateways to a natural area that is a veritable playground for outdoor fanatics. Sandstone sits on the Kettle River, next door to Banning State Park, making it a hot spot for paddlers seeking the thrills of maneuvering their kayaks and canoes through glacial potholes and daredevil rapids. Also nearby are Grindstone Lake and several other good fishing spots.

“We have a secret hole on Fish Lake,” Jackie confided.

She loves fishing as long as you don’t make her sit for hours in a fish house — even a heated one.

But her love of the sport is nothing compared to her boyfriend’s all-consuming passion for fishing, and hunting, too.

“Three months before deer hunting season, he would go out to the field, walk around, look for deer tracks, site his gun,” she said. “Then for the whole season, he is out there.”

At his urging, she is learning to hunt with a bow and arrow.

Their idea of a great vacation is to hit a state park, hike the trails and fish the lakes.

“God’s Country” v. big paychecks
So like many Minnesotans who grew up in their own versions of “God’s Country,” Jackie’s choices force a tradeoff between a better paying job in a big city and ready access to the North Woods life.

Seen by the statistics, the job prospects in this region are almost as grim as they get in Minnesota. Pine County finished last year with an unemployment rate of 10.3 percent compared to 6.8 percent for the state as a whole (not seasonally adjusted). Kanabec County next door had a rate of 12.8 percent, the second highest in the state.

This region of Minnesota is older and poorer than the rest of the state. Pine County’s median income was $43,618 (in 2009 dollars) compared with $57,007 statewide. An estimated 13.6 percent of the county’s residents are poor, compared with 10 percent for the state.

Comb through census data, and you see a likely reason: Just 9.2 percent of Pine County residents have college degrees. The percentage for the state as a whole is 21.2 percent.

In short, Pine County illustrates the problem that has plagued Minnesota’s rural counties for generations: Kids leave after high-school graduation. And most of them never come back.

Jackie graduated from East Central High School in 2007. Her closest high-school friends have moved to Washington state, Arkansas and larger cities in Minnesota.

Jackie also went away for a while — to Oak Hills Christian College in Bemidji, where she majored in biblical studies and applied psychology. Her last requirement for graduation is an internship.

Where did she choose to do the internship? Sandstone, of course. At Pine Habilitation and Supported Employment Inc., she observes people with developmental disabilities and traumatic brain injuries. She does research on their conditions and their rehabilitation prospects.

Jobs cobbled together
In deciding to stay and build a life where so many others have left over the decades, Jackie is trusting in better days as the region pulls out of the recession.

Her boyfriend is jobless right now. Her father, Dan Griffith, commutes nearly 100 miles each way to work at a recycling facility in Eagan.

But an uncle returned to a job in Sandstone after several years away working in larger cities. And her mother found work managing the Ben Franklin store in town. 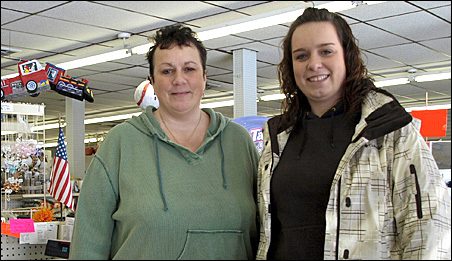 Jackie, herself, has never lacked for work.

She babysat through high school — not for money alone.

“I liked kids more than I liked sports,” she explained.

Throughout her college breaks she has clerked and stocked shelves at the Ben Franklin store. And she worked student jobs at college, most recently as a housekeeper.

‘A great little town, but …’
While her roots and her hopes are in Sandstone, she’s not looking at the town with any kind of rosy vision.

“It’s a great little town, but there is nothing really for teenagers to do,” she said.

She treated me to a tour of the town.

At one end of Court Avenue, a stately old school — built with sandstone, of course — stands vacant now, occupied only by student memories. She’s lived most of her life in that school’s shadow and she knows what’s inside every window.

Elsewhere, though, Sandstone is alive with the kind of businesses that many other small towns lost over the decades: a hardware store, a lumberyard, a bank, a Ford dealership, three restaurants (that I could see), grocery stores and an assortment of craft and candle shops catering to tourists as well as the locals.

One attraction is the Midwest Country Music Theatre, where some big-name country and western stars come to perform. When I was there the marquee billed the Shotgun Red Show.

Everywhere we went, Jackie knew the terrain the way no one person could know Minneapolis or any other large city.

At Movies & More, the town’s film-rental store, she knew what was on the shelves because she is a regular.

She knew the rhythms of Sandstone’s seasons. At the Ben Franklin, she and her mother — Mary Griffith — chatted about which goods would have to be moved to make room for the displays of Easter bunnies, baskets and candy.

When we stopped for lunch at Jan & Gary’s Country Dining she barely had to look at the menu.

“My grandparents used to take me here for breakfast all the time,” she said.

It’s a comfort-food kind of place where you can order hot sandwiches — beef, pork or meatloaf — served with mashed potatoes and smothered in gravy.

She ordered the BLT. I got chili and a tuna sandwich.

Sandstone also is the kind of town where everyone knows everyone else’s business — for better and for worse.

“The gossip that goes around is just horrible,” Jackie said. “I don’t partake … I just live in my own little world — go to work, spend time with my boyfriend and my family.”

Was it worth it?
The one thing Jackie doesn’t know for certain about Sandstone at this point is whether it has a job for her — something good enough to enable her to pay back her student loans and grow the family roots even stronger.

Determined as she is to shape her future in her own way, she expresses some recession-driven doubt: “Was it worth it to have gone through four years of school — to pay all of that money — if you can’t even find a job after all of the work you went through?”

But she quickly added, “With a psychology major I feel like I will have more doors open to me.”

FRIDAY: Hear more from rural Minnesota and find out how you can participate in  the project!