News
Rural Minnesota
This project is made possible by a grant from the Otto Bremer Foundation.
April 8, 2011 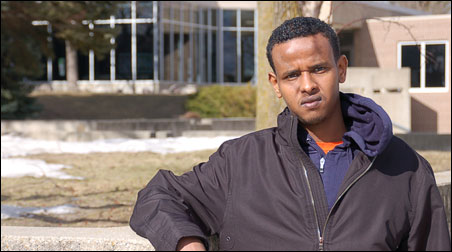 MinnPost photo by Gregg Aamot
Abdalla Mohamed, 22, a sophomore at Ridgewater College, is pictured in the courtyard of the college’s Willmar campus.

WILLMAR, Minn. — The 2010 U.S. Census shows that many Somali refugees who have settled in Minnesota are choosing to live in areas outside the Twin Cities metropolitan region such as Kandiyohi and Stearns counties.

MinnPost caught up with one of them — Abdalla Mohamed, 22, a sophomore at Ridgewater College. Mohamed was born in a small Somali town, grew up in Kenya and moved to the United States in his teens — first to California and then to Willmar, where his father got a job at the Jennie-O-Turkey Store, the well-known food processor. He has lived in Willmar for about five-and-a-half years, graduated from Willmar Senior High in 2008 and hopes to be the first in his family to earn a college degree.

Mohamed spoke with MinnPost about life in rural Minnesota, college and the prospects for a young refugee from Africa. (Full disclosure: he is a former student of this reporter):

MinnPost: You said you didn’t like it when you first came to Minnesota. Why?

Abdalla Mohamed: The year I came here it was snowing so much that I can’t even go outside. I would go to school and then come home and stay inside, you know? I liked to go to the YMCA and do some stuff, but I can’t go there because I can’t drive, you know, because I don’t have a permit.

MP: But over time you’ve come to like it?

AM: Yeah, I just like it. In the summertime, I can go outside and do some stuff, you know, like play soccer. The people here are nice. I like it here. When I came here not too many of my people lived here. A few, but not a lot. There’s getting to be more now.

MP: And you like living in a small town?

AM: Yeah. When I go to the (Twin) Cities, I don’t like it because, you know, a lot of people live there! I mean, Willmar is a nice place, oh yeah. A nice place.

MP: What’s it like being a Muslim in a community where most people are Christian?

AM: I mean, everybody has their own religion. We have our own mosque downtown where we pray all the time. Like five times a day we pray there and then Friday we come there — all the Somalis come there and get together.

MP: Do you feel that people are suspicious of you because you are a Muslim?

AM: No, no. No one says, you know, why are you guys doing this or why are you here or whatever. I feel like it’s nice people who are living here.

MP: In the long run, where do you see yourself living?

AM: I want to live here. I will be finishing my two-year at Ridgewater and then I’m going to St. Cloud State next fall. I feel comfortable here, in the Willmar area. Yes, when I’m done with school I’ll come back and find a job here.

MP: Do you have any interest in going back to Somalia?

AM: The first year was difficult for me, you know, because I have to write papers and all of that. There was a lot of homework and I have a job, too. I mean, in college they give you time — the whole week or two weeks to do a paper. In high school you get homework every day and you just turn it in the next morning. But here it is different. You’re on your own and you have to make sure you get it done. So it was hard for me.

MP: What do you eventually want to do for a career?

AM: My major is going to be, like, international Relations. I was going to be a social worker first, but I changed my mind. With international relations, you would work with immigrant people — kind of like a translator or an interpreter or something like that. And there is international business, too.

MP: What do you see happening with your life after college?

Gregg Aamot is a former newsman for The Associated Press and the author of “The New Minnesotans: Stories of Immigrants and Refugees.” He is a journalism and English instructor at Ridgewater College and Southwest Minnesota State University.