News
Rural Minnesota
This project is made possible by a grant from the Otto Bremer Foundation.
May 12, 2011 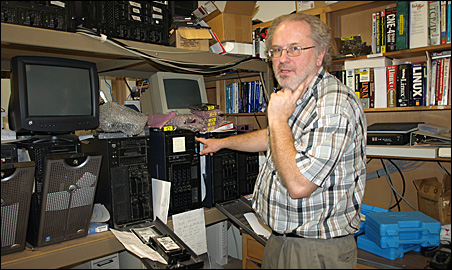 MinnPost photo by Sharon Schmickle
Under Leonard Runck’s supervision, students maintain a network that includes servers at the high school and wireless access points installed atop grain elevators and silos.

LAMBERTON, Minn. — When a windstorm knocked out the Internet service on the Swenhaugen farm near Walnut Grove, the call for help rang on a phone just behind the library at Red Rock Central High School.

And Leonard Runck knew where to find technicians in a hurry. They were coming out of morning classes.

“They are going to take off with a tool box and make it back in time for their next class,” said Runck, the school’s technical adviser.

High-school seniors effectively function as the Internet Service Provider for some 500 businesses and families in the Southwestern Minnesota region surrounding Lamberton.

Under Runck’s supervision, the students maintain a network that includes servers at the high school and wireless access points installed atop grain elevators and silos. They monitor the network, install antennas at subscribers’ homes and troubleshoot when problems arise.

‘We were being left behind’
It is one community’s innovative response to an urgent need to connect isolated farms and small towns to the Internet. 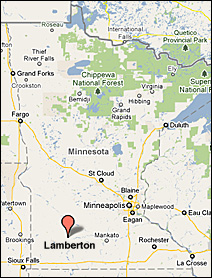 “We were being left behind,” said Runck, who launched the project in the 1990s. “We couldn’t even get dial-up locally. … It’s getting tougher to run the network now because everyone wants more speed. But with a bunch of high-school kids, we are keeping it running.”

It’s easy to see why high-school kids would like to work or even hang out in the network’s headquarters, a small room tucked behind the school library. It’s jammed with electronic gear, and computers are readily available.

Andrew Engen, 18, says a lot of the troubleshooting and maintenance he does on the network requires as much common sense as it does technical skill. For kids who have worked on farms, “fixing stuff” is second nature — especially now, when tractors come with GPS devices and farmers count on Palm Pilots to map tile lines in their fields.

Still, Andrew said his network experience “will definitely help” move him toward his goal of getting a degree in computer science or telecommunications from the University of Minnesota. 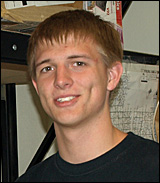 Remote locations, same needs
Minnesota law says that every resident and business should have access to high-speed broadband connections by 2015.

But obeying that law will not be easy on farms that are scattered for miles along rural roads — and even for towns that are too small to generate the profits commercial providers expect from their investments in Internet infrastructure. Laying fiber to every rural home and farm will cost millions of dollars that many communities simply do not have.

Still, kids living in those homes have the same connectivity needs as their counterparts in wired cities. The Internet factors into almost everything they do at school — whether it involves research for a class project, emailing a teacher with a question or taking a test online.

And the well-being of their families depends on their parents’ abilities to go online in order to monitor grain prices, apply for jobs or take advantage of the health care that regional medical centers increasingly deliver online.

A network on silos and grain elevators
The response to those needs in Lamberton is RRCNET, a nonprofit organized by Runck. Basic charges for subscribers run $19.95 for dial-up service and $29.95 for higher-speed wireless.

Meadowland Farmers Co-op in Lamberton helped set up 10 wireless access points. Two other local elevators — ADM in Sanborn and Cenex Harvest States in Tracy — each helped with one location. And four area farmers allowed equipment to be perched atop their silos.

In addition to running the network, students maintain a website featuring community announcements and daily updates on corn and soybean prices.

“For now we hold our own,” Runck said. “But we have our challenges, too, as far as what we can do for speeds for our customers.”

The top speed RRCNET delivers is about 3 megabits per second, Runck said. The state law calls for 10 to 20 mbps for downloads by 2015.

Technology transforming schools
Still, it’s an ambitious project for a school serving four rural communities, the largest of which is Lamberton, population 824 in the 2010 Census. While the school has a separate system for connecting to the Internet, the RRCNET students help maintain that, too.

Anyone who graduated from high school a generation ago in a town like Lamberton would be amazed at the transformation technology has brought to the classrooms.

Take the math class where Brian Walker is the teacher. He and students work problems on a “smart board” that gives them instant feedback, along with relevant graphic illustrations. Parents can log into his home page and see the lesson plans as well as the grades for each of their individual students. And the students can call up the lesson plan and associated problems while working in the media center or at home.

Take the yearbook as a second example. Gone are the days when students and advisers would cut and paste photos and text for their yearbook.

“We do it entirely online,” said Melody Altermatt, the English and German teacher who also serves as yearbook advisor.

Experience, pocket money and more
For the community at large, RRCNET was built on the premise that a connected community does better by several measures and connected students do better in school.

It also provides students with some pocket money. They earn minimum wage for the hours they work on the system.

Above all, they get hands-on experience in a line of work that might be a mystery to their parents but certainly relates to the future for a broad range of jobs.

Jordan Wolf, 18, helps out on the farm east of Jeffers, where his family raises cattle and grows wheat, corn and soybeans. Increasingly, that involves the use of computers to plot field plans and analyze yields. 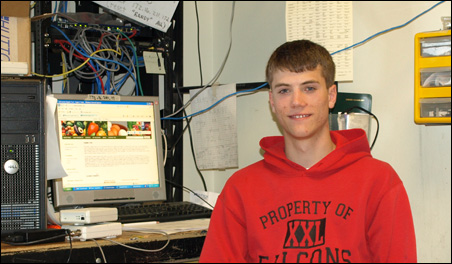 “First, I’d like to go to college and graduate with a major in electrical engineering and a minor in computer science,” he said.

He credits his RRCNET job with giving him a step toward that goal.

“We monitor the network and make sure people’s Internet is working,” he said. “If it’s not working we go out to the houses and do multiple tests. … This helps me get acquainted with the computers and other technology.”

College in the community
The network also has enabled Jordan and other students at Red Rock High to take college-level courses such as a speech and composition class he is taking to complete his high-school English requirements.

Jordan uses computers at school and at home to do his research for the college-level classes. And he emails assignments to a teacher who lives 40 miles away.

The college option is routinely available to Minnesota high-school students who live in cities with university and technical campuses nearby. It’s not always so readily available, though, for students in a setting like Lamberton, where the nearest university is 60 miles away in Marshall.

Now, 19 of some 43 seniors are taking college classes in Lamberton.

“We were out here where there are not a lot of options,” said Jenifer Goblish, a teacher who guides the students through the college-level studies.

Jacob Moravec, 18, wants go to technical college and study diesel mechanics, another field that has been computerized.

Beyond the technical skills he’s learned at RRCNET, he’s picked up some business savvy, too.

“I’ve learned to talk to people on the phone,” he said. “And since I started working here my typing has improved.”

Connected little houses on the prairie
When the white phone on the wall at RRCNET headquarters rang with the call from the Swenhaugen farm, Tyler Erickson and George Rogotzke pulled together a set of tools and jumped in a pickup parked just outside the school.

Both students are 18-year-old farm kids. George wants to study business management at Augustana College in South Dakota; Tyler’s goal is to get an agribusiness degree from Southwest Minnesota State University in Marshall.

At the Swenhaugens’ white frame farmhouse, they climbed onto a deck above the porch where the wind had turned the network antenna away from the signal it’s supposed to receive. They righted the antenna, fastened it securely in place and then headed back to school. 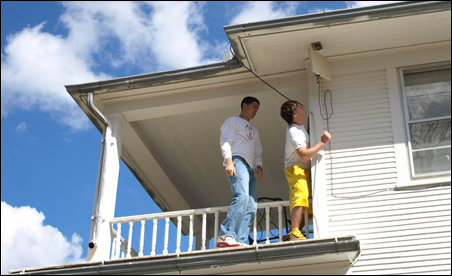 Their route took them through Walnut Grove, the childhood home of Laura Ingalls Wilder.

Riding shotgun with these innovative kids, I couldn’t help wonder what she might have written about this new generation groping to connect with a cyber frontier. It’s a far different story — not nearly so dramatic in terms of danger and human sacrifice.

Still, this new day on the prairie poses critical challenges along with exciting opportunities.

Friday: A Steve Date video on four FFA members from Redwood Falls and Morris, Minn.; and Jeff Severns Guntzel interviews a tech-savvy youth on the Iron Range who wants to move on.